$RAINBOW is a hyper-deflationary, ethical DeFi token sitting on the Binance Smart Chain which combines 7 features into a single cryptoasset. It is a project launched on the 18th August 2021 and is developed and maintained by a team situated in the UK. It has developed and launched Bifrost, a decentralized token launchpad service that specializes in user friendliness, flexibility and low fees.

What are the tokenomics of $RAINBOW?

$RAINBOW takes 7 colors, and assigns each of them a special protocol that is built into the tokenomics of the smart contract.

The red protocol is the burning protocol, where a part of each transaction is immediately and permanently burned straight to the dead address.

The orange protocol is the buyback protocol, which collects BNB inside of contract incrementally to then be used automatically to buy back tokens after each and every sell.

The yellow protocol is autonomous reflection. This works by "reflecting" a portion of each transaction back to every single holder based on the percentage of the total supply that they own.

The green protocol takes a portion of each transaction and uses it for donating to community-voted charities. The charity process is voted in by the community at intervals so that we can effectively give back to multiple different areas of need such as animal welfare, poverty, ecosystem preservation and healthcare!

The blue protocol is dedicated to automatically growing the size of the liquidity pool. The larger liquidity means that in the long run the token will more effectively retain its value.

The indigo protocol is a cut that is taken for the development team to cover business and marketing expenses.

The violet protocol is an automatic built-in giveaway system, which rewards a random transaction recipient with an amount of tokens!

What is the utility of $RAINBOW?

RAINBOW plans to develop a decentralized platform service called Bifrost that allows users to launch their own tokens in a safe way. It wishes to improve upon current solutions, with a particular focus on reduced fees. 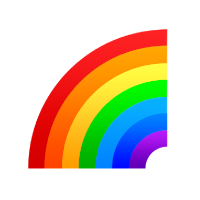