Litecoin is a fork of Bitcoin — but how do the two currencies fare when compared side-by-side? 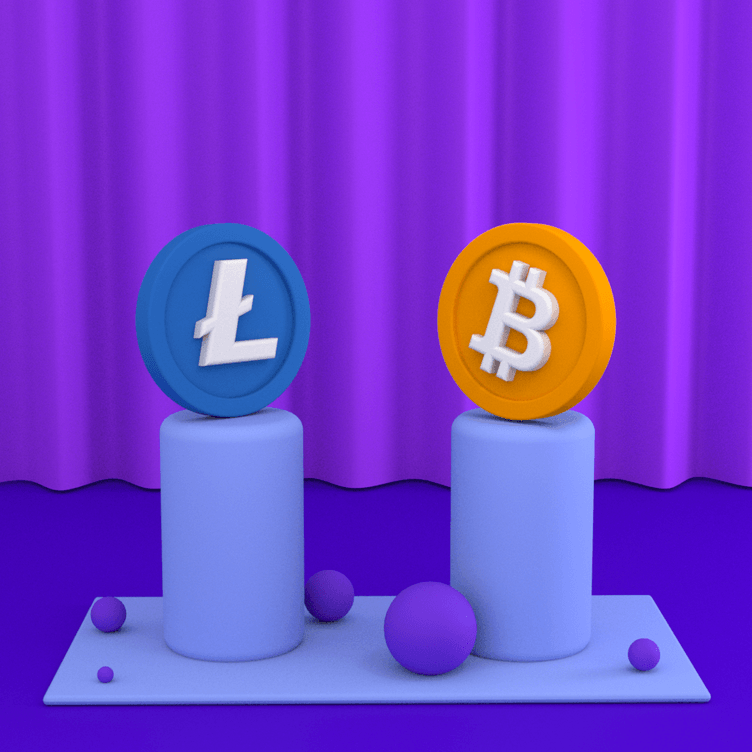 ‍Bitcoin and Litecoin are two of the most veteran cryptocurrencies, with the former launching in 2009 and the latter soon after, in 2011. Charlie Lee, a former Google engineer, presented Litecoin at its launch as the “light version of Bitcoin.”
Over the years, as new cryptocurrencies proliferate and attract ever more attention, both coins still remain highly popular. Bitcoin, of course, still occupies the top spot and remains the largest cryptocurrency by market cap.
Litecoin, meanwhile, hovers around 14th place (as of June 2021) and has been overtaken by newer currencies that have dominated the news cycle in recent times, such as Dogecoin and Binance Coin. However, Litecoin has held its ground as a sound crypto investment that has offered an incredible ROI to its long-term holders.

These two cryptocurrencies have a lot in common, but there are also stark contrasts that have fed into their very different positions in the wider crypto market. This article offers a comparison between Bitcoin and Litecoin to help readers to clarify how they are different and what could be next for these two currencies.

The Bitcoin and Litecoin Blockchains

At the highest level, Bitcoin and Litecoin are extremely similar. They are both decentralized cryptocurrencies created to support peer-to-peer (P2P) transactions. They are designed to serve as a medium of exchange and store of value while removing the need for a central party to serve as a guarantor, e.g. a central bank.
Both coins’ similarity is reflected in their respective monikers, with Litecoin referred to as the silver to Bitcoin’s “digital gold.” Litecoin’s open-source network positions itself as a “proven medium of commerce complementary to Bitcoin.” In short, Litecoin emerged with the intention of offering a pared-down version of Bitcoin in terms of ease of mining, faster transactions and lower transaction fees.

Bitcoin and Litecoin are both cryptocurrencies that use a proof-of-work (PoW) consensus mechanism to add new blocks to the blockchain. However, the algorithms behind this mechanism are quite different, as Litecoin’s is less complex and requires a lower hash rate.
Bitcoin’s algorithm is called SHA-256; Litecoin’s is called Scrypt. SHA was originally designed by the United States National Security Agency in 2001. Scrypt offers a less complex but more memory-intensive mining process. The inner workings of Bitcoin and Litecoin are thus very similar, with similar governing principles. They both require an immense amount of computing power to mine blocks on the main chain. Some consider that the inefficiency of this process has been improved upon with the emergence of new protocols, such as proof-of-stake (PoS).

A Bitcoin block will generally house around 1,500 transactions. Both Bitcoin and Litecoin have an original block size limit of 1MB. However, these limits can be superseded by using off-chain or layer 2 solutions to improve scalability. Bitcoin Cash, another cryptocurrency, is a hard fork that first updated its chain’s block size limit to 8MB and later 32MB.

Litecoin was created in part to boost transaction speeds, offering an average of two and a half minutes for the block to be fully verified and added to the Litecoin blockchain. This difference in speed isn’t of consequence to many, although some merchants do prefer a faster speed so that they are immediately sure that a given transaction has been executed and verified.

Both Litecoin and Bitcoin are designed to provide a limited supply of currency that cannot be surpassed. Bitcoin’s is set at 21 million BTC, whereas Litecoin’s is 84 million LTC. Once all the coins on the blockchain have been mined, the supply limit will have been reached.

It’s estimated that the very last BTC won’t be mined until the year 2100, due to difficulty adjustments that are designed to keep the rate of new block creation stable. It’s estimated that Litecoin’s supply limit will be reached around roughly the same time.

BTC and LTC rewards for mining blocks are designed to halve at given intervals — every 210,000 blocks for Bitcoin and every 840,000 for Litecoin. This is a deflationary strategy designed to preserve the value of the coins through scarcity.

As mentioned, both Litecoin and Bitcoin miners operate within a PoW-based system but Litecoin demands less computing power thanks to its simplified algorithm. Litecoin makes it easier for miners to participate in the network without the need for specialized hardware, enabling even those with a private computer to mine easily.

What’s Next for Litecoin & Bitcoin?

There are many value predictions for both Litecoin and Bitcoin that range from highly conservative to extremely bullish. Both of these currencies are likely to retain their place as leaders in the crypto market, although there are some who believe that rivals like Ether could eventually overtake Bitcoin and seize the top spot.

Both currencies and communities will undoubtedly grow their users and community of miners, developers and node supporters. Litecoin transactions will likely increase as the blockchain supports an extremely low-cost P2P payment option. Bitcoin, for its part, will likely keep its role as digital gold due to its prestige as the first cryptocurrency.

Crypto Basics
What Is a Cryptocurrency Index Fund?
Cryptocurrency index funds allow investors to gain diversified exposure to the digital asset market at a relatively lower cost.
Por Daniel Phillips
1 day ago
8m
Crypto Basics
How Does Proof-of-History (PoH) Work?
Proof-of-History, or PoH, is a novel technique used in blockchain systems to ensure that historical data is accurate and hasn’t been (and cannot be) tampered with.
Por Daniel Phillips
1 week ago
9m
Crypto Basics
Week in DeFi: Lending Protocols Ship, a Bustling Cosmos and Proof-of-Innocence
Check out our weekly roundup packed full of DeFi tweets, news and alpha you don't want to miss out on — as protocols continue to ship amidst the consolidation of the recent rally.
Por 0xKira
1 week ago
5m
See all articles