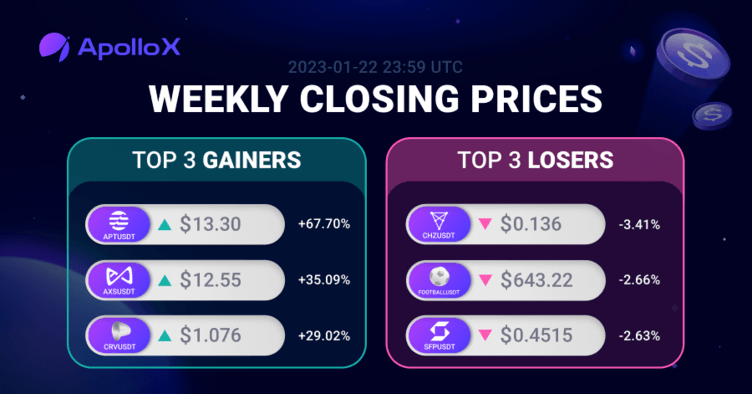 APT, the token of the Aptos blockchain, saw an increase in price of over 60% in the last 7 days as NFT collections on Aptos attracted spikes in trading volume in the past week. Meanwhile, the native token of fan token platform Socios, CHZ, dropped over 3% in the last 7 days.

BTC price traded within the $20.5k and $21.5k range for most of the week. On Jan. 22, BTC saw its best 2023 price of $23.3k briefly, but closed the week below $23k. In the derivatives market, Bitcoin open interest increased by $834 million this week as compared to last week, on renewed optimism following positive price action. Aggregated funding rates remain positive as well. Over $642 million short positions and over $535 million long positions were liquidated this week. Around $235 million shorts were liquidated on Jan. 20 alone when BTC pumped.

Risk Reminder: Crypto trading carries a risk. All trading activities are done at your discretion and at your own risk. The information here should not be regarded as financial or investment advice from ApolloX. ApolloX will not be liable for any loss that might arise from your use of any financial product.

As the District0x platform builds a user-friendly ecosystem in the crypto space, the native token DNT achieves the potential to add six times its current value.

Top 5 DeFi Tokens to Watch Out This Week

top five DeFi tokens that have to be kept an eye on as the token is showing signs of growth.