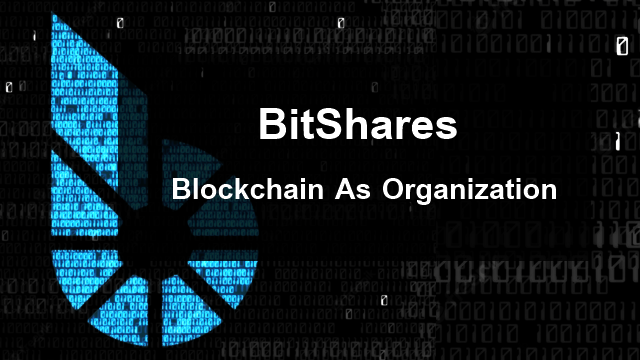 BitShares Blockchain is a decentralized “Blockchain As Organization” (BAO); an industrial-grade decentralized Web 3.0 platform built to run high-performance financial means and smart contracts. It represents the first decentralized autonomous community that enables its core token holders to decide its future direction along with financial technology products.

BitShares includes a decentralized asset exchange of a high-performance nature. This exchange is capable of handling the same trading volume as the NASDAQ yet settles orders the same second that they are submitted and includes features you want from your trading platform.

BitShares allows individuals and companies to create and issue their own tokens for anything they can imagine. On the one hand, UIAs can be used as simple event tickets deposited on the customers mobile phone to pass the entrance of a concert. On the other hand, they can be used for crowd funding, ownership tracking or even to sell equity of a company in form of stock. Obviously, the regulations that apply to each kind of token vary widely and are often different in every jurisdiction. Hence, BitShares comes with tools that allow issuers to remain compliant with all applicable regulations when issuing assets assuming regulators allow such assets in the first place.

While many of the transactions on the BitShares exchange will involve trading SmartCoins, users can trade nearly anything. Provided an asset has enough interest, there are minimal limits to what users can trade. Examples include cryptocurrencies, national currencies, oil, gas, silver, and gold. The exchange has support for assets that track inflation, indexes, bonds, and stocks. Companies even have the ability to issue their own stock using the BitShares network then offer low-cost trading that includes protection from naked shorting.

The Dynamic Account Permissions are a key technology of BitShares. They are the result of BitShares designing permissions based on people as opposed to cryptography. This makes it possible for accounts to be controlled via weighted combinations of private keys and other accounts. The hierarchical structure involved was designed to mimic real-life permissions and allow for simpler multiuser control of funds. It is this multiuser control that dramatically enhances security and can almost completely eliminate risks of hacking-related thefts.

One of the many areas in which BitShares stands out from other smart contract platforms is in its support for scheduled as well as recurring payments. Thanks to this feature, users can set up authorization for a third party to withdrawal from their account given certain limits. It is particularly useful for monthly subscriptions and bills.

Like many other blockchain-based platforms, BitShares offers a referral program with rewards. This advanced referral program is actually built right into the software. As a financial network, it benefits both BitShares and every user on the network if more people use the platform. With the referral program, you can get $80 or more for each Lifetime Member that you get to sign up. Specifically, Lifetime Members will pay $100 and get 80 percent cash back for each fee that they pay. If they refer a Basic Account to the network, they get 80 percent of those fees, as well.

Corporate shares are heavily regulated by the SEC, but none of those regulations prevent them from being issued or traded on an alternative trading system. The regulations in many jurisdictions require all shares to be registered (aka held by known identities). The BitShares blockchain corporate shares can be used as collateral for a bond or be used in any number of smart contracts.

Event tickets are a largely unregulated use case for user-issued assets. Tickets to a school play could be issued as digital tokens that are auctioned off to the highest bidder, who would then resell them. This ensures that the ticket issuer raises as much money as possible up front, while transferring the risk of ticket sales on to speculators.

Software and music licenses can be made transferable by issuing them as a digital asset. Every copy of a program can check to make sure that the user has control of a token before running. Software implementing such a licensing scheme can remain functional even if the company that produced the license goes out of business.

To understand more about BitShares; you can chat with other member of the BitShares community in real time at: @BitSharesGroup
You can find the official releases at: Official GitHub

Until now, Fringe has used Compound’s interest rate model, which can be optimized to improve capital efficiency. We’ve developed an improved model, which will be deployed to Mainnet SOON™.

This Black Friday, set up a Beldex masternode at a discount on Pecunia platform, a leading masternode hosting service provider.

How brands are using NFTs for marketing

Because consumers are spending more money on digital assets and consuming more virtual content, brands are looking for ways to use NFTs to market their goods and services.

8 Real-life Applications of Blockchain in Healthcare

Blockchain technology has the potential to improve healthcare.