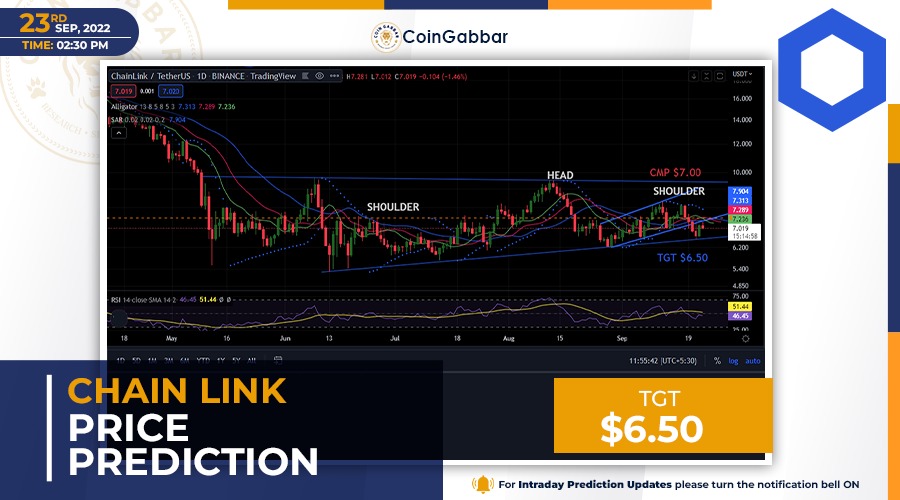 This suggests the price is becoming more sensitive to movement towards either extreme indicating declining.

ChainLink price analysis suggests that the market has gone completely bearish, gaining unfavourable impact momentum, indicating a drop for the LINK market. ChainLink's pricing has remained negative in recent hours. Today, the price dropped from $7.28 to $7.00. However, the market recovered quickly and returned most of its value. Furthermore, ChainLink has risen to $7.03.

ChainLink price analysis reveals the market's volatility after a decreasing movement, indicating that ChainLink's price is becoming less prone to experiencing variable change on either extreme.

The upper limit of the Bollinger band is $8.19, which serves as the strongest resistance for LINK. In contrast, the bottom limit of Bollinger's range is $6.56, which is the most significant support for LINK.

The price of LINK/USD appears to be falling below the Moving Average, indicating a bearish trend.. Furthermore, the market's trend seems to have moved to the downside in recent days. As a result, the market has selected to adopt a bearish approach.

The hourly RSI has risen to 47.12, indicating that it is nearing the overbought zone. Because the signal line is below the histogram, the MACD indicator is now in the negative zone.

On the upside, resistance is situated at $7.40. The next significant resistance is near $7.80. A clear break over the $7.80 resistance level might signal the start of a fresh upswing. In this situation, the price might break beyond the $8.20 barrier. Any additional rises might drive the price up to the $9.50 barrier.

If LINK fails to break through the $7.40 barrier, it may fall further. On the downside, the initial support level is $7.00. The next significant support level is $6.60. A break below the $6.60 support level might lead to another sharp drop. In the   aforementioned scenario, the price may fall to around $5.40.

As CHAINLINK faces resistance from the channel line, the bears are weighing heavily on the bulls. Have you looked at the graph?