What is Hash Rate and why does it matter?

What is Hash Rate and why does it matter? 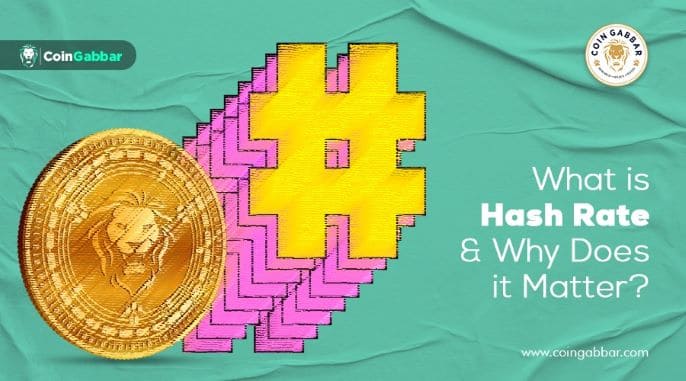 All cryptocurrencies work without an intermediary, so their transactions are completed through the blockchain network made up of miners. Due to the presence of a cryptographic layer in the blockchain, miners have to solve complex mathematical puzzles to validate a block.

Thus, crypto mining requires machines with high computing and GPU power. The hash rate is like a metric for the computational power required for mining. It assesses the security and health of a cryptocurrency network. Here's a closer look at the hash rate and what you should know about this critical parameter.

What is Hash Rate?

The term "hash rate" refers to the total amount of processing power utilised to mine and process transactions on a Proof-of-Work(PoW) blockchain. It is the number of miners working to validate transactions and the speed with which they can create hashes. It is used to determine how quickly a cryptocurrency miner's machines solve these computations.

“Hash” in hash rate refers to a fixed-length alphanumeric code that is used to represent any length of words, messages, or data. A cryptographic hash is generated after the validation of every transaction. Crypto projects employ some hashing algorithms to generate various forms of hash code. For example, Bitcoin uses the SHA256 algorithm for the creation of hash codes. Think of them as random word generators, with each technique representing a unique system for creating random words.

A high hash rate is considered to be favourable for all the miners in the network. Hash rate is directly proportional to a miner's or mining pool's profitability. A better hash rate indicates a greater probability of mining a block. As a result, there is a greater chance of obtaining the block reward for miners.

The hash rate is a measure of the number of calculations that can be completed per second, which may be expressed in billions, trillions, quadrillions, and quintillions and is denoted by the notations:

Hash rates vary from network to network and even miner to miner because of the speed of the machines utilized and the number of miners in a network. For example, Bitcoin measures the hash rate in exahashes per second (EH/s) and Ethereum’s hash rate is measured in terahashes per second (TH/s).

The entire network hash rate is estimated by comparing the average time between mined blocks to the network difficulty at a certain point in time. For example, if the Bitcoin network has a hash rate of about 250 EH/s, which means that all miners on the network are computing the output of the SHA-256 cryptographic hash function about 250 quintillion times per second on average.

Network Security: The value of the hash rate tells us how secure a cryptocurrency's mining network is. The rule is straightforward: the greater the hash rate, the more secure the network. This is due to an increase in the power required to carry off a 51% attack. Because such computational power can only be attained by thousands of miners, which makes the attack almost impossible.

As a result, many experts pay close attention to a cryptocurrency's worldwide hash rate to determine its safety. In reality, some cryptocurrencies have been victims of 51% attacks because their hash rates are so low that they may be effectively controlled by a single miner. This is basically impossible in the case of Bitcoin because its global hash rate can only be determined in one way: gigantic and unreachable by a single attacker.

As the global Bitcoin blockchain hash rate increases, the time necessary for the network to produce new blocks may decrease. Miners may be able to resolve hashes faster with the network's increased power. As a result, miners may wind up producing blocks at dizzying speeds.

The hash rate of a single device is an important indicator for determining the profitability of a mining setup since it influences the possibility of discovering a "good" hash that will result in a mining payout.

The entire hash rate of a cryptocurrency network, on the other hand, is an indicator of that coin's security: in order to hack the network for personal benefit, attackers must surpass its whole hash power, which is almost impossible at high enough hash rates.