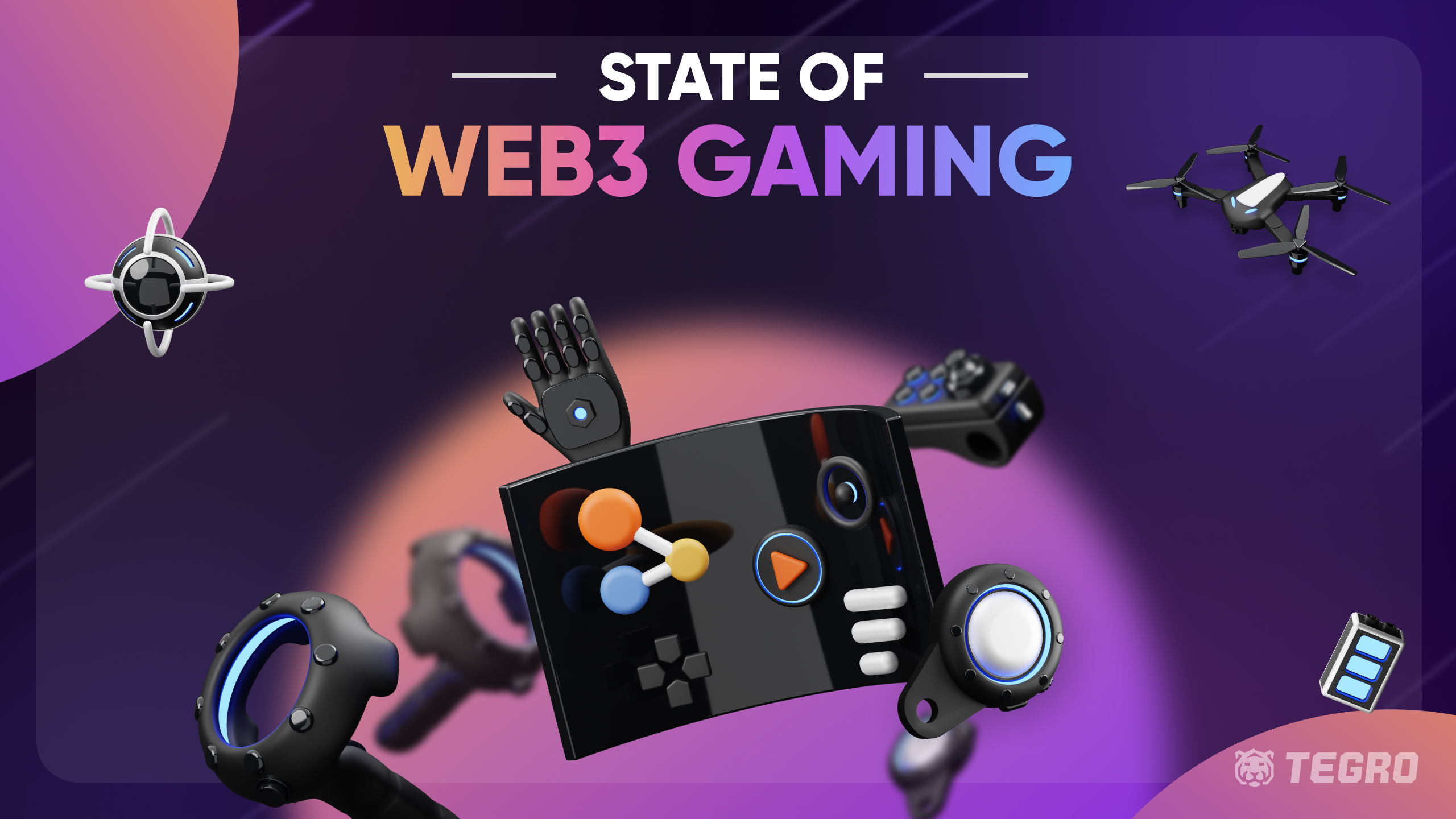 Web3 is a natural fit for gaming.

Historically, gaming has been arguably the most proactive industry when it comes to adapting to new technology. We at Tegro believe that the internet is gradually turning into a super nation economy and that the addition of a financial layer to gaming is inevitable. Web3 technologies like blockchain make this development possible. Last week we called some of our friends to discuss the current state of Web3 gaming. The speakers included @aiko, a research analyst for Folius Ventures, VC investor @romit.mehta, Alex from Footprint Analytics, and Tegro’s founder, Siddharth Menon(@BuddhaSource).

Here’s a recap for ya.

We asked the speakers to tell us one strongly held belief they have about Web3 gaming.

Here are their answers:

@buddhasource: Gaming is likely to be the industry that brings about mass adoption of crypto. The reason is that gamers are more familiar with the concept of digital assets than the general public.
@footprintanalytics: I think we’re very very early in the Web3 gaming space, and the true potential of this GameFi hasn't even been close to being reached yet.
@aiko: Crypto has the potential to change some of the exploitative monetisation practices of traditional gaming, such as microtransactions and in-app purchases.
@romitme: Any game needs an immersive universe, a sense of challenge, and rewarding function to be successful. The rewards that the game gives out to the players need not be money, but must have some value in the ecosystem of the game.

Since early 2022, the crypto market has been trending downwards due to harsh macroeconomic conditions and rising inflation. However, here are some statistics that indicate Web3 gaming builders are still creating despite the bear market: The total number of GameFi projects has touched 1582, which is an increase of 31% since January, 2022.

Millions of gamers around the world are now playing Web3 games. In the first half of the year, an average of 800,000 people connected with Web3 games on a daily basis. This also explains the statistics released by DappRadar, which showed nearly 60% of on-chain activity came from Web3 gaming apps.

Let’s talk about dominant chains in Web3 gaming. Alex tells us that Binance and Ethereum control 37% and 34% of the market share, respectively. Followed by Polygon at 10%, WAX at 7% and EOS at 4%. Binance’s exchange launchpad initiative has given it an edge over other layer 1 chains when it comes to gaming projects, according to Footprint Analytics.

While the WAX and Hive blockchains only control 7% of the market share, the number of active gamers on the chains is significantly higher than on other networks. This indicates that select games from these chains are outperforming other tittes in the space when it comes to user retention.

Looking at specific projects, we found that Splinterlands, built on the Hive blockchain, occupies 20% of the total active gamers. The rest of the market share for daily active gamers (DAGs) is scattered across various games.

Both Splinterlands and Alien Worlds have been at the top of the best blockchain games list for too long now. The lack of challenge to these market leaders suggests that people are being vigilant about experimenting with new projects and are only engaging with established games.

AAA-style Web3 games such as BigTime and Mirandus might soon change this scenario. According to Alex, there are only a handful of titites that are innovating in the space, whereas the rest of the market is filled with games that are plainly uncompetitive.

How To Rebuild After A Market Crash

According to Sid, a lot of what we are seeing right now feels like a deja vu of the market conditions from 2017-18. During that time, a lot of buzz was created by early publishers that were building Web3 games. A lot of these titles failed, and people lost a tonne of money. While analysing these games to understand why their economies collapsed, Sid realised that the market in which these games' assets were trading was drying up due to a lack of supply and demand for the asset.

If a game does not have a healthy market, then it should be an indicator that its economy itself is not healthy. Game developers should ensure that their market stays healthy by choosing assets that are highly liquid. Illiquid assets like NFTs choke up the market. Their use should be limited in the game to maintain market health.

Developers should design their game’s economy around low value, high frequency assets. Following this principle almost guarantees that there will be constant supply and demand for the game assets in the market.

Previously, game designers only needed to worry about creating immersive, engaging games. However, in Web3, they also need to work on creating sustainable game economies. It’s understandable that early game developers in the space face such a hard time because they’re building a completely new type of product.

From an investor's perspective, if a marketplace doesn’t give them liquidity, then the investor slowly loses trust in the product and desperately tries to pull back their investment. If this happens multiple times, then the liquidity also dries off from the market. Sid says that this issue of liquidity can be solved by replacing NFTs with fungible tokens as the primary game assets in the economy.

However, this doesn't mean we completely remove NFTs from the game as they can be used to create rare and more valuable assets in the economy. The emergence of new token standards such as ERC-1155 is also a great development for the space as they offer the best of both token types (FTs and NFTs).

Another useful framework for designing an economy is Maslow’s hierarchy of needs.

The base of the pyramid is a need-based economy, i.e. the basic items a person will require in the system. Then on top of that comes a want-based economy. This layer includes assets that are good to have but are not necessarily needed. Game designers should try to use more fungible tokens for need-based assets while leveraging NFTs for want-based items.

The first generation of Web3 games were Play to Earn (P2E) titles like Axie Infinity, Pegaxy Crabada, etc. In hindsight, we know that P2E is not a sustainable model for building long-term projects. Game developers are now experimenting with different business models. Recently, we saw publishers coming out with models like Free-to-Own and PlayFi, but it’s still too early to make any assessments of these models.

Another big change that’s happening right now is that Web3 game developers have started building higher quality games. Most early titles in the space were either click-to-earn grinds or had extremely boring rudimentary gameplay. Games like Star Atlas, BR1 Infinite, Big Time, and MetaOps are diametrically opposite to the titles that came before them. These are super fun, high-quality, engaging games that attract people with their fun gameplay, not with promises of making money.

Web3 Gaming is changing, but we still have a long way to go. Some important lessons that we have learned so far are that game economy design should be a priority for developers, engaging games are the key to adoption, excessive use of illiquid assets can choke a game’s economy, and that deep fluctuations in the market are completely normal for new asset classes. If you believe in an idea, go ahead and build it. The market will eventually recover.