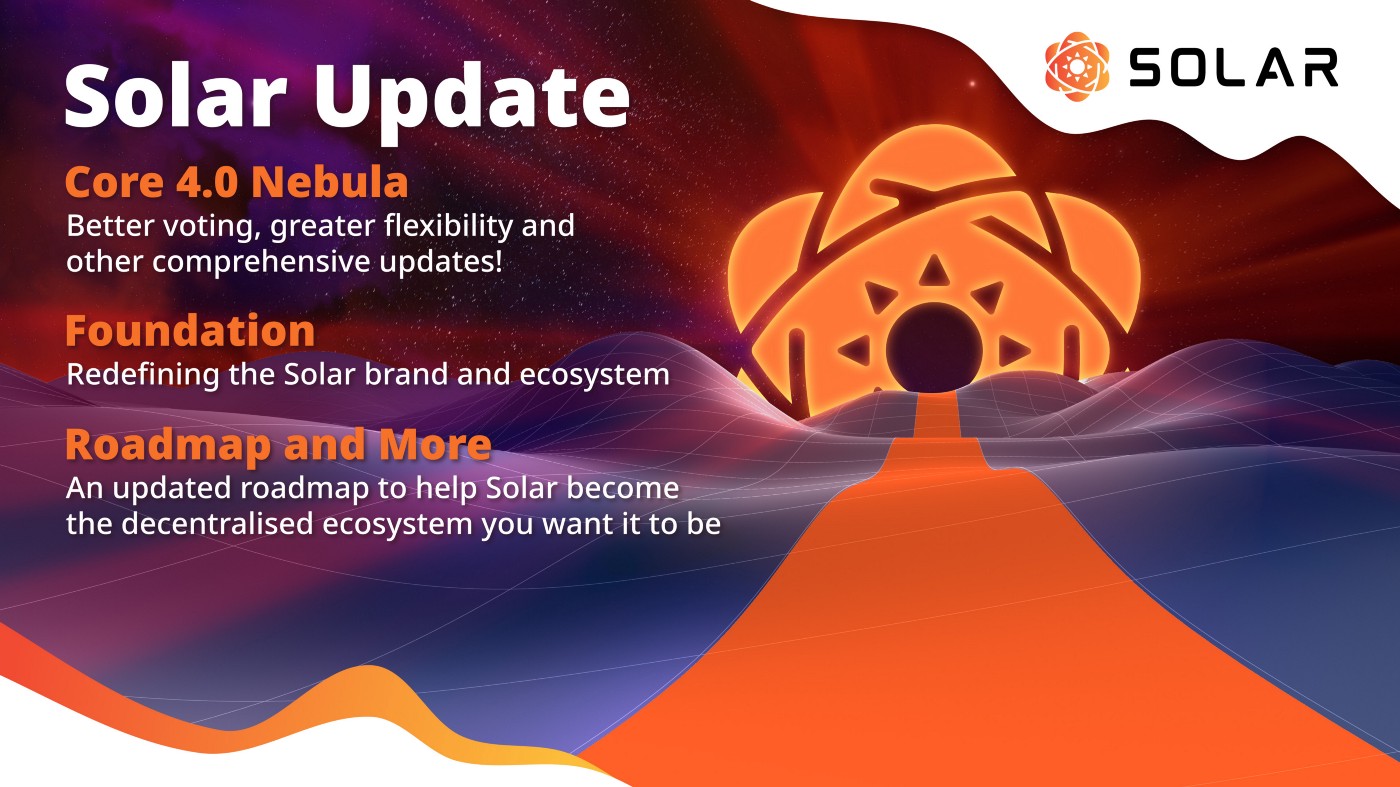 Hello everyone, as Q2 is almost over we wanted to give you an update on what we have been working on for the past quarter. It has been a quarter with many changes, updates and exciting developments for Solar. Let’s get started!

As we have been working on many items in parallel, we will start with a short summary of the items that have had our focus over the past months.

With regards to the development of the Solar ecosystem, this quarter has seen:

Partners and interested parties have been working with Solar, including:

Additionally, we have been actively spreading awareness of Solar by attending and hosting several events:

To expand our outreach, we will also be creating a forum (such as Discourse) to engage with the community and discuss community proposals for the Solar ecosystem.

One of the major items we have completed in Q2, next to releasing several minor version updates, is that we have now published our latest release of Solar Core, being version 4.0.0 codename “Nebula”. This is the most comprehensive update to Solar Core to date, and brings many new features and developments to you, our community. This release contains hundreds of bug fixes that are not immediately visible, making Solar Core more robust, updates to the API to improve UX and many new features of which we will discuss the most important ones here.

In earlier versions, one address could vote for one delegate. In this new version of Solar Core, we have created a new vote transaction that will allow you to assign a percentage of one balance to multiple delegates. This means you can now vote for multiple delegates from one address and you no longer need to split your balance across multiple wallets to do so (you still can, if you want to).

Fork recovery has become more resilient and nearly instantaneous, which means that if a fork occurs, the Solar Core will almost immediately recognise it no longer is in sync with the majority of the network and attempt a resync, strengthening the networks resilience.

The vendorfield has been renamed to memo and is now allowed on all transaction types, which means our implementation now follows the industry standard and making it more recognisable for new users and existing users alike.

Temporary delegate resignation has been added to give delegates the flexibility to step away from forging for a small while if they are unavailable, indisposed or unable to fix an issue in the short-term. These resignations can be revoked and will allow the delegate to return to forging (or being stand-by delegate) when they are available or have fixed their issue. Permanent resignation remains possible.

Over the past months we have been working on redefining the Solar brand and ecosystem. During the discussions and by examining our competitors, we have decided to make several changes to how the Solar project will be moving forward. These changes have not been taken lighthearted and we are certain they will change the future of Solar for the better.

First, we will be moving from a DAO to a foundation that supports the Solar ecosystem similar to how the Ethereum foundation supports Ethereum. We will be founding the foundation in the coming weeks. This foundation will be able to supply independent developers with funding through grants and community proposals. Anyone who wants to participate in growing and supporting the Solar ecosystem will be able to become a foundation member, as long as they meet the requirements that will be presented in a new update in July.

The Solar foundation will help with the developments of tools such as the explorer and wallets, but it won’t be in charge of the Metaverse, NFT marketplace or any implementation that burns SXP (the Solar Core-implemented 90% transaction fee burn will continue to exist as-is). These roadmap items will be handled by community developers that are not part of the foundation.

These changes are needed to be fully compliant with certain regulations and to avoid any potential risks that could classify SXP as a security and are also needed to comply with certain US exchange integrations.

As many of you will be interested to hear about, we have an update to our roadmap.

We have been shifting some of the items around as we feel they deserved our full attention. The Metaverse will be launched earlier than expected, whilst the mobile wallet and browser wallet will be released a bit later as they are pending review of the several browser extension & app stores.

Furthermore, no dates will be given for roadmap items to avoid disappointments, but also to avoid having people to speculate on price actions for given dates, which can again classify SXP as a security. We feel these actions will help Solar become the decentralised ecosystem you want it to be.

We are well aware that, despite the exciting changes, apologies are in order for the delay in the release of some of the roadmap items. As you can hopefully understand, our priority has been setting up the foundation to avoid any legal risks and comply with regulations.

A full whitepaper update, roadmap update and requirements to join the Solar Foundation will follow soon!

Thank you for reading.