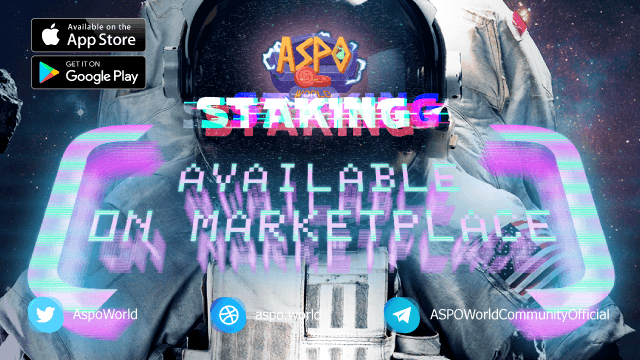 After constant fixes and reviews, the staking feature has been officially launched on ASPO World's Marketplace. Not just a place to buy and sell items, holders of ASPO tokens can now choose the appropriate staking packages and get returns from what they believe in.

Unlike some current NFT games on the market, ASPO World's staking mechanism gives users NFTs corresponding to the number of tokens staked by players. There are many reasons why we decided to use this form of staking instead of the traditional staking mechanism. The important and prerequisite factor is the issue of inflation is we want to limit as much inflation as possible for our native tokens. The form of staking tokens for NFTs will help holders and the project team to reduce inflation and excess of tokens when the number of tokens generated is always kept in balance between supply and demand. The value of the token is therefore maintained or even increased, bringing many investment benefits to our stakeholders.

In addition to playing games to earn more passive income as the principle of NFT games, users can now use the all-new staking feature on ASPO World's marketplace as a safe store of token value. Specifically, for non-gamer investors, the staking feature allows them to still invest and get returns on their investment to make profits in an extremely simple way. Our staking also supports some players who own too many ASPO tokens. They can stake out NFTs to reinvest in the game, using them as raw materials to upgrade their spirits. For players who invest in the ASPO World gaming universe with long-term goals and long-term commitment, staking is a worthwhile choice to keep the token from depreciating.

What are Roboshuttles and why invest in them?

Why You Should Keep an Eye on Sifchain

Sifchain is making big moves to be the first on Cosmos to connect to the top 25+ blockchains.

a year ago
•
4 mins read
Announcements

With the Delegation Dashboard, ICE Poker NFT holders now have native guild tooling immediately at their fingertips to effectively manage and scale their own guild.

After great anticipation, Moonbeam, the fully Ethereum-compatible smart contract platform on Polkadot, has completed its launch process to Polkadot.

DeFi Innovates At A Blistering Pace As Regulators Take Action

a year ago
•
6 mins read
See all articles