The motivation behind our biggest Airdrop ever

The motivation behind our biggest Airdrop ever 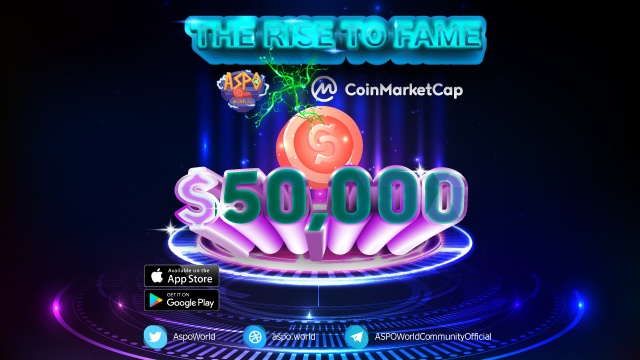 Only has been officially launched for less than 5 months, ASPO World has received many positive reviews and feedbacks from the gaming community and investors. With a gameplay imbued with tactical thinking and quality images, graphics as well as sound effects, ASPO team has succeeded in building a game product that’s going to exceed any user’s expectations.

However, besides investment and product development, we also want to build a strong community of players, where language or geographical barriers no longer exist. To realize that and bring the project closer to the community, we are gradually placing more focusing on gaining new users. Among all the plans we’ve had, the most powerful step is ASPO's monumental airdrop event on the CoinMarketCap – one of the best websites tracking the whole cryptocurrency market today. We’ve decided to name the campaign “The Rise To Fame” because we’re going to use this as an occasion to let people have a better understanding of ASPO World and join us on the journey to becoming the next unicorn on the world map. “The Rise To Fame” will take place for 2 weeks from January 5, 2022 to January 19, 2022. With a total prize value of up to $50,000. ASPO's Airdrop program has so far received the interest of more than 1 million players (at the time of writing).

By running the airdrop program on CoinMarketCap, the development team wants ASPO World to approach more people, not only professional gamers, investors but also the traditional gamers who want to earn more passive income from playing games while being entertained. Join ASPO World and try your luck us on the biggest airdrop on CoinMarketCap with the link below:

Everything you need to know about $AVG, Avocado Guild’s token for governance and rewards.

Our partnership with DigitalEyes (DE) has been nothing short of prestigious. DE is an online, open marketplace for buying and selling NFTs - and now includes a secondary marketplace for SNS.

a year ago
•
2 mins read
See all articles