This week’s crypto Twitter action shows us that nowadays, even the sweet embrace of death is not enough to free one from having to promote NFT releases. 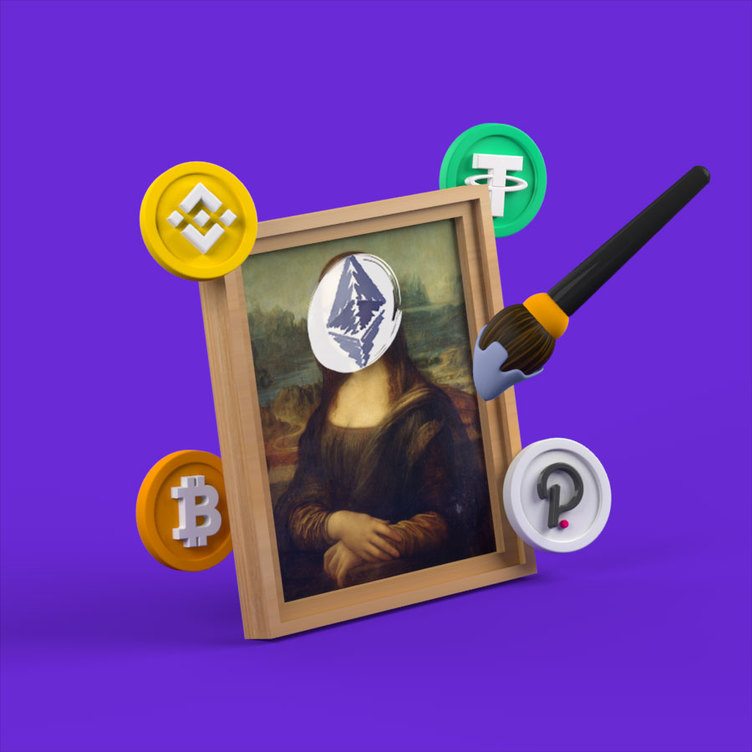 In the week since our previous crypto Twitter roundup, the market has been characterized by mostly sideways movement with a slight hint of a decline. All major coins are down on the seven-day timescale: Bitcoin (BTC) has lost 4.71%, Ethereum (ETH) is down 14.64% and Binance Coin (BNB) — 9.43%.
The combined crypto market cap went down by 7.2% from $1.815 trillion to $1.683 trillion. While by no means similar to the spectacular crash and burn of last week, this week’s stale performance of the markets was reflected by the unchanging state of the crypto Twitter conversation which remains largely dominated by the topic of non-fungible tokens (NFTs).

Opening this week are two equally ridiculous stories of celebrity NFT scams. First up is CryptoBatz, an NFT collection dropped towards the end of last year by the English heavy metal icon Ozzy Osbourne.

Recently, the project conducted a migration between two Discord servers where they manage most of the community interactions — something that should have been a fairly inconsequential event, a mere technicality, but instead turned into a disaster due to the fact that CryptoBatz forgot to delete the outdated server.

As a result, it got taken over by scammers, leading to a phishing attack that fooled potentially hundreds of Ozzy’s fans into parting with their crypto assets:

Another one is MetaNetflix, a project whose upcoming “announcement” was promoted by the American celebrity of many talents, Lindsay Lohan. It is hard to identify the exact nature of MetaNetflix because, ironically, Lohan’s now-deleted vague tweet represents one of the better-preserved documents proving its brief existence. One of the descriptions still available online states that it was supposed to become a platform for “content creators to buy and sell NFTs.”

Likewise, we will never be able to tell with certainty whether the abrupt rug pull followed by a social media disappearance act is supposed to represent the exciting announcement that Lohan teased in her tweet.
In another NFT rug pull, the people behind the Blockverse project, promising to build a play-to-earn game on top of Minecraft, have deleted their website and Discord server and disappeared — but not before managing to secure $1.2 million worth of ETH in funding, despite not having done any actual work on the game.

In more depressing NFT news, a collection of non-fungible tokens themed around previously-unreleased photographs from the rock band Nirvana’s 1991 gig in Philadelphia was announced to be dropped on the birthday of the band’s deceased frontman Kurt Cobain.

Many of Nirvana’s fans expressed their predictable concern over the announcement, considering the fact that Cobain’s lyrics and personal statements often reflected a deeply anti-capitalist and anti-consumerist philosophy back when the band was active.

The newly announced collection is admittedly not as ghoulish as some of the worst NFT releases of the past months — like the one where the artwork of a dead artist was stolen and sold by scammers not related to the deceased in any way whatsoever — but not by much, considering that the sole distinction lies in the mere legality of the whole affair.
Speaking of greedy corporations sucking the fun out of and ruining everything, Nicolas Pouard, the vice president of a subdivision of Ubisoft (which is one of the best-known names in the video game industry, albeit not for releasing good games, as of late) has made the rounds on crypto Twitter this week.

Pouard gave an interview, trying to explain away the disaster of a launch that was Ubisoft’s new Quartz service, which promised gamers an opportunity to collect and trade NFTs associated with unique in-game items like weapons and apparel.

According to the VP, the almost universal criticism and ridicule hurled at the announcement by Ubisoft’s entire customer base is a result of them “not getting it.” Undoubtedly proving Pouard’s assessment, the public has demonstrated an immense misunderstanding of the promise of NFTs in video games, producing a whopping $380 in token sales in the first week of Quartz’s operation (compare to Ubisoft’s $6.52 billion market cap).
Even the traditionally toothless and corporate-friendly video game press fired shots at Ubisoft over the VP’s ridiculous interview:

Another NFT announcement was made this week by Gwyneth Paltrow, an American actress and entrepreneur known by a number of prominent roles, but also as the founder of the lifestyle and alternative medicine brand goop. Paltrow has revealed her purchase of one of the bored apes of the Bored Ape Yacht Club, currently the hottest NFT collection out there.

If an endorsement from a woman who, at one point, sold vaginal detox eggs at $66 a pop, and then paid a $145,000 court settlement after the eggs’ advertised healing qualities had been scientifically proven as nonsense, is not enough to convince you that NFTs are the next big thing — then we don’t know what is.
Yet another American celebrity Paris Hilton — known, among other things, for being famous — went on The Tonight Show, hosted by Jimmy Fallon, this week to promote her new NFT collection. Hilton’s thoroughly uninspired performance has prompted a few funny responses on Twitter:

Rounding out this week’s NFT tweets is not an announcement or an interview, but rather an observation — one that potentially suggests that the grassroots interest towards the non-fungible tokens is not as strong, perhaps, as the numerous celebrity tweets might seem to indicate:

Moving on, our favorite Twitter bros Elon Musk (CEO of Tesla and SpaceX, among many other things) and Nayib Bukele (president of El Salvador) make a return this week, both with McDonald’s-themed tweets, for some reason.

In what is probably the least audacious wager in humankind’s storied run so far, Musk said that he will eat a McD’s Happy Meal on TV if the fast-food chain starts accepting Dogecoin (DOGE) as payment.
Musk’s tweet is reminiscent of another, much earlier bet, made by a different, now-deceased entrepreneur, which also involved eating something on live TV in support of a cryptocurrency he loved — and frankly, Musk should take notes. If you’re going to promote a coin by making absurd bets, at least have the proverbial balls to put something dear on the table.
While Musk’s tweet defies expectations of what a good wager is, Bukele’s post takes it one step further by defying human comprehension. Why does it ask whether he should quit his job at McDonald’s when his actual job is being the president of El Salvador? Is “Bitcoin Burger joint” a burger joint that accepts Bitcoin, or one that is Bitcoin-themed, or the brand name of a specific fast-food chain, or a combination of the above? It seems we will never know.
Decentralized finance (DeFi) — an industry that has lost a great deal of limelight since the crypto zeitgeist shifted towards NFTs — is making a return this week, albeit not for a good reason.
The pseudonymous 0xSifu, the chief financial officer of the DeFi project Wonderland has been revealed to be none other than Michael Patryn/Omar Dhanani, the co-founder of QuadrigaCX. Quadriga was a Canadian exchange that ceased operation under mysterious circumstances in 2019, losing $169 million of its customers’ funds in the process.
Explaining 0xSifu’s involvement in the project in a sincere and idealistic Twitter thread, Wonderland’s founder Daniele Sestagalli has expressed his belief in second chances and rehabilitative justice. Indubitably, the position of a CFO in an organization that handles dozens of millions of dollars worth of barely traceable digital assets makes the perfect sense for an alleged serial financial criminal looking to set himself straight.
In the meanwhile, Wonderland (TIME) is trading at $401.69 at the time of writing, down more than 95% from its all-time high.
What a week of CT drama. No wonder some just want to BUIDL.
Finally, as we are strapping in for another week of unpredictable price action, here is some useful social advice from one of the users of the /r/cryptocurrency subreddit, addressed to those who may have been unduly exposed to the market’s volatility risks.
This article contains links to third-party websites or other content for information purposes only (“Third-Party Sites”). The Third-Party Sites are not under the control of CoinMarketCap, and CoinMarketCap is not responsible for the content of any Third-Party Site, including without limitation any link contained in a Third-Party Site, or any changes or updates to a Third-Party Site. CoinMarketCap is providing these links to you only as a convenience, and the inclusion of any link does not imply endorsement, approval or recommendation by CoinMarketCap of the site or any association with its operators. This article is intended to be used and must be used for informational purposes only. It is important to do your own research and analysis before making any material decisions related to any of the products or services described. This article is not intended as, and shall not be construed as, financial advice. The views and opinions expressed in this article are the author’s [company’s] own and do not necessarily reflect those of CoinMarketCap.
9 people liked this article

Trading Analysis
Technical Analysis: LINK, HIVE, DOT, BAT, FLUX and APT Price Prediction (Jan. W4)
Bitcoin has broken out of the strong resistance at $21,800 and has hit the $23,000 mark. Let's see how the web 3 tokens are performing!
Bởi Ansh Rathod
5 minutes ago
3m"
Trading Analysis
Technical Analysis: MANA, SAND, RACA, STX and GALA Price Prediction (Jan. W4)
Metaverse and NFT coins have made some significant moves in the past week. Let’s have a look at how they are performing in the 4-hour charts.
Bởi Scarpa
33 minutes ago
2m"
Crypto News
Elon Musk is Now Called 'Mr. Tweet' on Twitter... and Can't Change it Back
The Tesla founder and Twitter owner's name change comes as the social media giant launches a major brand safety campaign for skittish advertisers.
Bởi Leo Jakobson
1 day ago
2m"
See all articles