How PayPal's Crypto Service Will Work
Tabla de contenidos
Which Virtual Currencies Is PayPal Going to Support?
What Crypto Services Will Be Offered, Exactly?
Is This Going to Be Available for Everyone?
What Infrastructure Is PayPal Using?
How Much Will PayPal Charge for Crypto Transactions?
What Funding Sources Will I Be Able to Use?
Why Has PayPal Done This Now?
What Are the Pros and Cons of Using PayPal to Buy and Sell Crypto?
How Did PayPal's Share Price React?
Crypto Basics

How PayPal's Crypto Service Will Work

PayPal recently announced their new crypto service, sending shockwaves through the markets — how will it work? 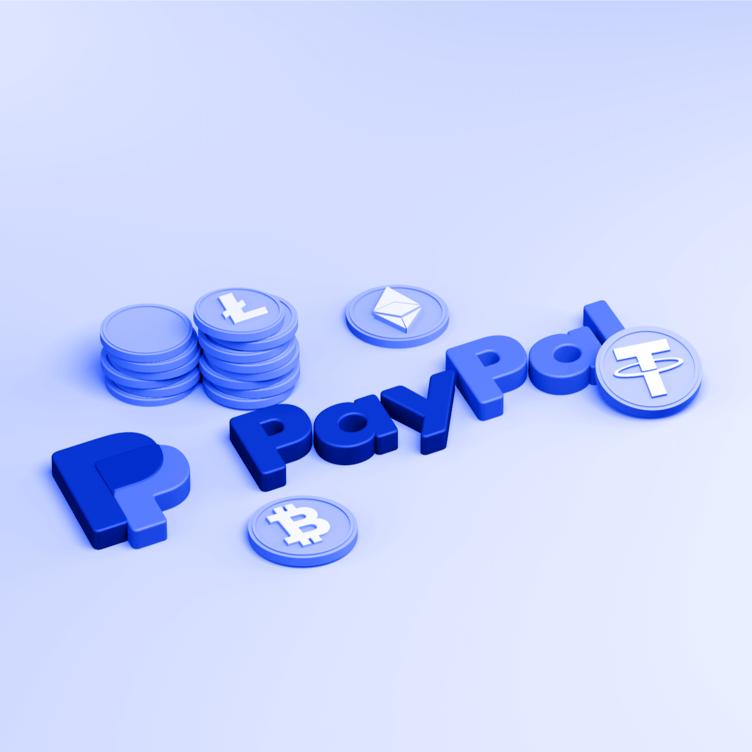 PayPal sent the crypto markets into a spin when it announced that it will allow its 346 million active users to buy and sell cryptocurrencies from their PayPal accounts last year.
Announcing the news, PayPal CEO Dan Schulman said: "The shift to digital forms of currencies is inevitable, bringing with it clear advantages in terms of financial inclusion and access; efficiency, speed and resilience of the payments system; and the ability for governments to disburse funds to citizens quickly."
It's a significant development in the mainstream adoption of cryptocurrencies — and it could create competition with the likes of Coinbase and Binance. That said, PayPal's global reach could help digital currencies gain a foothold in international markets among everyday consumers.
On Mar. 30, PayPal's Checkout With Crypto service finally launched, meaning that PayPal customers in the U.S. can use crypto as a checkout option alongside other payment options within PayPal.

Here, we're going to go through everything we know so far about PayPal's cryptocurrency service.

Which Virtual Currencies Is PayPal Going to Support?

Four cryptocurrencies will be available to buy and sell: Bitcoin, Ethereum, Bitcoin Cash and Litecoin. As you'd expect, all four of these digital assets posted outsized gains after PayPal's announcement was made. It’s important to note that the company used the word "initially" in their announcement — suggesting that we could see support for more digital currencies in the future.

What Crypto Services Will Be Offered, Exactly?

To begin with, account holders will be able to buy, hold and sell cryptocurrencies directly from their digital wallet. Whil they weren't initially able to use their BTC to buy things from merchants, that feature has come in the first half of 2021. Users will also be able to access a wealth of educational content "to help them understand the cryptocurrency ecosystem, the risks and opportunities related to investing in cryptocurrency, and information on blockchain technology."
We think this last feature is especially great — but then again, PayPal's users can just rely on CoinMarketCap Alexandria!

Is This Going to Be Available for Everyone?

Not initially. PayPal has rolled out its cryptocurrency service to U.S. users first, which is announced on Mar. 30. "Select international markets" — in addition to its Venmo platform — will follow soon afterward. Whether you'll be able to use PayPal to buy and sell digital currencies will probably depend on your country's legal stance on crypto. We'll hopefully get more details about everything soon, but the company has vowed "to work hand-in-hand with regulators, governments and central banks."

What Infrastructure Is PayPal Using?

PayPal says it has entered into a partnership with the Paxos Trust Company, which is already an established provider of cryptocurrency services. Reports have also suggested that the company is in talks to buy BitGo, which helps BTC users keep their cryptocurrency balances secure. From a regulatory standpoint, it's also received a "first of its kind" conditional BitLicense from the New York State Department of Financial Services (NYDFS).

How Much Will PayPal Charge for Crypto Transactions?

To begin with, PayPal says it isn't planning to impose transaction fees whenever crypto is bought and sold on its platform. However, charges are expected to be introduced next year. Right now, we don't know how much these fees will be — and how they compare with cryptocurrency exchanges.

What Funding Sources Will I Be Able to Use?

No mention of that was made in PayPal's announcement, but it's likely that users will be able to purchase crypto using funds from their bank accounts, debit cards and credit cards.

Why Has PayPal Done This Now?

It is worth noting that PayPal, and Dan Schulman, haven't always been enthusiastic about cryptocurrencies — arguing that few merchants are willing to accept digital payments, and Bitcoin's volatility means it's unsuitable to be used as money. However, the company says that the COVID pandemic has changed the way we complete transactions...and cash payments using fiat currency are on the decline.

What Are the Pros and Cons of Using PayPal to Buy and Sell Crypto?

When compared with exchanges, crypto enthusiasts might be drawn to PayPal because of the rigorous security measures and compliance controls it offers — especially considering that some trading platforms have suffered hacks and security breaches. PayPal's user interface will also probably be a big draw for users, as it might be simpler to complete transactions than on rival trading platforms.
There are downsides. Unlike Binance or Coinbase, you won't be able to deposit crypto into your account — or withdraw it to another wallet. This means PayPal's cryptocurrency service is also less flexible than those offered by mainstream rivals such as Square's Cash app.

PYPL actually hit record highs following the announcement in 2020. It's interesting to see PayPal managing to push through with a cryptocurrency service while Facebook's Libra stablecoin project stalls.
Somewhat ironically, PayPal co-founder Luke Nosek said in 2019 that the firm had originally wanted to create a digital currency, as opposed to the PayPal you see today, but it wasn’t possible at the time due to institutional pressure. The question now is whether PayPal plans to launch its own cryptocurrency in the future.
5 people liked this article

Crypto Basics
What Is an ICO?
ICOs were all the rage back in 2017 — what do you need to know about this method of fundraising, and how can you protect yourself against bad actors?
Por {{autor}}
1 year ago
5m
Crypto Basics
Top Ethereum Killers - A Detailed Comparison
In the race to being an actual Ethereum killer, which project will reach the finish line first? Let's find out!
Por {{autor}}
2 months ago
6m
Crypto Basics
Connect MetaMask to Binance Smart Chain (BSC)
Here is a step-by-step guide by CoinMarketCap Alexandria on how to connect MetaMask to Binance Smart Chain (BSC). Read more!
Por {{autor}}
5 months ago
4m
See all articles