Why Are We in a Bear Market? When Will It End?
Table of Contents
How Did We Get Into This Bear Market?
A Comparison With Previous Crypto Bear Markets
What Does the Future Hold for Macro?
When Could the Money Printer Go Back on (and What Could Delay It)?
Conclusion
Crypto Basics

Why Are We in a Bear Market? When Will It End?

Where are we in this bear market? Is it different from the previous ones? What can put an end to it? Let us help you find the answers to these tough questions! 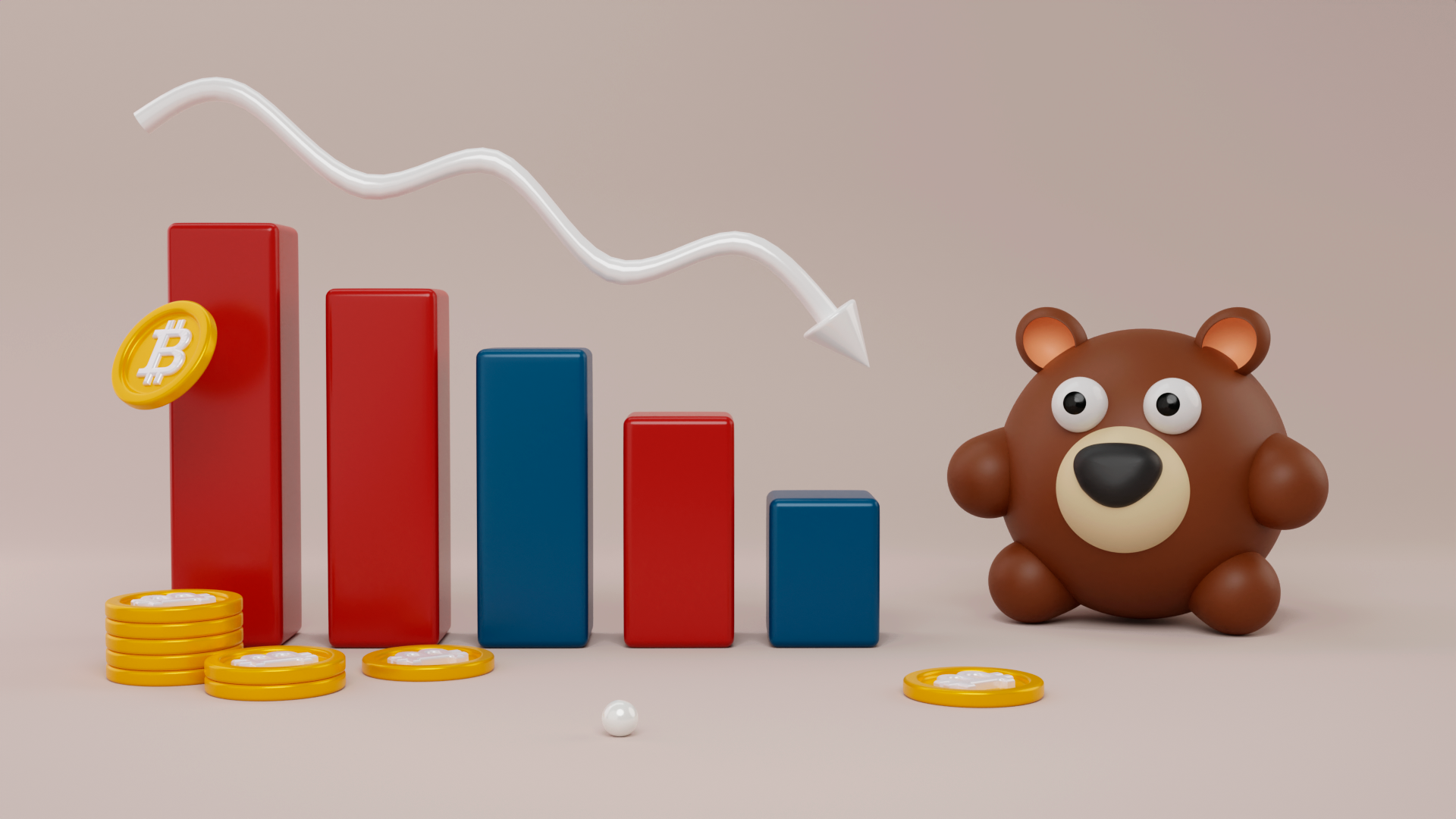 Don't let our recent July 2022 update lead you astray. We are still very much in a bear market.

This bera party is just getting started!

This piece will give you a comprehensive overview of how we got into this mess, and when we'll get out of it. We will cover:

How Did We Get Into This Bear Market?

We have covered the individual reasons in different articles previously. However, the highly abbreviated TLDR version is this:
1. Inflation ran hot and got out of control, causing "the macro" to go to s**t.
2. As a result, BTC started sliding and, through a combination of factors, the ex-stablecoin UST collapsed, taking LUNA down with it.
3. This caused a bunch of players with big exposures to get liquidated or at least find themselves in serious financial distress: Celsius, the crypto venture capital fund, Three Arrows Capital, and the CeFi lender, Voyager (to name the biggest).

Of course, it was a bit more complicated than that. If you want the full story, we covered it across different articles:

Of course, there were other factors like the GBTC discount disappearing and seemingly risk-neutral futures trades going wrong. But the big picture is inflation → everyone starts dumping their risky bags → contagion in the crypto industry.

Crypto has survived its fair share of bear markets. That explains the industry’s overall positive sentiment, since “crypto always bounces back.” Here’s a look back at the historical crypto bear markets, courtesy of Messari’s research:
As you can see, the catalysts for bear markets were different but shifted slightly from hacks (though we had hacks in 2021, too) to macro and industry contagion from falling crypto hedge funds.
While there is still a case for a short-term crypto bull rally this summer, it is worth looking at indicators to understand where we are in this bear market and how long it will last.
One indicator is price-based vs time-based capitulation. Price-based capitulation is when investors who were too bullish get shaken out and liquidated — this happened to the funds and lenders mentioned above. The consensus view is that price-based liquidation is largely over.

Time-based capitulation is when the average cost basis for acquired coins first dips below the unrealized profit threshold, only to rise above it again. That's the market trying to "find a bottom." For now, we are below this threshold, but haven't been so for a long time:

The current average of 244 days below the threshold would indicate a potential end of time-based capitulation in February 2023. But past performance is not necessarily an indicator of future performance.
Another factor is the Puell Multiple, which is the dollar value of Bitcoin inflation compared to its 365-day moving average.

Ok, let's do that slowly again:

Say the current Bitcoin issuance (=inflation) rate is 6.25BTC times $20K, i.e., $125K dollar per mined block. If the average price over the last 365 days was higher, Bitcoin was probably in a bull market and is cheap now. If the price was lower over the last 365 days, Bitcoin was probably in a bear market and is expensive now.
Exactly how cheap or expensive depends on the difference: the Puell Multiple. In other words, it measures how profitable mining is.

Currently, the Puell Multiple is signaling a potential bottom:

A similar indicator is the Mayer Multiple, comparing the current price to its 200-day moving average. It is at its second-lowest deviation ever:

Interestingly, the confidence of long-term holders also indicates a value price for BTC:

Furthermore, you can check our comparison of the 2018 and 2022 bear market drawdowns.
But while the on-chain data looks okay-ish, we saw that the 2018 and the 2022 bear markets are macro's fault. So we need to look for indicators that macro's improving.
In short: it's complicated.
Messari is on team transitory inflation (sort of) and thinks we will find a bottom at 3-4% soon. However, some analysts think the Fed's hand will be forced by consistently high inflation due to structurally changing supply chains. Some fear rates going as high as 5-6%.
The only thing that's (sort of) clear is that Bitcoin is less an inflation hedge and more a hedge against an expanding monetary base:
In other words, don't expect a bull run as long as the money printer is off:
TLDR:

What Does the Future Hold for Macro?

Since the macro environment is that important, it warrants an extra section. Yes, yes, we know.

In short: it's a bumpy road ahead.
The U.S. economy contracted by 0.9% in Q2 2022, although officials were scrambling to move the goal posts on whether we are in a recession now (if not now, we'll be there very soon). Cyclical trends that determine a recession are:
All of them are sliding, but not negative yet. Unfortunately, the negative trend will not be reversed in an environment as negative as the one now. Just look at consumer confidence in the biggest economies in the world:
This is not what you want to see when GDP growth is negative. And by the way, GDP growth in the U.S. has been in structural decline over the last years, well below the long-term average of 3%:
But if the US economy is looking subdued, the outlook for Europe is downright grim:

Things for Europe are looking worse since Russia is dangling the Sword of Damocles above the European gas supply for winter.

No matter how hard policymakers and communication directors weasel around, math is a language that does not tolerate ambiguity. And the proof is in the pudding, or rather in the forward-looking data like the global manufacturing PMI (basically an activity level measure of manufacturers):

If (or rather when) the recession hits, it will show up in reduced earnings for U.S. corporations. This would trigger another leg down in equities. The cause and effect go something like this:

The final pivot part is key and the hope of all crypto (and equity) bulls. The market is betting on the Fed eventually reversing course and printing again, sooner rather than later.

So why the pivot?

Put simply, the political and economic incentives for printing far outweigh those for saving.

When Could the Money Printer Go Back on (and What Could Delay It)?

The simplified version of this difficult topic is that markets are convinced that the printer will come on some time in 2023:

In essence, it is almost forcing the Fed's hand. However, a couple of bearish factors could instead force the Fed to stray from its course and delay a resumption of crypto going up.

Some potential bearish banana skins we know about (let's call them the known unknowns) are:

But that does not even account for potential curveballs we don't really think about. Let's call them unknown unknowns:

Bears are firmly in control of this market and are likely to remain so for at least going into 2023 — potentially even longer. Michael Burry of "Big Short" fame thinks we have another leg down coming before the bottom is in. However, the silver lining is that the printer will come on at some point after that.

Stack your cash and be ready to buy when it's time.

Crypto Basics
An Overview of Nigeria’s eNaira CBDC
Considering the size of Nigeria’s economy and population, this adoption is a significant milestone in the evolution of CBDCs.
By Werner Vermaak
1mo ago
6m
Crypto Basics
What Is Tokenomics?
Tokenomics is the topic of understanding the supply and demand characteristics of cryptocurrencies.
By Stuart Langridge
2yr ago
5m
Crypto Basics
Staking and Savings on KuCoin - Everything You Need to Know
From staking to lending, this guide covers all the popular staking and saving opportunities offered by the exchange.
By Will Kendall
3mo ago
11m
See all articles