Arsenal Contest — Gaming is for all

Arsenal Contest — Gaming is for all 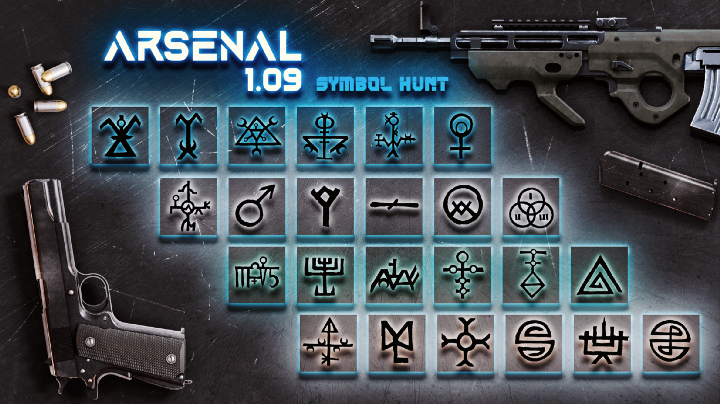 Fabwelt Studios is approaching its first anniversary, Arsenal is proving to be a prominent game on the blockchain, Fanwelt is gearing up for the Football Worldcup and a new concept of games will be announced to the public soon. The Fabwelt team is focused as before on delivering its core idea to the wonderful community, as we call them “WELTIES”. We are very ecstatic to announce this upcoming contest.

It’s a mega event celebrating the launch of Arsenal 1.09 and the upcoming mobile version!

2. RULES
In every Arsenal map (except for the training room), these symbols are hidden in a very mysterious way. A gamer has to find them using all the resources of the game.
№1 A gamer has to tweet the symbol found during the contest with a real-time in-game screenshot covering the whole game screen. The tweet must be from a personal account or a company account and must tag at least one favorite influencer and 2 friends on Twitter, tag @fabwelttoken, and end the tweet with #WELTSYMBOL.
№2 The first gamer to tweet a symbol that is not found before will be considered for individual symbols prizes (Check PRIZE №1). Gamers that will find a symbol already found before must follow rule number 1 in order to compete for the big 100k USD prize!
№3 This contest continues until all 24 symbols are found. You can check the Arsenal Website to find out which symbols are already found. Follow all our channels in order to receive exclusive hints to find those symbols!
№4 To be eligible for individual prizes and the grand prize, hold at least 1000 WELT before the contest ends. The contest will end when the last symbol is found.

3. PRIZE
№1 Each symbol found for the first time will top up the prize per symbol. Starting at 2.5k WELT for the first symbol, the prize per newly found symbol will top up with 1000 WELT. So newly found symbol number 2 will be a prize of 3.5K WELT, number 3 = 4.5K WELT, and so on.
№2 Everyone who finds a symbol and does so according to the rules stated in RULES section no.1 to no. 4 will participate for winning the grand prize of 100K USD. When all 24 symbols are found, one winner will be randomly selected out of those who participated according to the rules.

GOOD LUCK TO ALL!

Arsenal is a 3D First Person Shooter multiplayer game for the Fabwelt Gaming Ecosystem and Metaverse. It utilizes in-game NFTs as assets, collectibles, and utilities. In-game assets are all blockchain collectibles that users utilize in playing the game. As blockchain-based items, in-game assets can be freely withdrawn from the game for other uses such as collateral on decentralized lending protocol, staking, gifting, or passing it down as an inheritance. In-game assets can be seen as a commodity.

It has a “battleground” look and feels and it’s fully integrated with blockchain technology. Pay to Play and Play to Earn are integrated in such a way, that it attracts everyday players as well as professional players around the world, to get incentives and fun. Many different types of maps are included like big maps for sniping, and small maps for fast close combat.

Learn more about Arsenal in our tutorial on gitbook: https://fabwelt.gitbook.io/fabwelt-gitbook/fabwelt-games/arsenal-tutorial

Fabwelt is a ground-breaking concept that integrates blockchain technology into the heart of high-quality games of all types and genres. With in-game NFTs, Play to Earn, and Defi, we create a high-end gaming ecosystem and enhance the fun. A multi-genre gaming ecosystem that includes genres such as 3D First Person Shooter, Action-Adventure, Simulation, Strategy, Fantasy, and many others. In-game NFTs as assets, collectibles, and strategic utilities resurrect the fun of Blockchain gaming.

We incorporate all of our games into a never-before-seen digital reality. This is referred to as the Gamingverse. We provide the technology to have never-ending fun with features like Universal NFTs, digital cross-game identification, and multi-tiered tournaments, which are powered by gamers.