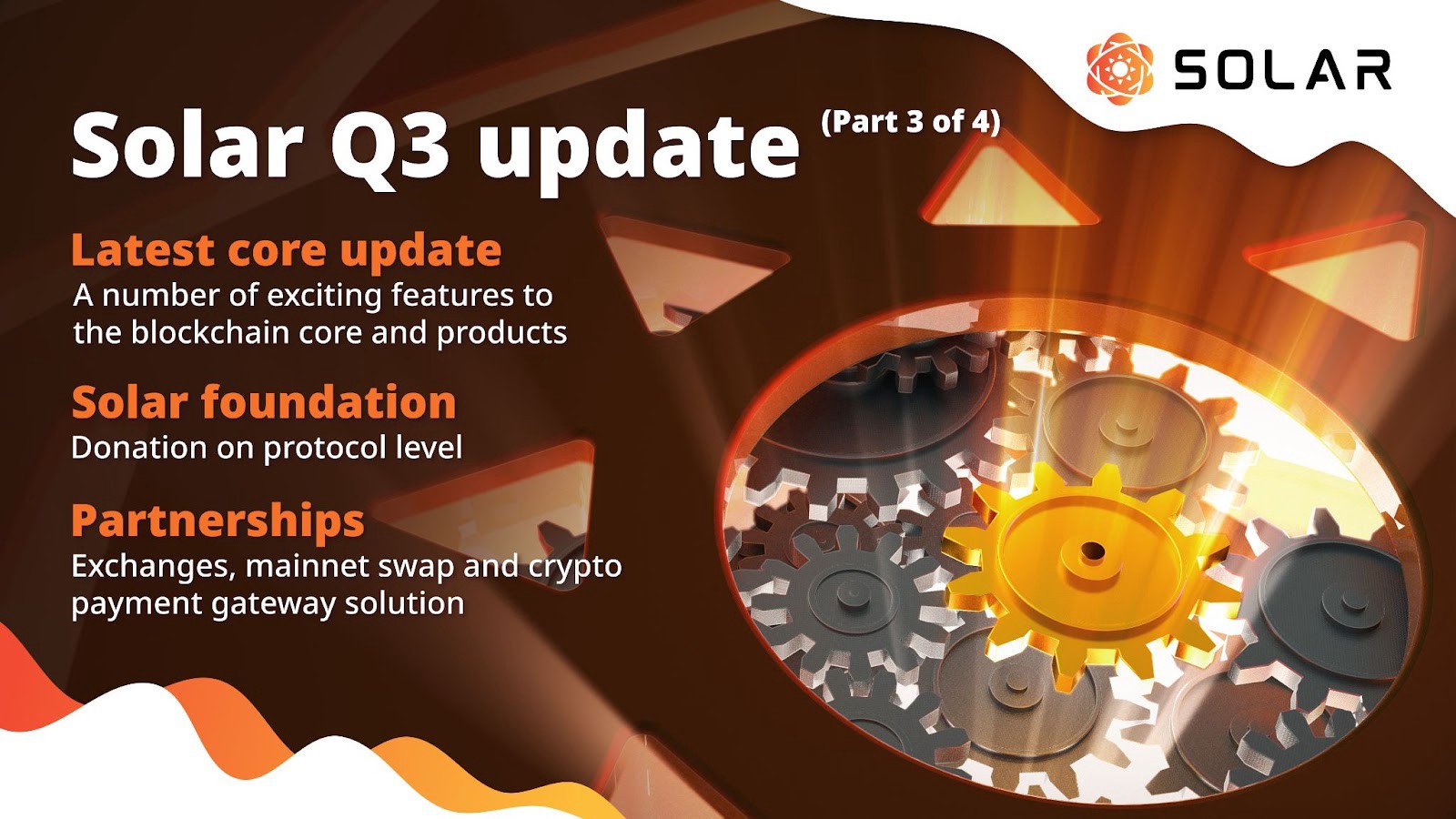 Welcome to the 3rd part of the Solar Q3 Update.

In this part of the Q3 update we will be mentioning the following items:

The new 4.1 release of Solar Core has added a number of exciting features to our blockchain core and products.As of blockheight 1812866, 5% of block rewards are now automatically allocated to the foundation fund to ensure a healthy and capable funding source for the foundation and all its activities.But there are more exciting additions, of which we would like to mention several here.

A new websocket API has been created which allows users to access features of our blockchain easily and subscribe to events on the blockchain, such as incoming transactions, delegate changes and more.A new productivity statistic has been created which now accurately calculates and reports the productivity of all delegates over a running 30-day cycle on protocol level.BLS12–381 support has been implemented as a possible future algorithm for generating such key pairs, as well as signing and verifying messages and aggregating public keys and signatures.

As always our Solar Core update also includes many maintenance updates, security improvements and smaller changes.While these might not always be visible to our end-users directly, they often have a large impact.

As you might recall from our Q2 update, there has been a significant change in how voting is handled on a protocol level.In case you are not familiar with this change, here is a short summary that we mentioned in that update.In earlier versions, one address could vote for one delegate.In this new version of Solar Core, we have created a new vote transaction that will allow you to assign a percentage of one balance to multiple delegates. This means you can now vote for multiple delegates from one address and you no longer need to split your balance across multiple wallets to do so (you still can, if you want to).The old legacy vote transaction will now show as a vote transaction with full weight assigned to one delegate.

With the most recent release of our Solar Desktop Wallet, you can now use this new vote transaction easily from within your wallet and allocate your balance from one address to up to 53 delegates.By selecting the delegates you want to vote for, and assigning a percentage of your address balance, you can now assign your balance to multiple delegates, removing the need to manage multiple addresses to spread out your votes.

Since the beginning of this year, events, integrations, salaries and other expenses were privately funded by certain individuals.The Solar Blockchain Foundation is a non-profit foundation and a project that started without an ICO or investors in the entity.

To maintain a stable source of income, a proposal was presented to the delegates. The majority of the delegates have agreed to move 5% from the already existing block rewards and send this on protocol level to the Solar Blockchain Foundation wallet.

The protocol went live on the 12th of September.The wallet address of the Solar Blockchain Foundation is:

In the next blog article we will introduce you to how these funds are being used by the foundation.

Mainnet Swaps and Integration with Exchanges

While we cannot update you on specific exchanges or dates due to NDAs, we can inform you that exchanges both large and smaller are working on the mainnet swap and integration.Below you will find a list of exchanges that currently offer Solar (SXP) mainnet services with some introductory information about them.

Bitget is a top 70 ranked exchange on CMC and supports the Solar (SXP) mainnet. Bitget is also a sponsor of the world leading football teams Juventus and Galatasaray.This exchange allows for spot and futures trading of SXP — USDT.You can read more about the integration below. https://bitget.zendesk.com/hc/en-us/articles/7038251849369.Bitget’s total volume of the last 24 hours was $430 million.

Bitmart is a top 30 ranked exchange on CMC and it completed the transition to Solar (SXP) mainnet on July 26th.Bitmart allows for SXP — USDT trading. They no longer support old ERC20/BEP20 tokens and have directed users to the Solar Mainnet Swap tool, which can be found here: https://solar.org/swap-details.Check out their official statement: https://support.bitmart.com/hc/en-us/articles/7599078000283.Bitmart’s total volume of the last 24 hours was $1.8 billion.

Upbit is the most popular stock exchange in the far east and provides services to Solar’s Korean users.Ranked in the top 35 on CMC, they support both USD and KRW pairs for trading SXP. Upbit’s total volume of the last 24 hours was $1.3 billion.

The Solar Network ecosystem on exchanges has expanded to include more options for buying, selling and transferring SXP.Xeggex will list the projects that will be released to the Solar network in the future for free.This will increase the use of our incentive network.Xeggex has several markets available for SXP, including BTC, DKD, USDT and USDC. XeggeX also allows you to vote for delegates on the Solar Network. This can be directly from your profile menu on the website and also by using the XeggeX mobile app.More information about the XeggeX Mobile Wallet:https://play.google.com/store/apps/details?id=com.xeggex.walletXeggex’s total volume of the last 24 hours was $27 thousand.

Gate.io is one of the largest exchanges in the industry and ranked in the top 10 on CMC. Gate.io was one of the first exchanges to support the Solar (SXP) mainnet and allows trading SXP on several markets, including ETH, USD and USDT.You can read more in their statement here: https://www.gate.io/tr/article/26454?ch=en_sm_0522.Gate.io total volume of the last 24 hours was $1.9 billion.

Lbank exchange is ranked as one of the top 15 exchanges on CMC and they announced that they will support the Solar (SXP) mainnet.LBank suspended the deposit and withdrawal of the old ERC20/BEP20 tokens and will exchange those tokens according to a 1:1 ratio (old to mainnet).Check out their official statement here: ​https://support.lbank.site/hc/en-gb/articles/10070704315033.LBank’s total volume of the last 24 hours was $1 billion.

Hotbit announced that they have swapped the old tokens to mainnet and have successfully integrated mainnet on their exchange.More information to be announced soon.

Most SXP holders are aware that we are actively communicating with many other exchanges to migrate from ERC20/BEP20 to mainnet SXP.

It is not a surprise to know that we are also frustrated about the fact that we are not allowed to share any information regarding the progress on the mainnet migration with exchanges..

We can at least say that there are no exchanges that have denied the mainnet migration.

The delay is mostly caused by actions from the team that were in charge of the tokenomics of Swipe (SXP).While there have been concerns regarding the initial supply of SXP on ERC20/BEP20, it has been acknowledged that this is not an issue that needs to be resolved by the community or the current project leaders running the mainnet SXP and we’ve only been told to help and reduce the supply to 300M as much as we can.

The mainnet blockchain of SXP is already burning 90% of all transaction fees on protocol and we are happy to see that several projects are introducing events that burn SXP on the mainnet SXP blockchain.

Our second milestone is to speed-up mainnet traction and have more individual SXP holders to migrate from the old network to mainnet.We have not been given any exact numbers regarding the goal of mainnet adoption.But we can confirm that these numbers are being monitored by exchanges that are currently trading on the old network.

We are glad that communities and several exchanges already supporting the mainnet have jumped in to help us with these final milestones.

Dokdo will work with Adshares to display decentralised ads in the District 53 metaverse.Adshares is a decentralised, peer-to-peer marketplace which establishes itself as an essential participant in the blockchain advertising industry. It is built on the ESC or Enterprise Service Chain blockchain which powers the network of Adshares.

The revenue from ads placed in the District 53 main square will be converted to SXP and burned on the SXP blockchain.

SXP mainnet is now available for instant swaps at ChangeNOW.

ChangeNOW is a non-custodial instant crypto-to-crypto and fiat-to-crypto exchange where one can trade more than 200 coins conveniently, and registration-free.

We are excited to announce that NOWPayments, a non-custodial crypto payment gateway solution that allows everyone to accept crypto payments on their websites, online stores, and social media accounts, is integrated with SXP mainnet!

NOWPayments was founded by the team behind ChangeNOW, a cryptocurrency exchange service with a mission to provide a crypto payment gateway that is easy to use and embedded into existing websites.

NOWPayments has a number of widgets available that make it easy for users to accept cryptocurrency for donations and fundraisers.

Solar has partnered with NOWPayments to develop a custom payment gateway for Snipcart.

In the following days, we will release the open source payment gateway that can be easily accessed by anyone looking to implement SXP in their webshop.

This is a major step forward in making working with crypto easier and more mainstream.The benefits of partnering with ChangeNOW will be shared further with the community through an AMA.More details will be announced soon.In the meantime, check out how to swap SXP on ChangeNOW! https://changenow.io/currencies/solar-network.

The Solar Blockchain Foundation has been in close contact with several exchanges that are looking to work together and speed-up mainnet adoption.

In the following weeks, the old SXP network will be listed on these exchanges.

SXP holders will be able to send their old BEP20 and ERC20 tokens to these exchanges and withdraw the mainnet SXP coins.The exchanges supporting this program will automatically convert the old tokens to mainnet coins on the backend.This means when you deposit SXP tokens from the old network, you won’t be able to withdraw the old tokens again. Details to be announced.

The Ledger App for the Solar Network has been successfully completed on the 9th of July 2022.

The source of the Ledger App for the Solar Network can be seen here:https://github.com/Solar-network/ledger-app-solar

The app has been submitted for review and we are currently waiting for more information from the Ledger team.

Thank you for reading!

The final Q3 update will be released on Friday the 7th of October which will cover updates on the following items: