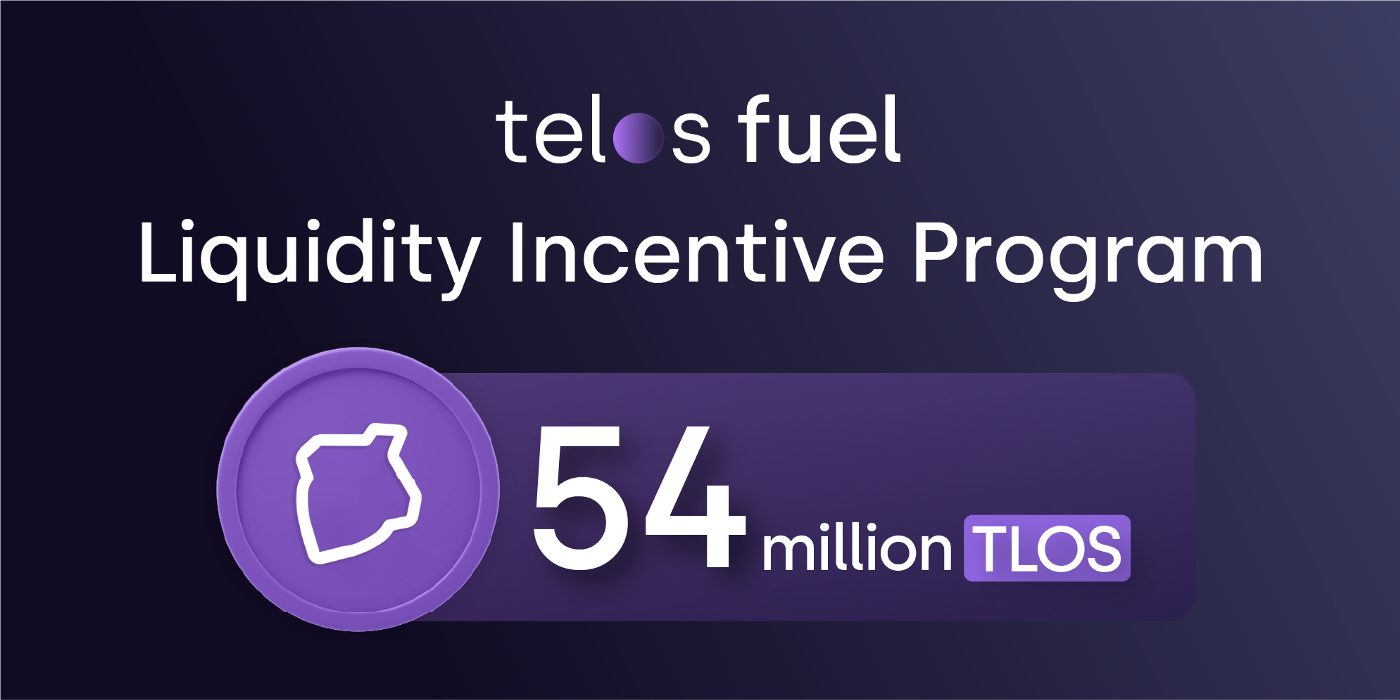 The Telos Fuel Liquidity Incentive Program (TFLIP) program’s main goal is to create a competitive decentralized finance (DeFi) ecosystem within tEVM and Telos Native. As part of the program, the team’s responsibility is to analyze, allocate and manage Liquidity & Incentives to create a healthy DeFi ecosystem by increasing the current Total Locked Value (TVL) on the chain through different mechanisms. There is a direct correlation between TVL and the overall value of an ecosystem in the industry; thus, increasing TVL means growing TLOS appeal with deeper liquidity to the wider ecosystem.

The primary objective of the Telos Fuel program is to grow the TVL on Telos and create healthy DeFi markets. Today, it’s a fact that nearly all robust DeFi ecosystems on other chains have significant liquidity incentive programs which attract capital, lenders, and traders. Although tEVM has kickstarted some quality DeFi applications, there are not enough incentives for liquidity to flow into the network from outside the current ecosystem.

An active DeFi ecosystem is a fundamental component of any L1 blockchain that intends to grow and attract new users and capital to its ecosystem. We need to make DeFi Composability a reality on Telos. DeFi composability means an interconnected DeFi ecosystem comprising different types of protocols building on top of each other, working together to offer efficient liquidity solutions etc.

DeFi Composability is vital to ensure high capital utilization, make capital sticky, attract new users and provide new opportunities for developers to build and grow. Currently, the Telos DeFi ecosystem is very young and comprises only a few protocols with basic use cases. As a result, it’s not as attractive to users and developers in comparison to other L1 & L2 networks. Though Telos offers one of the best technologies in the industry and addresses one of the biggest problems in DeFi with MEV, we would still need to attract and support many more DeFi protocols to achieve sustainable DeFi Composability.

TVL and Liquidity will play an important role in allowing us to reach a critical mass where the ecosystem can grow on its own in an autonomous way. Based on the analysis of different chains and protocols, it is imperative that for a DeFi ecosystem to kickstart, significant liquidity incentives and grant programs have proven to be successful.

Telos Fuel is the outcome of analyzing different initiatives on other networks and identifying what works for us. We set an objective to build and attract a long-term, secure, sustainable DeFi ecosystem.

We recognize that financial incentives are a critical component but need to be supported by a specialized team understanding the dynamics and rules of DeFi. Therefore the organizational changes outlined will further ensure the success of the FUEL program.

The Telos Boost initiative will further the growth of the dApp ecosystem on Telos Native and EVM. The primary objective of this initiative is to dramatically increase the number of applications built on top of the Telos network developed by reputable teams that have a clear vision, traction and sound tokenomics.

This initiative will also help projects that meet the eligibility criteria with introductions to exchanges and partners. in addition to bootstrap liquidity. When a project meets the eligibility criteria, the Liquidity team will match up to 50–100k USD of TLOS liquidity. The TLOS tokens will be offered as a 0% loan with certain terms and conditions, ensuring security of the funds.

The Telos Yield initiative aims to grow the overall liquidity of TLOS tokens and the TVL across our entire ecosystem to make DeFi Composability a reality on Telos. It supports specific liquidity mining (LM) and protocol development efforts and will reward projects based on on-chain metrics. The key measure, although not the sole one, is the total value locked (TVL) on the respective protocol as calculated based on a time-weighted average price (TWAP). Other projects which satisfy criteria with DAU and strategic importance will be evaluated and incentivised on a case-by-case basis by the L&E and TF teams. The final list of parameters to determine how projects qualify for LM incentives will be published officially at a later date.

The phased approach of the initiative ensures that we take appropriate actions that are suitable at that time and also helps us evaluate the outcomes regularly, the steps of which are as follows:

More information on other phases will be announced over the next couple of months.

Telos Staking Rewards will expand beyond the standard Telos Resource Exchange (REX) and ensure incentives are aligned with the ecosystem’s growth. Telos Resource Exchange has been immensely successful since the inception of Telos Mainnet, locking more than 60% of circulating TLOS at any given time. The new Staking Rewards initiative will incentivize users across the Telos ecosystem on Telos Native, tEVM and CeFi platforms to grow the ecosystem. This will also increase the minimum staking period to 10 days on both tNative and tEVM.

To support this initiative, 1.7m TLOS tokens will be allocated every month to incentivize users who are staking on Telos Native and tEVM. Users on different CeFi platforms can also participate in the Staking programs as more of them add support to on-chain staking contracts and redistribute the rewards to the users.

More information on Telos Staking Rewards will be published in the upcoming days.

This team was initially formed by volunteers during Q1’2021 to help Telos Foundation with exchanges and liquidity management as they were severely understaffed at that time. The original mandate for the team was to be the multisig signers of funds and coordinate with TF to make decisions in regards to liquidity management etc. Since its inception, and with the support from Telos validators last year, the team’s responsibilities have evolved from simply managing funds and signing multisig to making decisions on where and how liquidity should be grown and distributed. The team currently manages around $5m worth of funds in TLOS and other crypto assets across multiple chains, mainly allocating these funds for liquidity on DeFi, CEX and Bridges.

‍In light of these added duties and the launch of the Telos Fuel program, we have started the work to optimize workflows, expand the current team, and establish a transparent structure and decision-making process over the last couple of months. The current team consists of Sukesh Tedla (Active), Rory Mapstone (Passive), and Kevin Quaintance (Passive), in addition to the employees of TF. We are working on expanding the team further by adding new members from our ecosystem with interest and experience in DeFi. Furthermore, we to establish an advisory working group made up of representatives from DeFi platforms to ensure a constant feedback loop.

The team works under the TF legal entity and is tasked to help grow the Telos ecosystem by provisioning liquidity and incentives and facilitating deal flow with applications & partners etc.

The Telos EVM is the most powerful and scalable Ethereum Smart Contract platform built to power Web 3.0. Telos features a robust, third-generation, ESG-compliant evolutionary blockchain governance system, including smart contracts, advanced voting features, and flexible and user-friendly fee models. In addition, Telos supports the blockchain ecosystem by serving as an incubator and accelerator for decentralized applications through development grants. Come build with us.

GAMI Move: Current ROI 47% at the end of the second week!

Investing is a great next step for those wanting to build up their finances, towards long-term financial freedom.

Through an ecosystem of Experts, Brickken aims to cover all necessary variations in the expertise needed for a Company to comfortably issue its own Security Tokens.

Why Is Minto Feeling Good When Mining Tokens Are Dead?

Mining tokens are digital assets backed by mining power that guarantee their owner daily mining income. Why Is Minto Feeling Good When Mining Tokens Are Dead?

MONSTA is a Hyper-Deflationary and Dividend-Yielding asset on BNB Chain that introduces a new form of monetary policy.