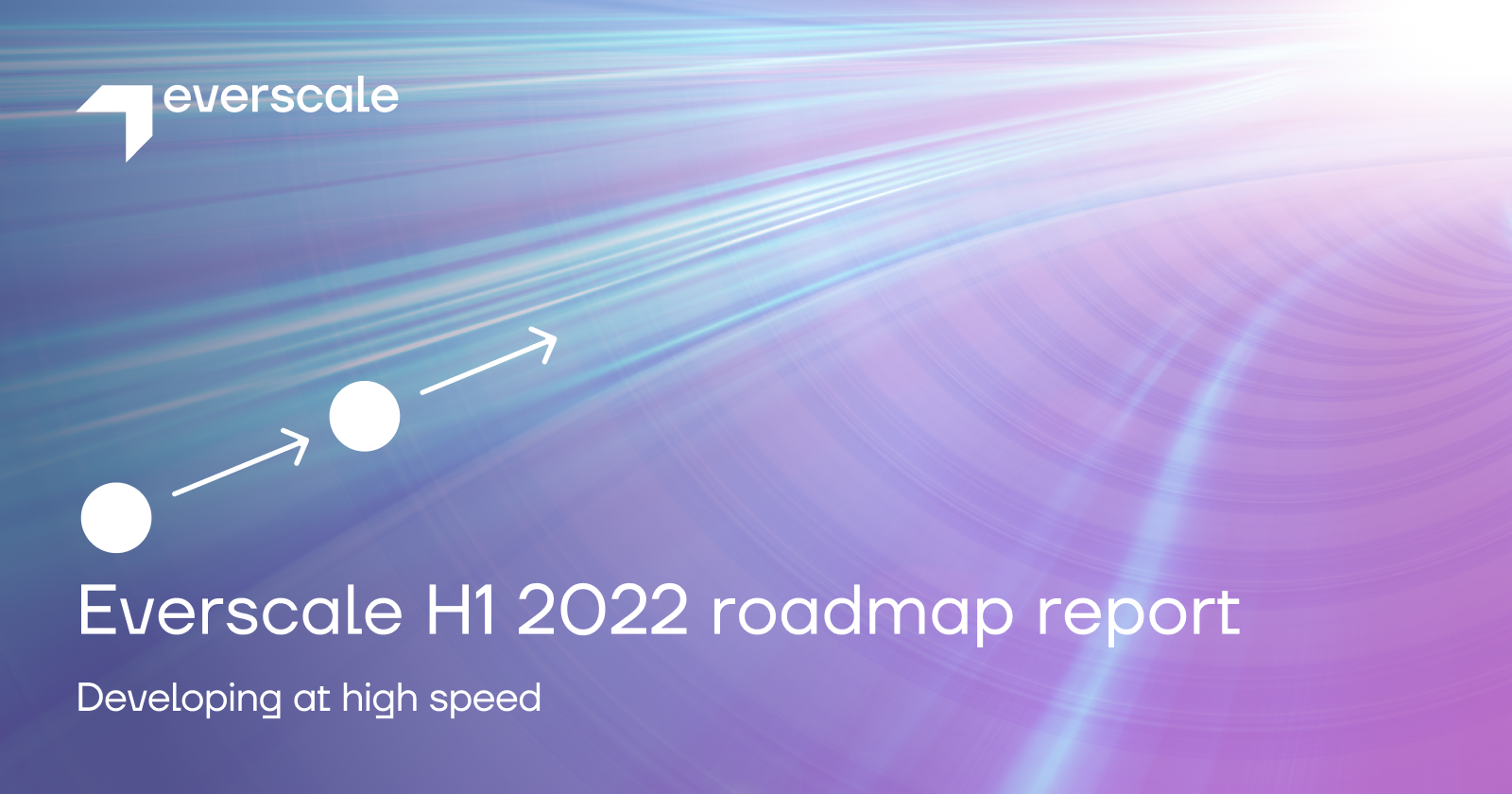 As it’s the end of Q2, it’s time to talk about results. A lot of promises were made, and a lot of things were delivered too. What’s more, we ended up with a few extras on top of what was planned, such as new exchange listings. So, it’s time to recap all the work that took place in the ecosystem and determine our onward scope. Let’s go!

It’s safe to say that our fees decreased significantly due to optimizations of the node software. The current fee is 0.014 EVER, which is currently equivalent to around $0.0014. Can anybody find a network with cheaper transactions, please?
All the necessary documentation was written, and we’re continuing to update it. Our docs database https://docs.everscale.network is the first port of call for anybody who wants to start building on Everscale. There are docs for validators, developers, NFT creators, and regular users.
Unfortunately, due to some regulatory issues, we had to cancel the launch of zk-SNARKs technology on Everscale. We’re aiming to be in the big league, and it’s widely known that regulators don’t like any kind of privacy features in blockchain networks. Hence, we don’t want to cause any worries for exchanges by having zk-SNARKs functionality, and we decided to postpone it until more favourable times.
The lending and borrowing protocol is also ready. Everlend.app is a platform where anyone can lend or borrow WEVER and USDT and make some money from doing so. Currently, it’s in the process of being updated to v2.0, which will greatly increase its security.
A TIP-3 stablecoin can now be found on FlatQube: EUPi, a euro-pegged stablecoin, whose current market cap is 100 million. It’s fully compatible with the TIP-3.1 standard and can be stored on any Everscale wallet.
The Cardano DEX is up and running – that’s DEXADA. It’s one of the very few options for transferring liquidity from Cardano to other blockchains, and Everscale will benefit greatly from having a product like this.
NFT SDK Tools are ready and can already be used by Everscale developers. The SDK can be found here along with examples of its usage. Everscale has one of the most advanced NFT standards in the industry, and the SDK expands it further by adding more methods that cover all possible use cases for NFTs.

That’s all for the first quarter. The second one was probably the most ambitious, as we put out a lot of products and reached a lot of milestones. We’re proud to say that we have completed almost all of them.

One of the most important milestones here is migration to the new Soft Majority Fault Tolerance (SMFT) consensus, which will happen over the course of several months. It’s worth noting that many of the parts of infrastructure are interconnected: the SMFT consensus, the Reliable External Messaging Protocol (REMP), the D’Elector smart contract, and dynamic gas fees. We therefore had to ensure that all parts of the new Everscale core would be in line with each other before launching the update. All the code for SFMT is ready, and all that’s left to do is to deploy it along with REMP, which will increase the security of the network and change the way the messages on Everscale are processed. We posted some materials on REMP earlier.

The SMFT protocol and secutity

Everscale's REMP – what is it?

However, the TIP-4 standard, or TrueNFT, was successfully implemented. You can already find it on GrandBazar. It will also be supported by EVER Surf and Everspace. We hope to see more artists coming to Everscale to create amazing artwork on our NFT platforms in the future. But that’s not all that our standard is capable of, and that brings us to the next point.

Everscale TIP-4 or TrueNFT
Evercraft, the first demo of the future GameFi SDK, is also ready. Land tokenization, resource management – this will all be available for game developers. Everscale is capable of handling thousands of players simultaneously, which makes it an ideal candidate for hosting GameFi dApps and metaverses. An MMORPG would also be possible on the blockchain, so we’ll be working on bringing more game devs to Everscale.
We need to spread awareness about Everscale among developers. That’s why we thought: “A decentralized GitHub on Everscale technologies? Why not.” The EverX team thus developed GOSH, a decentralized Git, fully recognized by big players. They have already partnered with and are supported by Docker, whose products are used by millions of developers around the world. Even though GOSH isn’t on Everscale due to its economic model (some operations on its blockchain shouldn’t have any fee), Everscale will benefit long-term from GOSH.
The next product was also designed for developers to make their lives easier. The industrial tools for smart contract verification have grown into a product called Ursus. It’s a formal verifications framework, which offers a translator from Ursus to Solidity . Formal verification is one of the most expensive and time-consuming procedures in smart contract development, as it’s important to verify the code before deploying it; otherwise, the cost of an error would be exorbitant. Ursus will help save hundreds of hours of projects’ time, and it’s a one-of-a-kind product in the industry.
The DAO Constructor milestone is complete. We already have two DAOs on Everscale (EVER DAO and Octus Bridge DAO), and anyone can fork the code on GitHub and launch a new one. We hope to see more projects following a decentralized model of governance in the future.
Last but not least is the integration of the Milkomeda Rollup – a Layer 2 for Ada to Octus Bridge. The Broxus team is continuously working on adding more chains to its products, and Everscale has a chance to become a kind of decentralized hub for many projects.

We’ve done a lot of work this year, but it’s just the beginning. Everscale incorporates almost all modern blockchain concepts, and only a few projects can be compared to our tech. Our current scope is to promote our ecosystem among developers, because we need more teams with new products. A lot of work is being done behind the scenes – conferences, hackathons (read more here), grants, and new incentives for developers willing to join. We have been listed on Huobi, KuCoin, BitMart, and Coinstore. So, the future is looking very bright for the project, and we’ll continue working on promoting Everscale for it to become one of the biggest projects in the blockchain industry.

More About the Everscale network:

☄️We will distribute about 25% of the total token supply to the Farming/staking reward pool.

Crypto News of the Day: Aave wants to launch a DAI rival, Reddit NFT avatars will glow in comment...

CBDCs are far from how they were initially conceptualized, as revealed by Oliver Gale, founder of the first digital dollar project.