Weapon Box and the secrets behind it

Weapon Box and the secrets behind it 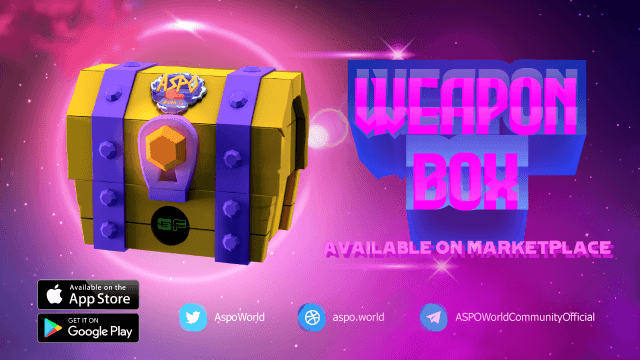 ASPO World's weapon box has been officially launched to the gaming community from the fourth quarter of 2021. Today's article is to focus on why Weapon Box should not be undervalued.

ASPO World's weapon box is a lucky box that contains only one weapon, which helps players use, equip and strengthen the main general of the squad. The weapons contained in the box will have some common characteristics in terms of quality and conditions of use. Specifically, all weapons on sale on the Marketplace (including the weapon box) have the Ascension quality and can only be used when players reach level 50. Each weapon will include certain elements: weapon system, weapon type and specific stats.

In particular, weapons will be divided into 6 types of energy, including Fire - Water - Lightning - Earth - Wind - Ice. Each of the above weapon attributes has separate stats and counters each other. Depending on the choice of the main skill for the champion as well as the player's tactics, players can equip the appropriate weapon system to support and empower their main champion.

As players have experienced in the beta test, ASPO World has a total of 3 main character classes. Each character class will have 2 sub-classes. The first champion selection is the default class. The second class is opened when players reach level 50. Although there is a distinction between 2 classes for a champion, the strength of the champion depends mainly on the player's formation and strategy. By being able to switch back and forth between the two classes and combine purchased Ascension-quality weapons, players can easily optimize the main champion's stats, creating an unpredictable variation that makes the opponent unable to fight. And when doing so, players will need a 2 readily available Ascension-quality weapons to switch constantly.

Besides, Ascension quality weapons purchased in the weapon box have much higher stats (about 40%) than Elite weapons of the same level. To upgrade the level of Ascension weapons from level 50 to level 60, players can apply the accumulation rule to save materials as well as time to collect materials. (Example: Making a level 50 weapon requires 5 X materials. Making a level 60 weapon requires 25 X material. If a level 50 weapon is available, it only costs the player 20 X material to upgrade to a level 60 weapon)
With a limited stock of 999 boxes of weapons on the Marketplace, the project is not expected to open more sales for weapon boxes in the future unless there is a critical need to do so.
Until now, the number of weapon boxes is limited to 999 boxes. AND THERE IS NO MATERIALS TO BE DROPPED IN THE OFFICIAL GAME FOR PLAYERS TO COLLECT. Therefore, investing in the weapon box at this moment should be seen as a wise move for early investors.

a year ago
•
1 min read
Announcements

TopGoal & Mars Collab and Take on the DeFi Sector

a year ago
•
5 mins read
Announcements

Elrond Bets Big On Web3 Payments In 2022 With The Acquisition Of Leading Crypto Payments Provider...

Applications for the Braintrust Grants Program are now open!

a year ago
•
1 min read
See all articles