Will Web 3.0 tokens take off in May? Here is a price analysis of some of the most popular Web3 tokens. Let's find out which ones you should keep an eye on this week! 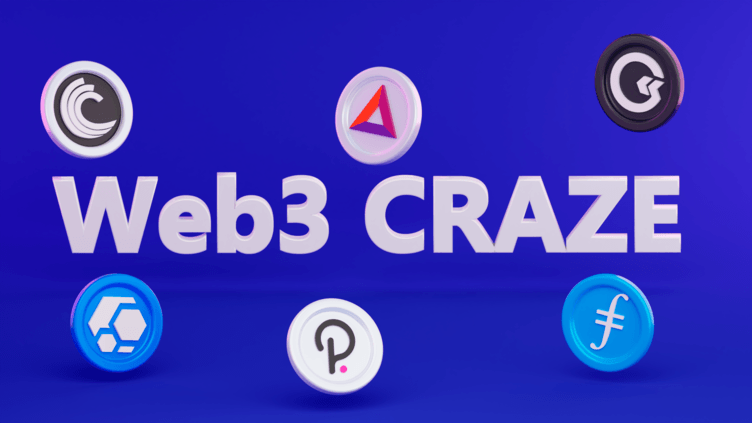 The NFT space is experiencing a new wave of interest in four-digit Ethereum Name Service (ENS) domains as sales have zoomed in the past week. Can this new wave trigger yet another rally in the top Web 3.0 coins?
Last week, Bitcoin showed no signs of ending the downtrend as it fell by over 3% from the $40,000 mark. However, there might be some relief amongst investors as Bitcoin is now trading near a strong support of $37500 due to which a short-term bounce may be seen later this week.
In this week's technical analysis we will be looking at some of the top Web 3.0 coins that may outperform Bitcoin in the coming weeks. Before moving on, always remember that this is not financial advice to buy any of the coins mentioned below, and that technical analysis is just a tool that helps us stay informed in the market. Now, let’s have a look at the charts of the coins that could soon lead the Web 3.0 movement!
Subscribe

After its listing earlier in March this year, GMT has surged by a whopping 2800% in under two months!

GMT has been trading in a strong uptrend ever since it was listed and has formed a bullish pyramid structure. It is once again in an accumulation phase and may soon rally to a new all-time high as it has previously done after accumulating for several weeks!

A point of weakness can be seen in the RSI as it has been falling for the last few weeks thus investors must keep caution and maintain a stop-loss below the previous accumulation zone at $2.70.

DOT has been testing investors’ patience as it has consolidated in the range of $15 to $23 since February. DOT slumped in price by over 30% in April and has reached a crucial demand zone at the $15 mark which if broken could result in a potential downside of over 30%.
A break of the demand zone was seen last week when Dot fell by 10% to the liquidity zone at $14. However, a reversal was seen from the liquidity zone which seems like a retest of the supply zone. Investors should still avoid buying this token until a break of the supply zone at $16 is seen. If the supply zone is flipped, investors can aim for a target of $24 by setting a stop-loss at the previous low of $14.

Investors that have hodled since April may finally see an upward move in BTT after a strong downtrend that resulted in BTT trading over 30% lower in April!
BTT has formed a descending triangle and is now trading in a very tight range where it is being squeezed by the trendline and the demand zone. A significant move could be seen once BTT breaks out on either side of the triangle.
It is looking like a false breakdown may have been seen last week, as BTT brokedown from the demand zone but quickly recovered and was trading back above the demand zone in under a day. The false breakdown can be confirmed once BTT breaks out from the resisting trendline and a strong bullish move should follow the breakout!

It is looking like bears are in control of the BAT token and the downtrend could set new lows in the coming weeks. BAT fell by over 16% to $0.60 last week as it broke down from a very crucial demand zone and broke the low set in February which shows that the sellers are very strong at the moment.
BAT had been consolidating in a tight range since the start of the year and after failing to break the support at $0.62 after multiple attempts it finally broke down last week.
Buyers should stay away from the token until it is able to clear the supply zone at $0.60 as it is looking very weak with no price support anywhere near the current price level.

Investors may finally soon see the reversal that they have been waiting for since April as FLUX broke its structure of forming lower highs and lows last week.
A huge volume spurt was seen last week with large volume spikes seen in the 4H chart of FLUX. Could this be the long-awaited return of the bulls?
FLUX has started the week off with great momentum and it is looking like it will soon test the supply zone at $1.70. It is looking like crypto whales are back in FLUX with huge orders which could give it the strong bounce that it needed from the demand zone at $1.280.

FLUX will definitely be a coin to watch out for in the coming weeks as it has broken the downtrend structure and a reversal looks imminent.

A highly unusual move was seen last week as FIL fell by over 30% in just 4 hours. Was this move set up just to shake out the buyers before it starts rallying again?
FIL crashed by over 30% last week which resulted in FIL breaking a very strong demand zone thus making it very risky for buyers to buy the dip in FIL. Buyers should wait for FIL to reclaim the $17 mark as this will confirm the shakeout and could be followed by a strong impulsive move. If FIL can reclaim the $17 mark, a target of $22 can be set for the coming months.

Investors must remain patient as FIL could also just test the supply zone and continue the downtrend and hit new lows in the coming weeks.

A Quick Recap Of All the Coins

Trading Analysis
Technical Analysis: MANA, APE, SAND, RACA, GST, AXS and GALA Price Prediction (June – W3)
It's been a tough week for all tokens after Bitcoin’s fall from grace. Let's see if which NFT & metaverse coin will be able to keep its head above water and which ones should you get rid of!
By Scarpa
1w ago
4m
Trading
PayPal to Increase Fees on Small Crypto Transactions
It appears the new regime is specifically designed to make smaller crypto transactions more expensive. A $10 buy will soon cost twice as much as it did before.
By Connor Sephton
4mo ago
3m
Trading
What Is Bitcoin Stock to Flow (S2F) model and How to Use It?
Is Bitcoin S2F model a crystal ball for crypto? Or should we throw it in the trash can of ideas that didn’t quite pan out? Today, CoinMarketCap Alexandria analyzes the accuracy of this tool.
By Will Kendall
2w ago
6m
See all articles