How Is Cryptocurrency a Threat to the Traditional Banking System?
Table of Contents
What Are The Advantages of Cryptocurrency?
High-Performance Investment Vehicles
Remittance Market
Smart Contract Innovations
What About Cooperation Instead of Competition?
Crypto Basics

How Is Cryptocurrency a Threat to the Traditional Banking System?

In the race of decentralization versus centralization, cryptocurrency is not only replacing the traditional banking system but also the conventional asset classes. 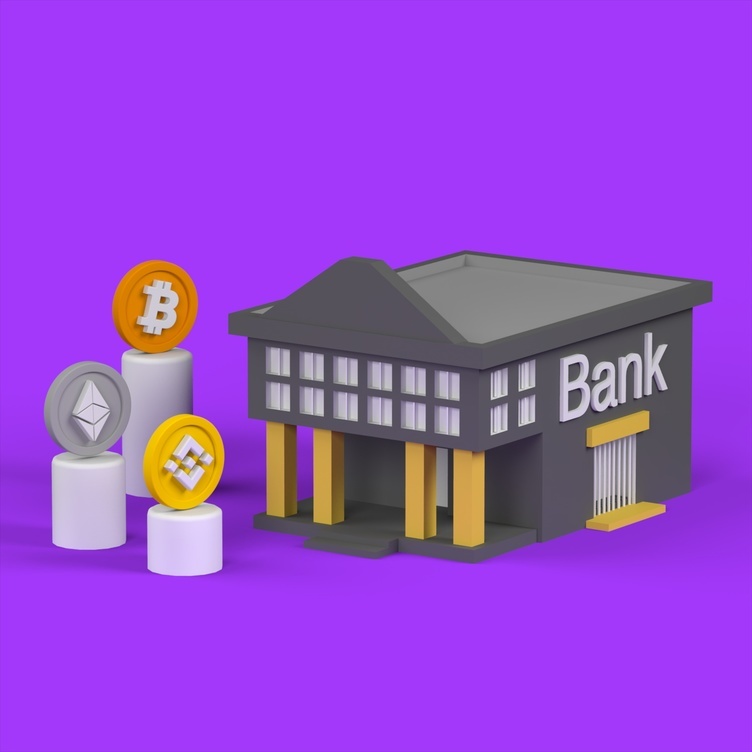 Designed from the ground up to have disruptive potential, cryptocurrencies and related blockchain-based solutions have been making inroads into the traditional financial system over the past decade.

What Are The Advantages of Cryptocurrency?

Owing in large part to the decentralized, peer-to-peer nature of blockchain technology, cryptocurrencies have a number of advantages — but also disadvantages — compared to centralized legacy systems.
Blockchain is a decentralized digital ledger that can be used to record monetary transactions, as is the case with cryptocurrencies, along with other kinds of data. Its operation is maintained by a large network of independent miners with no single person or organization in charge.
Besides the somewhat superficial technical advantages, such as 24-hour uptime and instant, direct processing of settlements, that lack of central authority ensures that nobody can impose extortionate fees, hold your funds hostage, or restrict access to essential services on a whim. This democratizing effect of crypto is probably the single most important factor that threatens to upset the status quo in the traditional banking and financial systems which tend to rely on exclusivity and a lack of transparency to make a profit.
Importantly, this decentralization philosophy extends beyond just the technology and permeates the entire cryptocurrency and blockchain industry. Cryptocurrencies are software, meaning that they aren’t capital-intensive to create; you also don’t need a government-issued license to launch one. Moreover, with smart-contract platforms, such as Ethereum (ETH), the technical complexity of creating a new coin is also significantly reduced.
The end result here is that almost anyone can bring a new product to the market — and they do, leading to the existence of hundreds of thousands of alternative coins in 2021. A lot of these (some would even say most) are pretty bad, ranging from unoriginal clones of more popular cryptocurrencies to outright scams. The emergence of quite a few innovative, unique solutions that are completely changing the game, the fact that makes up for the scams in this industry.

Compare this with the highly regulated, rigid environment of the banking sector, where a number of major companies compete with each other on paper, but in practice offer highly homogeneous products. With this comparison, it will become pretty clear how and why this market is threatened by crypto.

Let’s take a look at how exactly the complacent traditional banking and finance systems are threatened by crypto and what advantages does it leverage to achieve its disruptive effect.

Perhaps the most striking instance of cryptocurrencies revolutionizing a stagnant industry comes from investing. Bitcoin (BTC) has suffered major crashes in its lifetime — having lost over 80% of its value at several points. These setbacks, however, completely pale in comparison to the explosive growth it has experienced over the past ten years, making it one of the world’s best-performing asset and by an incredible margin.
Bitcoin has grown from less than $1 in 2010 to a high of about $64,000 in 2021 — an increase of over 20 million percent by some calculations. In comparison, the S&P 500 stock market index has “only” tripled in that time. The best-performing individual stocks of the past decade, such as Netflix and Domino’s Pizza, have posted exceptional gains of about 4,000%, but still didn’t even come close to Bitcoin’s numbers.
This unprecedented performance as an investment vehicle isn’t exclusive to Bitcoin: for example, Ethereum went from $2.31 in January 2016 to $2,317.50 in July 2021, and Dogecoin (DOGE), which was priced at well below a single U.S. cent for most of its existence, is now worth over $0.20.
The gradual shift away from traditional investment opportunities and towards crypto is quite apparent: 7% of British adults invested in crypto in 2020 versus 5% in the stock market, and over a third of U.S. millennial millionaires hold at least half of their funds in crypto. It is hard to say with confidence whether crypto will continue moving in the same direction and at the same pace over the next decade, but so far its track record has been entirely groundbreaking.

The global remittances, predicted to reach a volume of almost one trillion U.S. dollars by 2026, are another market where cryptocurrency is cutting into the hitherto unchallenged market dominance of traditional services and systems.
Cryptocurrencies offer low fees that are independent of transaction size, instant settlements, and universal availability in both a geographical and socio-economic sense; these are all important advantages over legacy remittance services, such as Western Union or bank transfers, that charge arbitrary fees, sometimes take days to process transactions, and usually offer limited accessibility in the developing economies.
The most recent and prominent example of the eagerness with which people jump at the opportunity to use crypto for international transfers is El Salvador, about 20% of whose GDP is comprised of remittances sent from overseas. The Central American Republic has declared plans to make Bitcoin legal tender on June 9, 2021 — the first-ever country to do so.
This move is perhaps a reflection of the growing interest in Bitcoin remittances in the country, the volume of which grew fourfold between May 2020 and 2021 and should be expected to continue growing after the government’s decision comes into effect on September 7.

Blockchain is not only popular for improving the performance of simple monetary transactions, as the emergence of platforms like Ethereum or Cardano (ADA) that support smart contracts — multi-party agreements self-enforced by software code — has given rise to all kinds of exotic solutions that aren’t merely trying to improve the existing systems but create entirely new ones.
Some of the best things that came out of blockchain technology include non-fungible tokens (NFTs) —  the assets that are reinventing and digitizing the rules of asset ownership, Synthetic assets —  the products that replicate the performance of stocks, bonds, and other derivatives without the associated barriers to entry, and decentralized finance (DeFi) — an entire movement dedicated to providing blockchain-based alternatives to traditional finance; there are too many examples to list in one article.

What About Cooperation Instead of Competition?

Point-of-sale (PoS) payments, on the other hand, are an example of an industry where cryptocurrencies are complementing, rather than replacing existing solutions. Attracted by the opportunity to access a broader market and the advantages of instant settlement and protection from chargeback fraud, more and more retail merchants are starting to accept crypto payments either via dedicated PoS payment terminals or crypto ATMs installed in their shops.
In fact, a 2020 study by the insurance firm, HSB, revealed that as much as 1/3 of small and medium-sized businesses in the U.S. already accept cryptocurrency payments for goods and services.

So, in the end, does competition between crypto and traditional banking have to be a zero-sum game or is there room for mutually beneficial solutions that leverage the advantages of both?

The answer is certainly the latter if we ask R3, a consortium of dozens of banks and other financial institutions, including HSBC, Barclays, and Royal Bank of Canada. Their Corda platform, while not precisely a blockchain in the strictest sense of the word, nevertheless takes advantage of many aspects of the distributed ledger technology (DLT) in order to enhance the way banking systems communicate with each other.
Even governments are finding it hard to resist the allure of crypto. According to Ripple, more than 80% of central banks around the world are looking into creating their own digital currencies (CBDCs), most of which are expected to also be based on the DLT technology. The Bahamian Sand Dollar was the first such currency to have become widely available, designed to help integrate the Bahamas’ rural “family islands” into the country’s wider economy.
This article contains links to third-party websites or other content for information purposes only (“Third-Party Sites”). The Third-Party Sites are not under the control of CoinMarketCap, and CoinMarketCap is not responsible for the content of any Third-Party Site, including without limitation any link contained in a Third-Party Site, or any changes or updates to a Third-Party Site. CoinMarketCap is providing these links to you only as a convenience, and the inclusion of any link does not imply endorsement, approval or recommendation by CoinMarketCap of the site or any association with its operators. This article is intended to be used and must be used for informational purposes only. It is important to do your own research and analysis before making any material decisions related to any of the products or services described. This article is not intended as, and shall not be construed as, financial advice. The views and opinions expressed in this article are the author’s [company’s] own and do not necessarily reflect those of CoinMarketCap. CoinMarketCap is not responsible for the success or authenticity of any project, we aim to act as a neutral informational resource for end-users.
5 people liked this article

Crypto Basics
Why China’s DCEP Experiment Should Scare Crypto Evangelists
China's national cryptocurrency has created a lot of excitement, but it demonstrates a potentially dark application of blockchain technology.
By Werner Vermaak
10mo ago
6m
Crypto Basics
What Are Flash Loan Attacks?
Flash loans are becoming a bigger part of DeFi — and along with their increasing popularity comes an increase in flash loan attacks.
By Werner Vermaak
1yr ago
8m
Crypto Basics
7 Ways to Generate Passive Income With Crypto
Tired of constantly keeping track of your portfolio, capitalizing on opportunities, and managing your positions? Here are seven ways to generate passive income with crypto!
By Daniel Phillips
5mo ago
9m
See all articles