The Evolution of Decentralized Exchanges

While today’s DEXes are largely feature-packed and intuitive to users, things have come a long way since their early days. In this article, we look at how the DEX landscape has evolved. 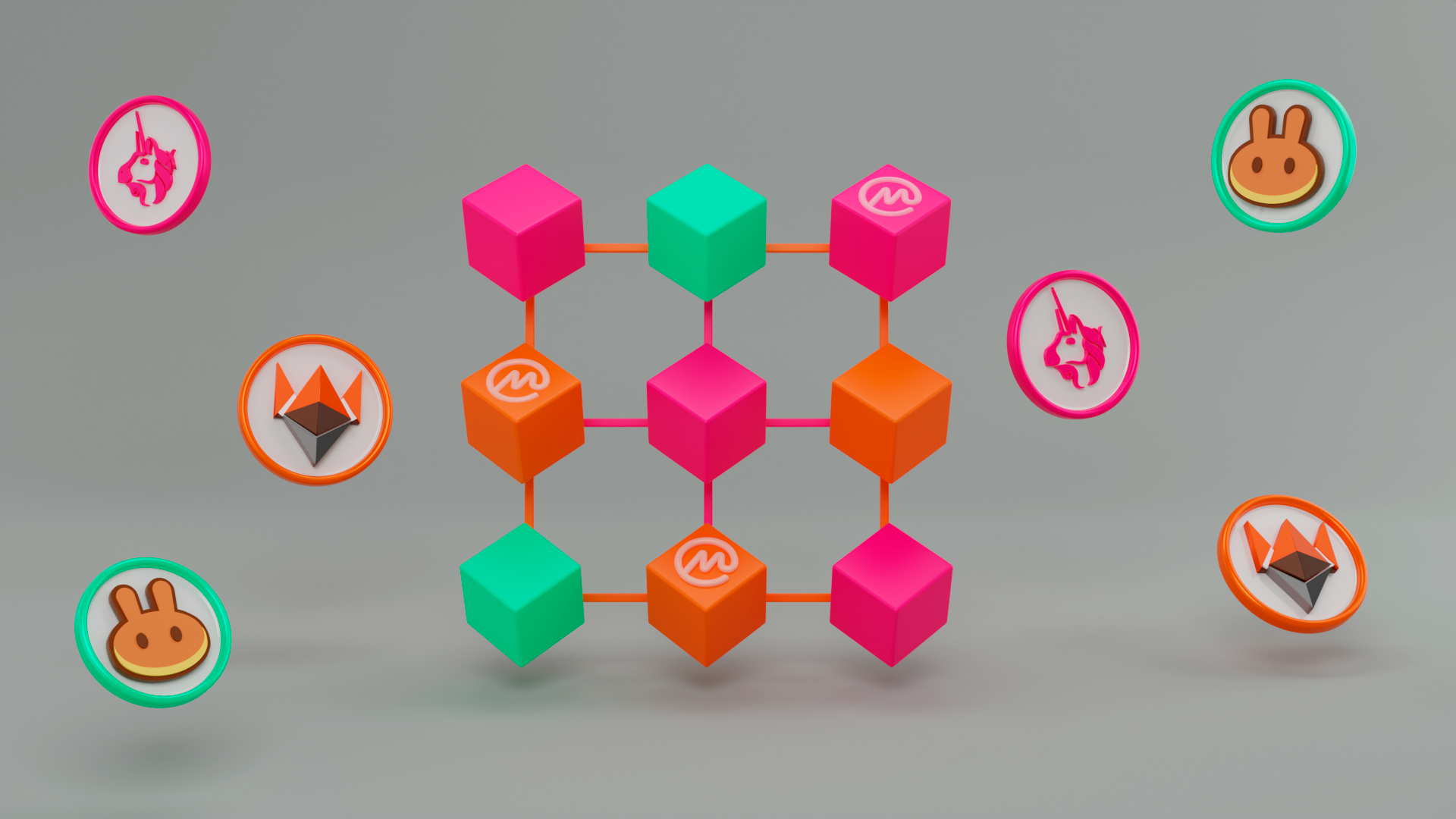 Don't have time to read? Check our video instead! ⬇️
Decentralized exchanges, or DEXes, are a staple in today’s decentralized finance (DeFi) landscape.
Allowing users to trade in a completely permissionless and peer-to-peer manner, these platforms have revolutionized the way that users trade cryptocurrencies.

But while today’s DEXes are largely feature-packed and intuitive to users, things have come a long way since their early days.

Here, we take a look at how the DEX landscape has evolved in recent years.

Cast your mind back to 2016 and you might remember the first generation of decentralized exchanges.

Platforms, like IDEX, EtherDelta and ForkDelta, began their operations around this time. For the first time, they allowed users to trade cryptocurrencies in a peer-to-peer manner, reducing the need for OTC groups and minimizing the need for trust.

But these first-generation platforms suffered from the same common set of problems:

Despite being non-custodial, many first-generation DEXes weren’t fully decentralized and could instead be considered hybrid platforms. As a result, they were prone to regulatory attacks, and some platforms were forced to block IPs from specific regions and implement KYC/AML policies.
But more problematic was their slow and clunky user interfaces, which usually required users to transfer their tokens to the smart contracts of the platform or create an account just to set their limit orders. The platforms themselves were often slow as well, making it difficult to trade efficiently.
These pain points helped shape the next generation of DEXes — known as automated market makers (AMMs) — and many first-wave DEXes have since evolved to tackle these teething problems.

2018: The Advent of the Automated Market Maker

It wasn’t until November 2018 that the DEX space first began to pick up momentum with the advent of the first popular AMM, known as Uniswap.
The platform changed the way people think about peer-to-peer trading by introducing the concept of decentralized liquidity pools and pricing curves.
By allowing users to deposit their assets into two-sided liquidity pools that use a mathematical formula (typically the constant product formula) to determine the relative value of each asset, it essentially solved the liquidity problem. Uniswap also helped to price newer and more speculative assets efficiently, helping to fuel a Cambrian explosion of ERC-20 assets.

The AMM model became so popular that it is now used by the vast majority of decentralized exchanges, while just a handful can be considered the order book DEXes.

Today, practically every major DeFi-capable blockchain has its own AMM (or range of AMMs), many of which can be considered Uniswap clones or forks. This includes the massively popular PancakeSwap DEX (for BNB Chain), SpiritSwap (for Fantom), and Pangolin (for Avalanche).
Nowadays, DEXes can be better described as DeFi hubs. Besides facilitating asset swaps, most typically have a range of additional features, including yield farms, decentralized lending services and launchpads.

Did you know? DEXes added rocket fuel to the MEV landscape — Learn more.

The vast majority of current-generation decentralized exchanges can be considered asset agnostic. They generally allow users to trade whichever assets they want, so long as a liquidity pool for that asset exists.

But more recently, a new generation of platform-specific DEXes has appeared. These are usually purpose-built for a specific ecosystem, and they allow users within that ecosystem to trade a restricted range of assets.

One of the first examples of a platform-specific DEX is Katana, an AMM built on Ronin Chain. The platform is designed specifically for Axie Infinity users, allowing users to trade the native assets of the Axie Infinity ecosystem — including Smooth Love Potion (SLP) and AXS, as well as generic assets like Ronin (RON) and USD Coin (USDC).
XCAD Network, the Youtube creator and fan engagement platform is also working on a platform-specific DEX — but this time for creator tokens. The DEX will allow users to trade permissionlessly their favorite creator tokens against a range of stablecoins, forming a closed trading environment for XCAD users.

Given that some independent DApps can clock in potentially millions of active users, platform-specific DEXes can rack up an impressive trading volume.

Indeed, despite only catering to Axie Infinity players, the Katana DEX has frequently achieved $100M+ in daily trading volume, and averages over $2M/day — making it one of the 50 largest DEXes by trading volume.

The vast majority of today’s DEXes either operate on a single chain or an independent version of the DApp is available on multiple chains with no cross-chain trading capabilities.

But thanks to advances in cross-chain technologies like bridges and atomic swaps, the first generation of cross-chain DEXes are now up-and-running. This includes the likes of Atlas DEX, Swappery, SushiXSwap, THORswap and a handful of others.

To date, most of these leverage a combination of bridges and decentralized liquidity pools to pull off cross-chain swaps, while other platforms aggregate liquidity from DEXes on different blockchains, again, using bridges to move tokens between chains.

As an interoperable ecosystem of blockchains, Cosmos also features a variety of cross-chain DEXes, such as Osmosis and Crescent. But it should be noted that these are constrained to the Cosmos ecosystem and cannot bridge assets from non-Cosmos SDK blockchains.

A handful of atomic swap DEXes now exist such as Atomex, but none has achieved widespread adoption.

The DEX industry is brimming with innovation and can be considered one of the fastest-moving sectors of the DeFi space.

In just six years, we have seen the advent of multiple generations of DEXes, with some of the more popular options now beginning to rival the usability, features and liquidity of centralized platforms.

The beginning of the next generation of DEXes is also taking shape. This includes the likes of Sudoswap, which just launched the sudoAMM — a DEX that changes the way that users buy and sell NFTs through the use of AMM-like bonding curves.

Central bank digital currencies (CBDCs) might also get the DEX treatment.
Currently being explored by central banks in more than 100 regions worldwide, there is a good chance that a regulated CBDC DEX could be launched in the future and a small chance that a permissionless DEX will be launched — since most CBDCs are likely to launch on permissioned blockchains.

But this is likely several years away, at the very least.

Crypto Basics
Week in DeFi: Lending Protocols Ship, a Bustling Cosmos and Proof-of-Innocence
Check out our weekly roundup packed full of DeFi tweets, news and alpha you don't want to miss out on — as protocols continue to ship amidst the consolidation of the recent rally.
作者：0xKira
18 hours ago
5分钟
Crypto Basics
Week in DeFi: Frax Leads LSD Race, MetaMask Hops on the Bandwagon
Another exciting week in DeFi as markets rally and the LSD narrative heats up — check out our weekly roundup of the most important DeFi tweets, news and alpha you can't miss out.
作者：0xKira
5 days ago
4分钟
How-to Guides
The Ultimate Guide to Ethereum Liquid Staking in 2023
Everything you need to know to put your ETH to work.
作者：Ivan Cryptoslav
1 week ago
9分钟
See all articles