CoinMarketCap and Nansen look at the latest events in the metaverse — from the UAE facing backlash on outlawing cyber murders, to Tripp raising $11.2 million for the mindful metaverse. 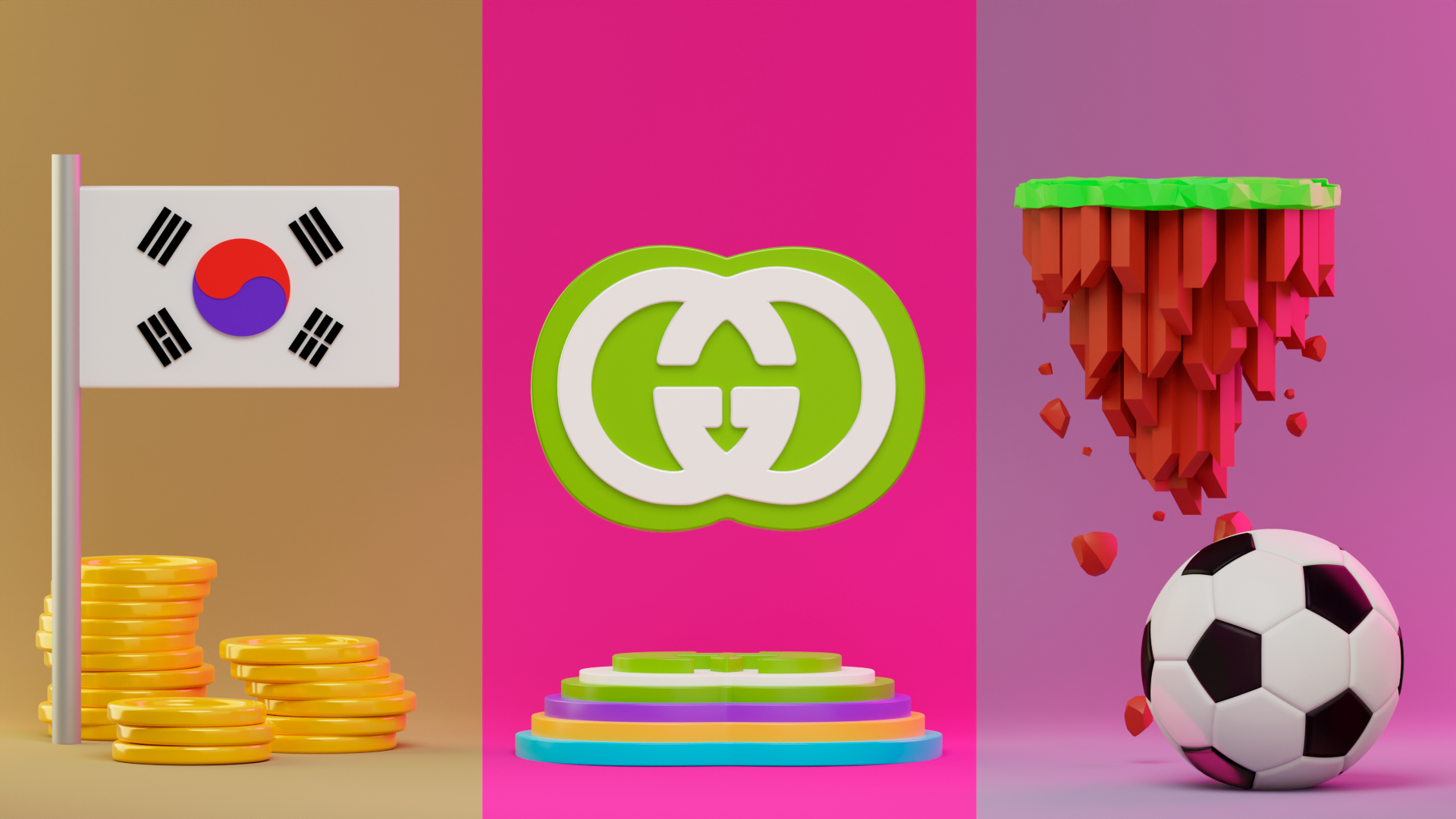 The South Korean government is putting its money where its mouth is. Over $177 million is being set aside to invest in metaverse projects. Meanwhile, a comment from a UAE minister about outlawing murder in the metaverse has irked many activities, who labeled the move as hypocritical.

Here’s a rundown of some top stories that happened in the metaverse space over the past week.

“I’m really excited to be involved in the Sports Metaverse. This is the new frontier when it comes to sports. The metaverse and owning a piece of it is about interaction and co creation – watching live sports with friends all around the world, hanging out with friends, and buying and selling NFTs are some of the things I’m really looking forward to doing here,” said Shaun, who plans to use his land to host events and display his NFTs.

In addition to the duo, Sports Metaverse also announced that four companies had also purchased land in its virtual work. They include, ThriveFantasy, Phat Fantasy, Own the Moment, and Beyond The Game Network. Meanwhile, agreements are on the way to on board more leading athletes from soccer, MMA, tennis, basketball, and baseball.

“Both Shaun and Jordan have played at the top of their profession, so it’s an honor to have these athletes join the Sports Metaverse. I still remember the goal that Shaun scored against Manchester United in 2004, and Jordan has had a great career here in the UK and in the USA. What strikes me the most about these two is their passion for web3, communities, and the interaction with athletes that the Sports Metaverse will give to consumers,” said SportsIcon COO and Co-Founder Alexi Yovanoff.

Investments have continued to pour into the metaverse, an industry that is estimated to reach $13 trillion by 2030.
Subscribe

The South Korean government is very serious about its vision of becoming a leading market for metaverse activities. Authorities have announced that the government will start investing directly in metaverse projects.

Over the past week, Lim Hyesook, the minister of Science and Information and Communication Technologies, revealed that more than $177 million will be set aside to fund national employment and business initiatives linked to the metaverse.

He dubbed the metaverse “an uncharted digital continent with indefinite potential,” noting that the South Korean government will invest 223.7 billion won (approximately $177.1 million) into the sector as part of its Digital New Deal, an initiative aimed at encouraging citizens to participate in a digital society.
The move positions South Korea as one of the first countries to openly devote resources to the burgeoning industry. On a city level, Seoul’s metropolitan government is constructing a 3.9 billion won metaverse platform that will allow citizens to virtually access public services. This is all part of the region’s broader Web3 concept, which houses the metaverse, augmented reality, virtual reality, and blockchain technology.

According to JP Morgan, Facebook’s parent company Meta Platforms Inc. is primed to become Broadcom Inc’s next billion-dollar customer amid its dream to become a key player in the metaverse. Meta is expected to tap on Broadcom’s custom chips to build its metaverse hardware, analysts at JPM said last Tuesday.

Application-specific integrated circuit (ASIC) chips are expected to generate between $2 billion and $2.5 billion in revenue for the chip maker this year, primarily fueled by deals with Meta, Alphabet and Microsoft.

"We believe these wins are primarily at 5 nanometres and 3 nanometres and will be used to power Meta's metaverse hardware architecture that it will deploy over the next few years […] Near-term ASIC program pipeline is strong as we believe Broadcom will be ramping Meta/Facebook and Microsoft ASICs this year," analyst Harlan Sur said.

A handful of tech giants are betting big on the metaverse. Back in January, Microsoft made a profound metaverse play when it decided to purchase Activision Blizzard for a whopping $69 billion. Meta, on its part, is also investing heavily in the metaverse.

Sur is confident that Meta will become Broadcom’s next $1 billion-a-year ASIC customer over the next three to four years. Notably, Meta is working on a wide range of hardware products for the metaverse, including virtual reality headsets, smart glasses, as well as a physical store where customers can try out these devices and gadgets.

Broadcom also teamed up with Google to co-develop the latter’s custom chip used for machine learning since 2016, with brokerage estimates of over $1.3 billion in 2022.

Ironically, despite Meta’s investment in the metaverse, CEO Mark Zuckerberg recently told shareholders that they shouldn’t expect any profits in the next couple of years.

Last week, CoinMarketCap in its “Metaverse Weekly Wrap” reported that Omar Sultan Al Olama, the United Arab Emirates Minister of State for Artificial Intelligence, called for legislation to outlaw murders in the metaverse. In his argument, Olama said:

"If I send you a text on WhatsApp, it’s text, right? It might terrorize you but to a certain degree it will not create the memories that you will have PTSD from it […] But if I come into the metaverse and it’s a realistic world that we’re talking about in the future and I actually murder you, and you see it. It actually takes you to a certain extreme where you need to enforce aggressively across the world because everyone agrees that certain things are unacceptable."

The minister’s comments did not go down well with many activists, with many opining that the region’s true goal is to push legislation to curb dissidents in the virtual world.

Similarly, Khalid Ibrahim, the co-founder and executive director of the Gulf Centre for Human Rights, said the minister’s comments were hypocritical since the UAE was interested in murder in the metaverse while activists are jailed and kept in harsh prison conditions.

"Legislations, such as the cyber-crime law, and other laws, are used to imprison activists […] In prison, they're really treated so badly, just because they called for a bit of respect, as well as civic and human rights of citizens," he told MEE.

Since the 2011 Arab Spring uprisings, the government has employed a number of cyber-security tools to keep rights activists in check. In 2021, Abu Dhabi enacted the cyber-crimes laws, which according to Human Rights Watch (HRW), closed down the last remaining realm of freedom of expression in the country.

Hamad Alshamsi, executive director of the Emirates Detainees Advocacy Center, believes that the attempt to police the metaverse is simply an extension of these laws.

"The outlawing of the 'virtual murder' in the Metaverse will give the UAE the right to monitor the Metaverse world […] The purpose of this statement is not to combat crime, but [is] an introduction to the censorship of Metaverses. They use spyware under the pretext of combating terrorism. They are obsessed with controlling and watching everything."

Tripp, an award-winning leader in XR wellness, has raised $11.2 million in funding to continue the development of its meditation apps that power the “mindful metaverse.”

The funding round saw participation from Amazon Alexa Fund, Bitkraft Ventures, HTC, Qualcomm, Niantic, and Mayfield. And according to the company, the new capital will be used to boost global demand for mental wellbeing through Tripp’s XR wellness program.

Tripp has also acquired BeardedEye’s world-building platform Eden. This will allow users to interact with other people, as well as customize their experience on the platform.

“We’re grateful that more and more investors are recognizing the need for innovative wellness tools that expand beyond traditional meditation apps,” said Nanea Reeves, founder and CEO of Tripp, in a statement. “Through our acquisition of Eden, we’re one step closer to truly building a mindful metaverse and establishing a safe space for transformative experiences in digital realities, while also empowering creators to join us in our mission.”

A luxury Italian fashion house, Gucci, has deployed a permanent space on the metaverse. Dubbed Gucci Town, the virtual space is being hosted on Roblox and will allow customers to rock digital goods, play mini-games to earn virtual currency, and interact with other Gucci lovers.

Gucci describes its metaverse project as a “dynamic destination” where users can explore the vision of creative director Alessandro Michele, connect with like-minded people, and express their individuality. Visitors can walk from the central piazza to MiniGame Heights or Creative Corner, where they can either participate in Gucci-inspired competitions or create art combos with colors, shapes, and patterns.

A virtual Vault Plaza is also part of the side attractions. The plaza is home to an exhibition space inspired by the company’s experimental concept store, Vault. Vault Plaza will showcase some of the brand’s latest products and collaborations.

As expected, Gucci has also thrown in the spice of digital collectibles. Limited-edition collectibles will be available to outfit Roblox avatars.

Christina Wootton, Roblox VP of global partnerships, said that the vision of Gucci Town is to “build and create a community that [users] can engage all year long.”

Users will be rewarded with GG Gems for participating in the activities in the virtual space. The in-experience currency can then be used to purchase power-ups and virtual Gucci products.

Nansen’s Metaverse-20 index trades sideways for the last 7 days. It is still the best performing sector year to date, with an increase of 14% in ETH terms. Interestingly, we see a few collections having double-digit percentage increases in their floor prices over the time period. NFT Worlds, CyberKongz VX, WebbLand all saw 12-14% increases while Fluf World: Burrows had an incredible 47% increase.
If you’re interested in diving into analytics on NFT collections, you can start your journey on Nansen for free by signing up today!
This article contains links to third-party websites or other content for information purposes only (“Third-Party Sites”). The Third-Party Sites are not under the control of CoinMarketCap, and CoinMarketCap is not responsible for the content of any Third-Party Site, including without limitation any link contained in a Third-Party Site, or any changes or updates to a Third-Party Site. CoinMarketCap is providing these links to you only as a convenience, and the inclusion of any link does not imply endorsement, approval or recommendation by CoinMarketCap of the site or any association with its operators. This article is intended to be used and must be used for informational purposes only. It is important to do your own research and analysis before making any material decisions related to any of the products or services described. This article is not intended as, and shall not be construed as, financial advice. The views and opinions expressed in this article are the author’s [company’s] own and do not necessarily reflect those of CoinMarketCap. CoinMarketCap is not responsible for the success or authenticity of any project, we aim to act as a neutral informational resource for end-users.
7 people liked this article

Crypto News
Vitalik Buterin's Written a Book — It's Going to Be Released in Four Weeks
Proof of Stake documents Buterin's essays before and during the rise of Ethereum — and an official website suggests the book may criticize his fellow co-founders.
Bởi {author}
1 month ago
2m"
Crypto News
Crypto News, April 22: Musk's Priorities for Twitter, Stolen Axie Funds Recovered, Ethereum Movie
The North Korean group suspected of hacking the Ronin Network might be finding it difficult to launder the stolen crypto.
Bởi {author}
5 months ago
3m"
Crypto News
Ethereum's Vitalik Buterin Criticizes Elon Musk over Dogecoin Proposals
The Ethereum co-founder says there are big flaws in the billionaire's ideas.
Bởi {author}
1 year ago
2m"
See all articles