CoinMarketCap and Nansen look at the latest happenings in the metaverse — from significant losses expected for Meta's metaverse efforts, to the debut of the Hang Seng Metaverse Index. 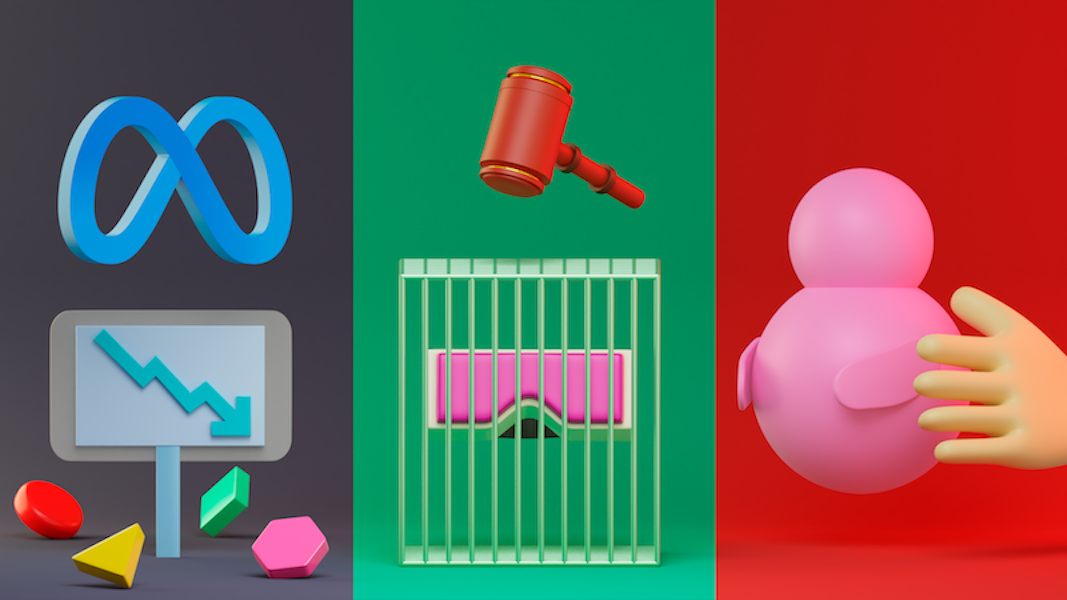 Investing in the metaverse is not all sunshine and rainbows. According to Meta CEO Mark Zuckerberg, the company’s metaverse play may not be profitable for the next five years. But this has not stopped several tech giants from splashing millions on the nascent tech.

From getting harassed in the metaverse to having to pay for your metaverse crimes in real life, here’s a roundup of some of the top stories in the space over the past week.

Nansen’s Metaverse-20 index is down 4% the last 7 days but still maintains its crown as the best performing index. With a year to date increase of 20% in ETH terms, it’s double that of the Social-100 index which comes in second at 10%.
Sandbox Land continues to be the largest collection by market capitalization. Its floor price has also held up well the past month, while most collections in the top 10 are down double digit percentages. If such data interests you, Nansen has tons of NFT dashboards available for free. Sign up today and start exploring!

The metaverse may have been touted as the next big thing but this is no guarantee that it will be smooth sailing for investors, at least not for Meta. In a recently conducted annual meeting, Facebook founder and CEO Mark Zuckerberg told Meta shareholders that the company will lose money in the short-term chasing its metaverse dreams.
Zuckerberg’s comments, first reported by Bloomberg, were in response to a question from a shareholder about the profitability of Meta’s metaverse push. The CEO noted that the metaverse is proving to be a risky bet and would attract “significant” losses for the next three to five years. On the flip side, Zuckerberg clarified that if everything goes as planned then the metaverse could become the company’s cash cow in the future.
Building around this futuristic technology has so far drained around $10 billion from Meta, an amount that Zuckerberg feels is worth sacrificing for the future. However, some people are skeptical. An employee reportedly told Insider that the CEO’s obsession with the metaverse is at the detriment of the company.

During the meeting, another shareholder called for an investigation and shareholder vote on whether the core focus on the metaverse is “prudent and appropriate” for the future of Meta. Notably, Meta currently has 10,000 employees working on its metaverse dreams, with plans to hire another 10,000. But in early May, the company announced a hiring freeze amid fears surrounding potential recession and rising inflation.

In April Citibank released a report stating that the metaverse market had the potential to reach $13 trillion by 2030. Similarly, Fortune notes that many individuals and investors agree that the metaverse presents a unique and valuable opportunity for many tech companies and their shareholders.

Late last year, news broke that a woman testing Meta’s Horizon Worlds platform was sexually harassed in the virtual space. Another woman has been “virtually raped” on the platform.

The metaverse is no safe haven and just like in real life, one should expect malicious individuals lurking around the corridors of virtual spaces. A young female reporter testing out Meta’s Horizon Worlds has claimed that her avatar was “sexually assaulted” in a rather "disorientating and confusing experience."

The 21-year-old researcher was sent to test the app by SumOfUs, a non-profit advocacy organization and online community that campaigns to hold corporations accountable on certain issues. The unnamed woman used the platform for around an hour until she was sexually assaulted by a stranger.

Describing the experience, the reporter said:

Meanwhile, SumOfUs gave details of what transpired in its “Metaverse: another cesspool of toxic content” report. According to the company, the reporter entered the virtual world as a female-appearing and female-sounding avatar. They wrote:

"A SumOfUs researcher was led into a private room at a party where she was raped by a user who kept telling her to turn around so he could do it from behind while users outside the window could see – all while another user in the room watched and passed around a vodka bottle."

It is worth stating that although the app’s Personal Boundary setting is turned on by default, the young lady chose to turn it off after being coaxed by another user. As a result, other avatars could virtually touch her own character which caused her hand controllers to vibrate, "creating a very disorienting and even disturbing physical experience."

"Users have reported seeing graphic content and observing hate speech that is discriminatory, homophobic, racist, and sexual in nature. This behavior harms people of color, members of the LGBTQ+ community, women, and children, making these spaces dangerous and inaccessible.”

In all fairness to Meta, the company has put some checks in place to prevent the actions of malicious individuals from affecting others. A spokesperson from Meta pointed out that the Personal Boundary feature, which is by default turned on, stops non-friends from approaching an avatar. The ‘Safe Zone’ button can also be used to block people if they bother you.

"We don't recommend turning off the safety feature with people you do not know […] We want everyone using our products to have a good experience and easily find the tools that can help in situations like these, so we can investigate and take action."

Murder in the Metaverse Should be a Real Crime, UAE Official Says

Imagine going to jail in real life for killing someone in the metaverse. While this may seem like a scene from a futuristic movie, a minister of the United Arab Emirates wants this to happen.

During a speech at the World Economic Forum in Davos, Switzerland, Omar Sultan Al Olama, the United Arab Emirates minister of state for artificial intelligence, opined that committing serious crimes such as murder should be made illegal in the metaverse.

"If I send you a text on WhatsApp, it’s text, right? It might terrorize you but to a certain degree it will not create the memories that you will have PTSD from it," the minister said, as quoted by CNBC. "But if I come into the metaverse and it’s a realistic world that we’re talking about in the future and I actually murder you, and you see it. It actually takes you to a certain extreme where you need to enforce aggressively across the world because everyone agrees that certain things are unacceptable."
While it makes sense to have some checks and balances on the metaverse, such as outlawing sexual harassment and child sexual abuse imagery, it sounds like an overkill trying to persecute someone for a crime in the metaverse. The idea of virtual murder stretches the definition of the metaverse concept.

Many corporate behemoths and institutional investors are betting big on the metaverse frenzy, and as a result, many companies are rolling out metaverse-related products.

The move to launch a metaverse-related index stems from the growing popularity of the industry as an investment theme among many investors, the company explained in a statement. And in addition to the metaverse index, Hang Seng (a subsidiary of Hang Seng Bank) added Oncology Index to its Megatrend Index Series.

The two new indexes will be calculated and disseminated in real-time at two-second intervals.

The Notorious B.I.G. Comes Back to Life in the Metaverse

Christopher George Latore Wallace, better known by his stage name the Notorious B.I.G., may have passed on, but his legacy is about to live on in the virtual world. The late rapper’s estate has announced plans to make a move on the metaverse mania with a new virtual world called “The Brook.”

Biggie’s estate is teaming up with Burst Live Inc. and Surreal Events to create a virtual world inspired by the rapper’s hometown of Brooklyn. The Brook will feature a virtual model of the rapper himself.

Scheduled to launch later this year, “The Brook” will allow visitors to explore the virtual neighborhood, attend concerts, trade NFTs, and purchase real estate. To gain access to the whole experience, users will need to create an account on The Brook website, which will be available on both desktop and mobile devices. There are also plans to launch activations with VR headsets later this year.

Commenting on the initiative, Voletta Wallace, Biggie’s mother, said in a statement:

“Technology continues to create opportunities that are beyond one’s imagination and I’m excited that we are stepping into the future with a beautiful rendition of a hyper realistic avatar of my son Christopher […] I’m thankful for our wonderful team of creative partners for their work to deliver Biggie into new media for his fans to enjoy.”

As per the announcement, the virtual model of Biggie will be quite realistic and is created from videos and images of the rap star before his death in 1997. Elliot Osagie, the founder of the Brook Experience and creator of the Biggie avatar, wrote:

“I created Biggie's hyper realistic Avatar to extend Biggie’s IP and create content [that] never existed because of his untimely death. In building out a metaverse that was based on reality, it only made sense that we started that story in Brooklyn, and with Biggie. The Brook metaverse launches in Brooklyn and we will eventually map out the entire world. We will map out places like Paris and Lagos which will allow us to bring surreal experiences in the metaverse that the world has yet to see.”

A Singapore-based metaverse startup has raised $36.8 million in a Series B funding round led by Sequoia Capital India.

On Monday, BUD announced that it had plans to launch NFTs following the nearly $37 million raised. The latest capital injection comes three months after it completed its Series A round in February.

“We’re super psyched about the new age social and creative world BUD is inviting young people to help build, and the roadmap the team has laid out for BUD’s fast-growing user base,” said Sequoia Capital India investment advisors Aakash Kapoor and Shenya Wang.

The funds will be used to launch new Web3 products, as well as launch NFT projects that will allow users to buy, sell and own virtual assets tied to the metaverse.

Crypto News
Beeple Hits Back as David Hockney Calls His NFTs 'Silly Little Things'
The row began when David Hockney started slating the digital artist's creations on a podcast.
By Connor Sephton
1yr ago
1m
Crypto News
Fetch.ai Partners With Football Club West Ham United
The English Football Club, West Ham United, has joined hands with Fetch.ai as their global and official partner.
By Hassan Shafiq
6mo ago
2m
Crypto News
Tom Brady Wants to Get Paid in Bitcoin
Brady joins Okung and Culkin as the latest NFL star to get paid in Bitcoin.
By Will Kendall
1yr ago
5m
See all articles