CoinMarketCap Alexandria takes a visual look at some key Ethereum metrics as the year comes to a close. 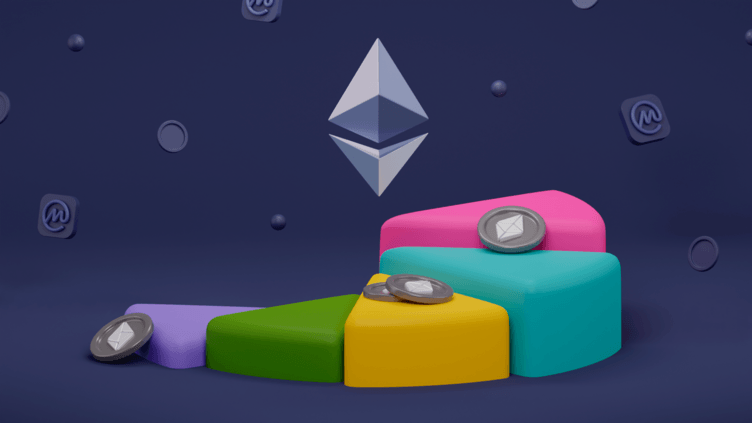 Ethereum investors won’t be happy if they look at the ETH/USD chart — Ethereum has lost a good two-thirds of its USD value year-to-date. But dig a bit deeper and things don’t look that bleak anymore. Let’s have a look at some charts illustrating Ethereum’s fundamentals.

The ETH/USD (in red) chart sure does not paint a pretty picture. But the ETH/BTC (in orange) chart tells another story: ETH is down only a good 15% against BTC year-to-date. Over the summer, Ethereum even significantly outperformed Bitcoin in anticipation of a successful switch to proof-of-stake and heading towards deflationary ETH supply. The excitement slightly faded after the successful Merge. But the market seems to see only marginally more downside risk in Ethereum compared to Bitcoin.

Ethereum makes money? You bet it does! Gas fees are the protocol’s source of revenue, so the higher the gas fees, the more revenue Ethereum makes. When gas fees > issuance of new ETH (as incentives to validators), Ethereum becomes profitable — this is the famous deflationary dynamic in ETH. Ethereum has become deflationary, and thus profitable, for the first time since the Merge. However, this is likely due to the volatility resulting from the FTX fallout.

A profitable Ethereum was not possible with high emissions of new ETH. The Merge — which saw the Ethereum network transition from proof-of-work (PoW) to proof-of-stake (PoS) — decreased the issuance of new ETH by 90%+.

As part of the EIP-1559 upgrade, a part of gas fees are burned. When ETH burned > issuance of ETH, the supply of ETH becomes deflationary, or as the meme puts it: ultra sound money. For now, there has been no short-term effect on the price, but deflationary ETH (at the time of writing) implies the protocol operates in profit —  a massive fundamental change.

Even though the price has been sliding, the number of ETH addresses with a non-zero balance has increased by over 25%. All these addresses are potential or already active protocol users. One address may not necessarily correspond to one user, but this growth is still a testament to greater fundamental interest in Ethereum.

Layer two (L2) users could be called ‘Ethereum power users’ since many will be onboarded from the L1 to an L2. But thanks to lower transaction fees and continued development of DApps, interest in L2s like Arbitrum is growing parabolically: the number Arbitrum addresses has grown by a factor of four this year. This far exceeds growth on the first layer and is even more impressive considering Arbitrum launched in September 2021!

It’s an almost identical picture for Optimism: the amount of active addresses on the L2 has more than 10X’d since the start of the year. The much-hyped launch of the OP token with an accompanying airdrop sure helped. Compared to Arbitrum, the two blockchains are almost neck and neck in user interest.

Still, when it comes to total value locked (TVL), the Ethereum Mainnet reigns supreme. Roughly 80% of combined L1+L2 total value locked is on the Mainnet. It seems that for now, interest in L2 products is growing quickly but the big money remains on the L1.
This article contains links to third-party websites or other content for information purposes only (“Third-Party Sites”). The Third-Party Sites are not under the control of CoinMarketCap, and CoinMarketCap is not responsible for the content of any Third-Party Site, including without limitation any link contained in a Third-Party Site, or any changes or updates to a Third-Party Site. CoinMarketCap is providing these links to you only as a convenience, and the inclusion of any link does not imply endorsement, approval or recommendation by CoinMarketCap of the site or any association with its operators. This article is intended to be used and must be used for informational purposes only. It is important to do your own research and analysis before making any material decisions related to any of the products or services described. This article is not intended as, and shall not be construed as, financial advice. The views and opinions expressed in this article are the author’s [company’s] own and do not necessarily reflect those of CoinMarketCap.
1 person liked this article

Tech Deep Dives
A Deep Dive Into EigenLayer
Touted as one of the most novel innovation in the Ethereum ecosystem in 2023, what exactly is EigenLayer? Read on to find out.
Por Ivan Cryptoslav
5 days ago
8m
Tech Deep Dives
The Ultimate Deep Dive Into Bitcoin's Security Model
Is Bitcoin's current security model flawed? What could be done to the Bitcoin network to ensure it is sustainable? Read on to find out.
Por Ivan Cryptoslav
1 week ago
14m
Bitcoin
The Return of the $90M Blockchain Bandit
A thief using software that guessed obvious passwords robbed 10,000 crypto owners between 2015 and 2016, then disappeared. Now the stolen funds are on the move.
Por Leo Jakobson
1 week ago
2m
See all articles