CoinMarketCap and Nansen look at the latest happenings in the metaverse — from Punk6529 launching a metaverse museum district, to Epic Games and Lego Group partnering to build a metaverse. 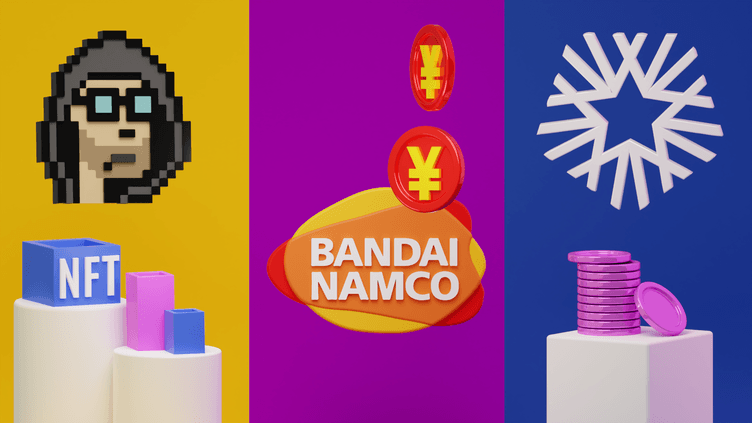 Meta has drawn the wrath of creators and fellow tech rival Apple after it announced that its users on its Horizon Worlds metaverse platform would pay nearly 50% commission to monetize their content. Meanwhile, popular NFT collector Punk6529 has launched a metaverse project hosting “the most high-end art NFTs ever displayed in one place.”

From billion-dollar fundraises to active explorations by tech giants, here are some of the hottest metaverse news over the past week.

First, a look at the overall metaverse market: Nansen’s Metaverse-20 index has been moving sideways since the start of April, with most collections in the top 10 seeing small moves to the downside over the last 7 days. The main outlier of the group, Cyber Factory 2, has seen a 27% increase in its floor price the last 7 days. The most notable NFT under that collection is the RTFKT Space Pod that was airdropped to CloneX holders.

Dubbed the “Digital Asset Fund (DAF II),” the fund will invest in crypto networks, gaming companies and decentralized finance. According to a Monday press release, the Web3 tech investment firm will deploy between $1 million and $7 million to as many as 25 companies across Europe, Asia, and North America.

Game publishing giant Ubisoft is the primary backer of the fund. Back in May 2021, White Star raised $50 million for its first crypto and blockchain fund, also supported by Ubisoft.

As per reports, White Star Capital has invested in 20 companies across seven countries since it raised its first Digital Asset Fund in 2020. Previous investments from the fund include Stacks-based DeFi protocol ALEX, decentralized exchange (DEX) ParaSwap, and Toronto-based financial services firm Ledn, among others.

The operations of the fund will be directed by Managing Partner Sep Alavi, with support from Eddie Lee and Luke Xiao in New York, Sanjay Zimmermann in Toronto, and a few others in different locations. Commenting on the latest raise, Alavi said:

"In less than two years, we've backed many of the world's most successful and promising crypto companies as they were just starting out, which is a testament to our strategy, global network, and unique domain expertise […] Through our new fund, we're looking forward to continuing to back a new generation of visionary founders building tomorrow's greatest Web3, DeFi, and Gaming companies as they unlock the new internet of value for billions of people around the world."

Although other industries are beginning to tap on the metaverse and NFT frenzy as a marketing ploy, the industry has grown primarily on the wings of art. Particularly, a new wave of artists flocked to the world of digital collectibles after Beeple sold his “First 5,000 Days” collection for $69.3 million in March 2021.

That being said, a number of NFT collectors have built an audience around their trading activities, with some even using their sizable audiences to launch new projects. Popular NFT collector “punk6529” is definitely in this category. The pseudonym collector bullishly announced the launch of a museum district with a long list of “the most high-end art NFTs ever displayed in one place.”

The collector announced the project to his 323,000 Twitter followers on Thursday. Dubbed OM, the open metaverse project is looking to attract millions of users. Punk6529 is gunning for an open platform that is built and shared by the community, with a broader vision of launching 10 self-governing cities with a maximum population of 10 million each.

From Bored Apes to CryptoPunks and ArtBlocks, visitors to the sprawling district will have access to some of the most expensive NFTs in the world.

Looking at Nansen’s wallet profiler for Punk6529’s museum address, we see that the NFTs are worth an estimated 1950 ETH (based on last 24 hours median price). With most of the value coming from reputable collections such as CryptoPunks, BAYC and Art Blocks related collections.

OM is powered by Web3 engine OnCyber, being the first step by Punk6529 to create an “Open Metaverse” where anyone can participate in the building process. The first city of the museum district launched in alpha mode on Thursday. The initial 2,000 NFTs on display belong to either the pseudonym collector or other members of the team. However, new users will soon be able to load their NFTs into the project’s galleries.

“This is the alpha version of the first district (the “6529 Museum District”) of the first city (“Genesis City”) of OM […] The 6529 Museum of Art - The museums of 6529 team members. It is my favorite visualization of NFT art to-date. I also think it may be the most high-end art NFTs ever displayed in one place,” Punk6520 tweeted.

As per announcements, the collector outlined that the project is not interested in charging fees or generating crowdfunding at this stage. For now, the main focus is on delivering a working product before proceeding to scale up via investment. Furthermore, the project is currently open to anyone for free at this stage, as long as the “ideas match” that of the museum district. In a series of Twitter threads, Punk6529 said:

“I do not want your ETH, I want your input on how to design OM. I collect in public, I invest in public and we are going to build OM in public together […] The fundamental governance model of OM is at the district level: Districts can either be "developed" or "open." 6529 is going to develop the 6529 Museum District, for example. Others can develop others. Others can be free-for-all experimental spaces.”

In terms of size, 25 buildings are already active in the museum district, with 2,000 more buildings that are yet to be activated. Punk6529 noted that “each building can host between 1 to 100 spaces, so this district type can easily host 100,000 citizens.”

Given the entry of corporate players like Meta into the metaverse space, one could argue the possibility of a truly open metaverse. However, the NFT collector pointed to already existing and seemingly decentralized concepts like HTML and TCP.

“This is not so shocking, humans have accomplished this before. There is not one human being in charge of: email, or HTML or TCP/IP or Bitcoin or ERC-721.”

OM will transition into public beta in June or July if the initial rollout turns out to be a success.

With many gaming giants jumping on the metaverse bandwagon, Japanese gaming company Bandai Namco has revealed its plans to enter into the metaverse with a ¥3 billion fund.

Bandai Namco, which is the third-largest gaming company in Japan, intends to build metaverses around its large catalog, earmarking $24 million to the cause over the next three years.

“Through the "Bandai Namco Entertainment 021 Fund", we aim to build an "IP Metaverse" and create new entertainment by combining the IP axis strategy and know-how that we have cultivated so far with the strengths of start-up companies.”

The new fund will employ three investment strategies to make its vision a reality all centered on creating and delivering entertainment to fans.

This is not the company’s first foray into the metaverse space. About two weeks ago, Bandai Namco announced its $130-million metaverse initiative that will be based on its Gundam IPs. The plan is to develop a metaverse for each of its IP. And back in February, the gaming company had said it would invest around $130 million into building a metaverse around one of its best-known Ips, Gundam.

“The new mid-term plan will introduce a new means of connecting fans to entertainment properties by building a metaverse for each IP under Bandai Namco Group’s portfolio, which is also utilized as a key part of the company’s IP based strategies […] Development will begin with the creation of the “GUNDAM Metaverse” where it will become a platform of opportunities for GUNDAM fans worldwide to come together to converse and connect in a variety of categories.”

Epic, the developer of popular game Fortnite, has raised $2 billion in a funding round from Sony and KIRKBI, the company behind the LEGO Group.

In a Monday post on its website, Epic said the fund will be used to boost its dream of building a metaverse product. Recall that Epic recently inked a deal with LEGO to build a family-friendly metaverse. Both Sony and KIRKBI will each commit $1 billion to the cause.

"This investment will accelerate our work to build the metaverse and create spaces where players can have fun with friends, brands can build creative and immersive experiences and creators can build a community and thrive."

The latest investment round pushes Epic Games to a $31.5 billion valuation.

Meanwhile, Kenichiro Yoshida, President and CEO, Sony Group Corporation, said that Epic's experience in addition to its powerful Unreal game engine "will accelerate our various efforts such as the development of new digital fan experiences in sports and our virtual production initiatives." He added:

“As a creative entertainment company, we are thrilled to invest in Epic to deepen our relationship in the metaverse field, a space where creators and users share their time.”

Meta Plans To Charge Almost 50% on Metaverse Transactions, Gets Called out by Apple for Hypocrisy

Creators hoping to monetize their works on Meta’s Horizon Worlds platform should be ready to forfeit as much as 47.5% of their gains on transaction fees.

“As part of our ongoing commitment to support creators, we’re beginning to test several new tools that will enable creators to experiment with different ways to monetize what they’re building in Horizon Worlds […] We’re beginning to roll out a test with a handful of creators that will let them sell virtual items and effects within their worlds.”

While the idea to monetize the platform is definitely a welcomed one, the planned revenue share of almost 50 percent has drawn ire from creators. Meta has been accused of hypocrisy by game developers and others like Apple who have been previously criticized for charging 30 percent on similar in-game transactions.

Apple spokesperson Fred Sainz said in an email picked up by MarketWatch:

“Meta has repeatedly taken aim at Apple for charging developers a 30% commission for in-app purchases in the App Store — and have used small businesses and creators as a scapegoat at every turn.”

He went on to elaborate:

“Now — Meta seeks to charge those same creators significantly more than any other platform. [Meta’s] announcement lays bare Meta’s hypocrisy. It goes to show that while they seek to use Apple’s platform for free, they happily take from the creators and small businesses that use their own.”

Meta might be forced to reconsider its high commission but for now, the company has brushed off the controversy. Vivek Sharma, Meta's VP of Horizon Worlds, told The Verge:

"We think it's a pretty competitive rate in the market... we believe in the other platforms being able to have their share."

Crypto News
Jealous? In This Country, You Can Now Buy McDonald's Using Bitcoin (and Many Other Things)
One Twitter user wasted little time in stressing how significant this is — describing it as “f****** huge.”
By Decentralized Dog
1yr ago
2m
Crypto News
Bitcoin Bounces Back 20% — Hours After ‘Healthy’ Correction
‘The fact Bitcoin can “crash” to $30,000 is so bullish it’s hard to overstate,’ Eric Wall told Decrypt.
By Decentralized Dog
1yr ago
5m
Crypto News
Weekly Crypto Meme Roundup, Dec. 19: NFT Blues
Whether it is the cobalt of Melania Trump’s eyes or the vivid cerulean of Crazy Frog’s exposed loins, this week on crypto Twitter was defined by NFT blues.
By Andrey Kartsev
8mo ago
6m
See all articles