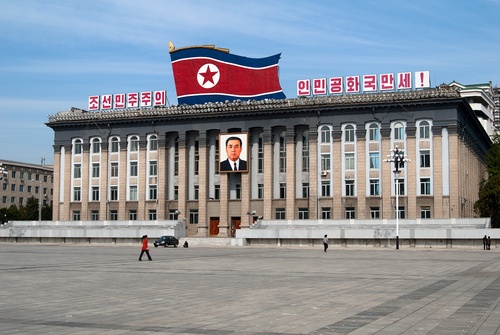 Former Ethereum developer Virgil Griffith has been found guilty of conspiracy to violate the International Emergency Economic Powers Act, which bans American citizens from exporting goods, services, or technology to North Korea without a license. The sentence was delivered on Tuesday, April 12, by U.S. District Judge Kevin Castel of the Southern District of New York and will see Griffith serve a total of 63 months in prison, in addition to a $100,000 fine. Griffith had pleaded guilty in September 2021 and was on trial for his trip to Pyongyang in April 2019, leading to his arrest in November of that year. After spending almost two years in custody, Griffith will have ten months counted as time served.
The case addressed his trip to North Korea in 2019 when Griffith traveled to a "Blockchain and Cryptocurrency Conference" in the country's capital despite failing to attain permission from U.S. authorities. Dressed in a North Korean suit, he gave presentations at the conference about the use of cryptocurrencies and how the country could employ them to dodge sanctions and launder money. Griffith also outlined how the North Koreans could use smart contracts in negotiations over nuclear weapons.

After being arrested in November 2019, Griffith pleaded guilty and followed a defense strategy that portrayed him as suffering from both Obsessive-Compulsive Personality Disorder (OCPD) and Narcissistic Personality Disorder (NPD). This was to explain his "irrational obsession" with North Korea in an attempt to lower the maximum 20-year penalty.

At the trial, Griffith's lead attorney Brian Klein reminded Judge Castel to consider factors like the harsh conditions his client experienced at the Brooklyn Metropolitan Detention Center (MDC). Griffith allegedly had to endure solitary quarantines due to COVID-19 outbreaks, limited access to blankets and warm clothing, and only two meals or less per day (peanut butter and jelly sandwiches). Klein also underscored that Griffith was "dedicated to therapy," "treatable," and "not likely to reoffend."

Griffith himself said in his closing remarks:

"I've learned my lesson. I am still profoundly embarrassed that I am here, and of what I have done."

However, that did little to earn the former Ethereum developer the judge's sympathy. He said:

"There is an argument that Virgil Griffith is a kind and thoughtful man."

But he also reminded the audience of the following:

"What you see here is an intentionality…and a desire to educate people on how to evade sanctions."

Judge Castel went on to read text messages and emails from Griffith, where he admits to sharing information with North Korea specifically to evade sanctions. A photo of Griffith presenting at the conference standing in front of a blackboard that read "No sanctions!" with a smiley face further incriminated the defendant. Castel concluded:

"The fact of the matter is Virgil Griffith…hoped to come home to Singapore or elsewhere as a crypto hero. To be admired and praised for standing up to government sanctions, for his fearlessness and nobility.

This guy is willing to play both sides of the street as long as he is the center of attention."

Crypto News
After Seven Years, Mt. Gox Victims Finally Get to Vote on Compensation Plan
The compensation plan has been delayed. And delayed again. And delayed again.
By Decentralized Dog
1yr ago
2m
Crypto News
Iconic Staples Center to Be Renamed Crypto.com Arena
The 20-year deal means the Crypto.com Arena will debut on Christmas Day, pushing the exchange's 2021's sports sponsorship deals past $1 billion.
By Leo Jakobson
10mo ago
2m
Crypto News
Weekly Roundup: What Happened in Play2Earn Games and NFTs This Week? [Feb. 17, 2022]
CoinMarketCap takes a look at some of the most prominent play-to-earn and NFT events — from the launch of OpenSea Ventures, to backlash over environment concerns of WWF's NFT sales.
By Andrey Sergeenkov
7mo ago
10m
See all articles