By The Coin Pope
2m
Created 3w ago, last updated 3w ago

Vitalik Buterin mused in a Twitter thread on the infighting in the crypto sector. Crypto exchanges are bracing for the crypto winter, as some freeze hirings and others lay off employees. 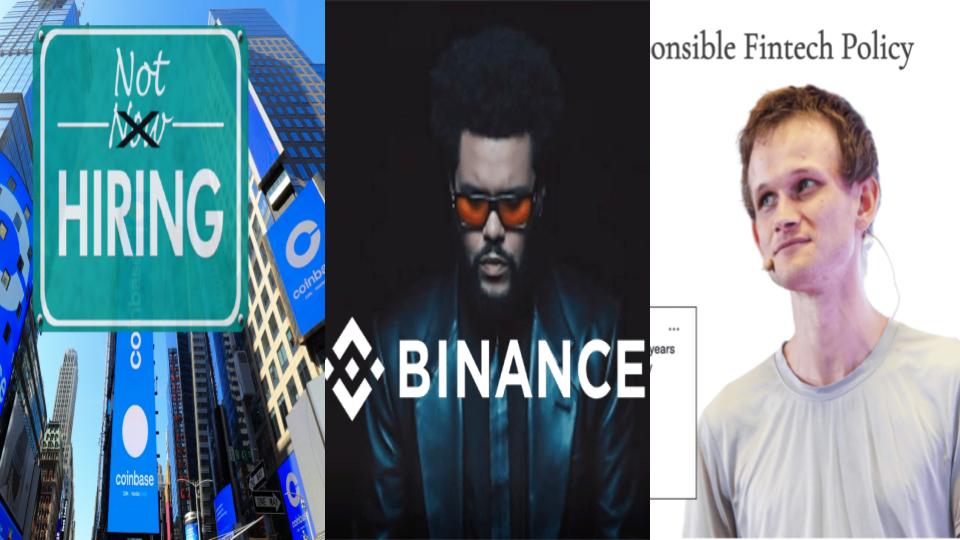 Vitalik Buterin responded to a letter by crypto critics, which asked for stricter crypto regulation, calling crypto a “disaster for financial privacy.” Buterin contemplated in his reply in a Twitter thread on why the crypto community has become so adversarial, giving several possible explanations like increased negativity through social media and crypto becoming a victim of its own success that attracts “grifters.” He called for more cooperation and cited Optimism as a positive example of a project that is not exclusively focused on pumping its token price.

El Salvador’s Finance Minister Alejandro Zelaya delayed the country’s Bitcoin bond in an interview with a local news outlet. The minister cited price volatility and uncertainty following the war in Ukraine. El Salvador originally planned to launch its bond in March 2022 but has delayed the process several times. While critics maintain that the interest is just not there, Zelaya expressed confidence in Bitcoin’s long-term prospects. El Salvador has bought 2,301 BTC to date.

Cryptocurrency exchange Coinbase announced a hiring freeze to deal with the macro environment and the crypto bear market. The exchange updated its previous plan announced in May, which initially foresaw a slower hiring process. It may have felt compelled to take more drastic measures in light of a stuttering crypto market and a $430 million loss in the first quarter of 2022.

Other crypto exchanges went a step further. Gemini announced laying off ten percent of its employees, citing the “crypto winter” as the reason for its cost-cutting measure. In South America, 2TM, the holding company behind Brazil’s biggest crypto exchange, fired 80 staff, following several Brazilian and Argentinian crypto exchanges that had taken similar steps in recent weeks.

Binance and The Weeknd Partner for Singer's World Tour 🎤

The Weeknd’s global “After Hours Til Dawn” tour will be sponsored by Binance, according to an official announcement from the cryptocurrency exchange. The partnership includes the launch of an exclusive NFT collection and will see Binance donate $2 million to a charitable cause. Moreover, five percent of the sales from an additional NFT collection will go to the United Nations World Food Programme.
This article contains links to third-party websites or other content for information purposes only (“Third-Party Sites”). The Third-Party Sites are not under the control of CoinMarketCap, and CoinMarketCap is not responsible for the content of any Third-Party Site, including without limitation any link contained in a Third-Party Site, or any changes or updates to a Third-Party Site. CoinMarketCap is providing these links to you only as a convenience, and the inclusion of any link does not imply endorsement, approval or recommendation by CoinMarketCap of the site or any association with its operators. This article is intended to be used and must be used for informational purposes only. It is important to do your own research and analysis before making any material decisions related to any of the products or services described. This article is not intended as, and shall not be construed as, financial advice. The views and opinions expressed in this article are the author’s [company’s] own and do not necessarily reflect those of CoinMarketCap. CoinMarketCap is not responsible for the success or authenticity of any project, we aim to act as a neutral informational resource for end-users.
3 people liked this article

Crypto News
Crypto News, Jan. 28: Bad News for the SHIB Army
Also today, Robinhood is unlikely to list SHIBA INU anytime soon... and it's just had a difficult set of financial results.
By Connor Sephton
4mo ago
3m
Crypto News
Why Coinbase Stock May Be Very Undervalued
Some experts believe the exchange will comfortably surpass revenue estimates given by analysts because of the volatility seen in the second half of the third quarter.
By Connor Sephton
8mo ago
3m
Crypto News
Treasury: New Rules for Brokers Only
Only crypto brokers will need to comply with $1T infrastructure bill’s IRS reporting requirements.
By Leo Jakobson
10mo ago
2m
See all articles