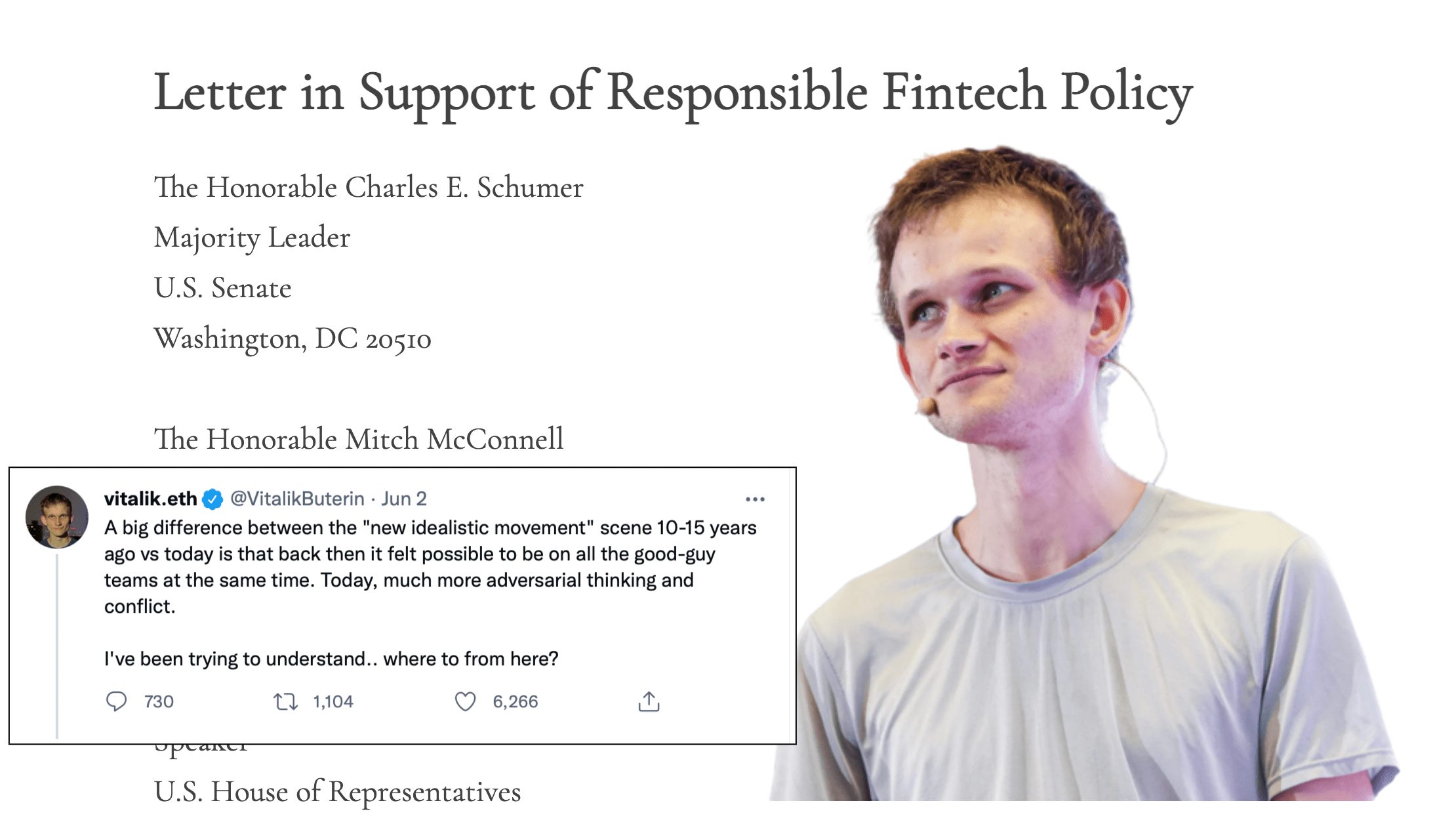 When Vitalik Buterin posts, crypto listens. The Ethereum founder has become an important — maybe even the most important — bellwether for the state of the crypto industry.

Buterin yesterday responded to the Letter In Support of Responsible Fintech Policy, written and co-signed by 26 computer scientists, software engineers, and technologists to the Financial Services Committee. The letter urges lawmakers to "take a critical, skeptical approach toward industry claims that crypto-assets (sometimes called cryptocurrencies, crypto tokens, or web3) are an innovative technology that is unreservedly good."

It takes an anti-crypto stance, calling blockchain-based financial products a "disaster for financial privacy" and saying blockchains are "poorly suited for just about every purpose currently touted as a present or potential source of public benefit."

The letter asks for a "truly responsible approach to technological innovation" and asks for investor protection (read: regulation) by lawmakers.

Buterin responded to the letter in a lengthy thread, musing on where crypto will go from here. He said the way how the crypto community has become more adversarial over the last 10 or 15 years saddens him, and was surprised to see Cory Doctorow sign the letter. Doctorow was considered a pro-crypto advocate, having delivered a keynote speech called "Decentralize, Democratize, or Die" at the 2018 DevCon.

Buterin suggested several possible explanations for why the crypto community is developing in this way. One of them may simply be that a growing community attracts undesired elements:

"This is an inevitable part of becoming bigger. In non-financial movements too, various classes of normies and often soon grifters move in over time."

Buterin also sees the spread of social media and the fear of dystopia as possible explanations but also pointed out positive, non-financial use cases of blockchain technology, like the Ethereum identity space. He concludes:

"I guess the conclusion is, peacekeeping and cooperation-seeking needs to be an explicit effort rather than peace being an assumed default."

"Optimism explicitly has goals *other* than just "make OP go up", and the only way to do that long-term is with explicit representation of non-token-holder interests."

Optimism's two-tiered approach sees the two houses share responsibilities in the governance process. Buterin has long been an advocate of crypto moving on beyond token price-fixated voting mechanisms. He notes:

Crypto News
Crypto Hacks Are 'Important Revenue' for North Korea
On Friday, it emerged that North Korea had conducted nine ballistic missile launches in January alone — and Washington claims this is the most in the country's history.
By Connor Sephton
5mo ago
2m
Crypto News
Elon Musk Vows to 'Defeat Spam Bots or Die Trying' as He Secures Financing to Take Over Twitter
The Tesla CEO also said authenticating "all real humans" is also at the top of his priorities list — and now he has the financing in place, his offer will need to be taken more seriously.
By Connor Sephton
3mo ago
2m
Crypto News
Crypto News, March 28: Bitcoin Hits $47,000, New Threat in Europe, Most Coins 'Aren't Secure'
Crypto investors in Europe could be affected by a new clampdown, El Salvador imposes a state of emergency, and Ukraine launches a virtual museum of NFTs.
By Connor Sephton
4mo ago
3m
See all articles