One of the NFTs shows Chris Rock wincing in the immediate aftermath of Will Smith's slap, along with the word "NGMI" — Crypto Twitter slang for "not gonna make it." 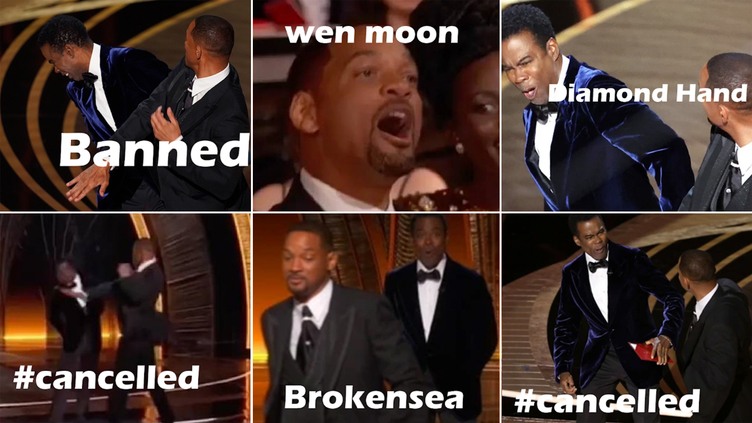 A new token devoted to Will Smith has been launched — hours after the actor slapped comedian Chris Rock at the Oscars.

Will Smith Inu — which proves that even the smallest reference to a shiba inu is mandatory in a memecoin listing — saw its value spike in the early hours of Monday morning before crashing back down.

Data from DEX Screener suggests that $WSI surged by 266% in a single hour at one point, with trading volumes hitting $770,000.

A collection of non-fungible tokens devoted to the incident has also appeared on OpenSea, which features pictures of Will Smith's slap accompanied by popular crypto slogans.

One of the NFTs shows Chris Rock wincing in the immediate aftermath of the assault, along with the word "NGMI" — Crypto Twitter slang for "not gonna make it."

A total of 2,000 "non-fungible slaps" have been listed by "Will Smith Slap DAO," which says in its bio that it has "no association to Will Smith, slaps, or DAOs."

Why Did Will Smith Slap Chris Rock?

If you were absorbed in crypto charts and Sunday night's drama completely passed you by, here's a primer.

During the Oscars, Chris Rock made a joke about Jada Pinkett Smith — Will Smith's wife — and said: "Can't wait for G.I. Jane 2."

Pinkett Smith has publicly revealed that she suffers from alopecia, a condition that causes hair loss — and in G.I. Jane, the titular character shaves her head as she goes through NAVY Seal training.

Although Will Smith initially appeared to laugh at Rock's joke, his wife — who has a shaved head — appeared visibly uncomfortable.

He then walked on to the stage and hit Rock in the face, before returning to his seat and shouting: "Get my wife's name out of your f****** mouth."

Awkwardly, Smith won the Oscar for best actor minutes later for his role in King Richard — a film that highlights how Venus and Serena Williams' father had an instrumental role in their success as tennis stars.

Although Chris Rock has declined to press charges over the slap, the Oscars has announced that it is launching a formal review into what happened — and Smith has now apologized to Rock.

The actor said his behavior was "unacceptable and inexcusable," writing in a statement:

"Jokes at my expense are a part of the job, but a joke about Jada's medical condition was too much for me to bear and I reacted emotionally."

Why You Shouldn't Buy Will Smith Inu

You may be tempted to buy Will Smith Inu following its erratic price movements — but doing so is incredibly high risk.

Tokens are now being created to commemorate anything and everything that grabs the world's attention — remember Grimacecoin, anyone? — and interest in them usually subsides quickly when a new, shinier cryptocurrency comes along.

Back in November, when Squid Game mania was at its peak, a SQUID token was launched that supposedly gave owners access to a play-to-earn game inspired by the hit Netflix show. A number of news stories breathlessly described how the token had risen in value by thousands of percent.

But as CoinMarketCap Alexandria reported, unusual tokenomics meant investors were unable to sell their SQUID — meaning they had no choice but to watch helplessly as prices surged from $4.42 to $2.861.70 before crashing to lows of $0.0007926 five minutes later.
19 people liked this article