What Are Pudgy Penguins?

What happened to the collection of 8,888 rare penguins? Is it still a potential competitor of CryptoPunks and BAYC? Let's find out! 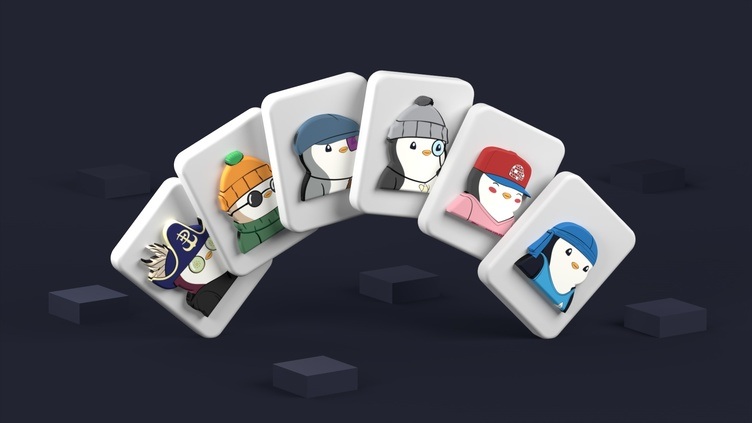 Pudgy Penguins launched on July 22, 2021. All Penguins are unique and randomly generated from over 150 hand-drawn traits. The five most rare Pudgy Penguins are not hand-drawn: they are in a banana suit, a shark costume, a pineapple suit, and a ghost costume, and one of them is facing the opposite direction of all other Penguins.

The Pudgy Penguins were created by a team of pseudonymous founders:

How Do Pudgy Penguins Work?

Pudgy Penguins is a profile picture (PFP) NFT project that got extremely popular upon its launch in July 2021. At its peak, the project exceeded an average daily sales price of 3.8 ETH, with weekly transaction volume surpassing that of premium NFT projects like CryptoPunks and BAYC. The peak of the Pudgy Penguins project coincided with the peak of the PFP trend in the NFT space.

These PFP projects are very popular because their owners often showcase the digital art purchased on their social media profiles (mostly Twitter) as avatars. PFP projects often generate up to 10,000 unique art pieces, with each character having its own variety of traits with different rarities. The rarest pieces of popular projects can fetch prices of 50 ETH or more (six figures in USD terms). The most popular PFP project is Bored Ape Yacht Club, with several A-list celebrities like Stephen Curry, Eminem, and others owning a Bored Ape PFP.

Pudgy Penguins was a PFP project that grew in the slipstream of the success of BAYC and sold out in only 20 minutes. Within only a week, the floor price of Pudgy Penguins was as high as 2.4 ETH, making it one of the most valuable NFT projects at that time.

Pudgy Penguins is a unique project because of its background story that saw it rise incredibly fast and fall from grace later due to internal problems.

Besides selling out incredibly fast, the Penguins also received a lot of attention from mainstream media outlets like the New York Times, which featured it on its front page. With the PFP trend peaking in the summer of 2021, some speculated that Pudgy Penguins may even surpass the BAYC in floor price. The hype was fueled by the team (which really only consists of a few anonymous college students), who promised airdrops, a game to be developed, and more.

With the NFT market cooling down, the project struggled with internal discontent in December 2021. One of its moderators, who goes by the username “Darth” (or @coldpizza_eth on Twitter), came forward with allegations that he was not compensated enough for the enormous amount of work put into the project. Allegedly, the team had offered him a weekly salary of less than $1,000, which Darth found inadequate and voiced his discontent over in a Twitter space. Darth also accused the project leaders of trying to bribe him and equating him to a low-skilled worker that was not worthy of higher pay.

While the team eventually managed to address the shitstorm and diffuse the bad press Pudgy Penguins had received, it was not the last negative PR of the project.

The Fall From Grace

The killer blow for the Pudgy Penguins project came with the botched NFT airdrop on Christmas Day. After airdropping a set of NFT eggs to community members, frantic trading had been underway for the reveal on Christmas Day, with many members speculating what the NFT could contain. The eventual reveal was a massive letdown, as the NFTs turned out to be lazily designed fishing rods. The community was understandably furious, and a subsequent launch of a “Lil Penguins” collection did not do much to placate them (but did fill the coffers of the project founders).
Eventually, talks between the Pudgy Penguins founders and project whale @9x9x9eth surfaced, with 9x9x9 accusing the team of trying to unload the project to cash in on the success. The team subsequently drained the treasury and withdrew all of it to their personal Coinbase accounts.

Suffice to say that this nuked the floor price of the project. It also led to an effort by the community to oust founder Cole and the team as the executives in charge of the Pudgy Penguins. There have also been several offers from legitimate and shady personas in the Crypto Twitter space to purchase the Pudgy Penguins project.

Check out the full thread here!

The latest development was an effort to wrap the NFTs and divert trading from the original project to a PenguDAO that would not reward the original founders with royalties from secondary market trading. However, Pudgy Penguins remains a contested project and an interesting case study in the successful and unsuccessful management of an NFT project.

Pudgy Penguins in the Media

At its peak, Pudgy Penguins were covered by Kevin Roose, the NYT tech columnist, in an article titled “I Joined a Penguin NFT Club Because Apparently That’s What We Do Now.”

Roose covered how he was airdropped two Penguins by one of the project’s founders, who described the motivation to launch Pudgy Penguins in the following way:

“There was huge meme potential in fat-looking penguins, so we decided to roll with that.”

Roose covered the Penguins in a fairly positive light, comparing the NFT hype to the meme-stock frenzy started by GameStop. He said:

“And while I personally wouldn’t invest my retirement money in Pudgy Penguins, I find the most common objections to them fairly unconvincing.”

He concluded that NFT trading was wasteful but eventually harmless and unknowingly predicted the eventual pain for some of the NFT holders that stay in it for too long:

“The worst you could say about community NFTs is that they’re encouraging people to overpay for what amount to digital bragging rights, and that suckers will inevitably end up holding the bag when the bubble pops. But I doubt many fans would be dissuaded by the argument.”

Tech Deep Dives
6 Key Factors to Consider When Choosing a Crypto Derivatives Exchange
Binance Futures goes through the most important things to keep in mind before you start trading crypto derivatives.
Bởi {author}
1 year ago
6m"
NFTs
Weekly Roundup: What Happened in Play2Earn Games and NFTs This Week? [Dec. 19, 2021]
CoinMarketCap takes a look at some of the most prominent play-to-earn and NFT events — from a BAYC owner selling his Ape for just $3,000, to another collector dumping CryptoPunk #4156.
Bởi {author}
7 months ago
9m"
Tech Deep Dives
What Is MetaGods? The 8-Bit Play-to-Earn Dungeon Crawler
Players take on the role of demigods like Achilles and Hercules and battle to become true gods by fighting through an array of challenging levels and clashing with powerful deities.
Bởi {author}
8 months ago
6m"
See all articles