How Do NFTs Revolutionize Hollywood and Let You Earn from Successful Movies?
Mục lục
Cinema Industry Revolution
NFTs for Merch, Tickets, and Easter Eggs
How Does Hollywood Use NFTs?
NFTs Granting Access to Box Office
NFTs

How Do NFTs Revolutionize Hollywood and Let You Earn from Successful Movies?

CoinMarketCap Alexandria takes a look at the growing-relationship between NFTs and Hollywood. Read more to find out how you can earn from successful movies! 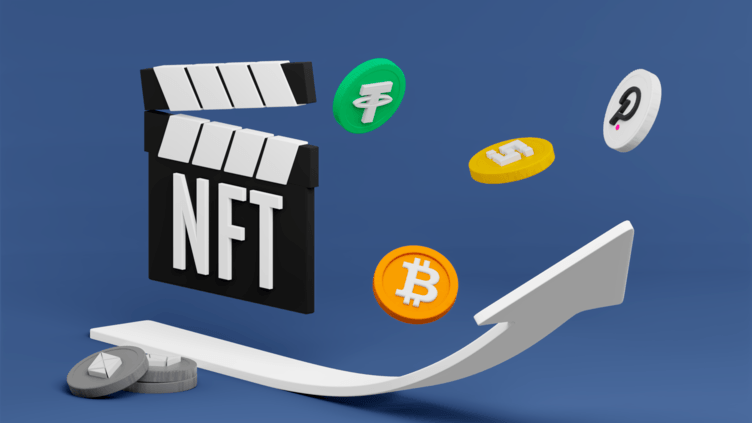 The NFT industry began its journey in the virtual art community. It provided exclusivity to digital art pieces and turned them into tokens that can be traded on the Ethereum blockchain. Since then, the industry has come a long way, peeking into many non-art sectors such as photography, meme culture, collectible cards, and even the cinema industry. Today we are going to discuss how NFTs can be used in Hollywood and how you can earn on your favorite movies by purchasing them.

The NFT industry is now making huge leaps in the film sector by offering a range of services through decentralized autonomous organizations, or DAOs. A DAO is a fully autonomous and transparent organization that runs by itself. It does not need intermediaries to process anything on behalf of its members, and all of its financial transactions are permanently recorded on a blockchain.

DAOs, combined with NFT implementation, can boost ticket and merchandise sales, potentially driving the projects towards blockbuster status in terms of performance. Moreover, it can significantly improve crowd-funding in the area.

Most recently, the ConstitutionDAO proved how fast a community could be galvanized to fund an issue by raising over $47 million in less than a week to purchase a copy of the US Constitution.

A similar project has been created within the film industry. BlockbusterDAO formed around reviving the movie-rental company Blockbuster brand as a Web3 business. Combined with streaming infrastructure that can read the blockchain at scale, there could be a revolution in funding for movies.

The incorporation of NFTs into the box office can bring forth major changes in numerous aspects of the film industry. For instance, merchandise in the form of rare NFT collectibles can become a hot topic, given that fans are already spending fortunes on superhero comic cards. Thy hype can therefore be milked by launching exclusive collectibles for popular movie characters or even movie stars.

This already proved to be successful during the most recent Spider-Man campaign. Before the release of No Way Home 86,000 NFTs were granted to those who bought their early-bird tickets.

Moreover, the mere act of purchasing tickets can be based on the ledger system. The funding for films can also expand as monetization is enhanced.

Andy Lian, chairman of crypto trading platform BigOne, offers another blockchain use case. He suggests making product placements interactive and accountable through the usage of blockchain technology and crypto. “This will bring utility to the next level. This will bring movie funding to new heights too as they are able to monetize basically every minute,” Lian adds.

The product placement can also make movies interactive as users can search for easter eggs within to unlock rewards. NFTs have already taken on the motion format, no longer restricted to the static layout of JPEGs as evident from the gifs and more recent videos being turned into NFTs.

How Does Hollywood Use NFTs?

Pre-production film financing is a bubbling area of interest for investors. Producers can easily raise money directly from fans by selling NFTs. These tokens can be staked by holders even before the movie shoots.

Forest Road Company, a US-based finance provider, announced a $20 million fund aimed to monetize film content. It plans to connect producers with fans directly via NFTs, allowing the first to get funding long before the production starts.

Another good attempt to gain leverage at the box office is NFT Studios. It was founded by Niels Juul, executive producer for The Irishman. The project aims to create the very first feature film that would be solely funded by minting NFT tokens. These NFTs might also allow access to premieres and exclusive passes such as an entrance to the movie set or peeks at behind the scenes.

Big corporations and production studios are aiming to build entire NFT-based marketplaces. Lionsgate, for instance, partnered with an NFT platform to generate franchise tokens for universes such as John Wick and Mad Max. These will serve as merchandise, directly boosting the box office royalties for the titles.

In merchandise sales, Quentin Tarantino tokenized many rare collectibles from the iconic Pulp Fiction. Thanks to the movie’s cult-like following, the first piece was sold for $1.1 million. Other leading pictures like The Matrix and Dune released merch worth millions of dollars to raise money for the production houses.

Finally, the originally HBO-aired documentary Claude Lanzmann: Spectres of the Shoah was turned into an NFT itself. The small screen saw Stoner Cats, a show that tokenized the episodes. The viewers were able to unlock them only once when a token was purchased, thus generating a total revenue of $8.4 million.

As we already mentioned, the fans will be able to buy NFTs for the film even before production. The successful box office performance can thus be a massive decider in profitability for their assets. In addition to that, the NFT owners will have access to the revenue generated from streaming services for the film.

An NFT-based community Arabian Camels made the announcement of producing a Hollywood film named Antara based on the legend of Antarah Ibn Shaddad, an Arabian Knight of ancient times. The film will have a budget of $50 million, produced under the partnership of crypto exchange Moonpay. It will pioneer in allowing people to claim rights to a film made by Hollywood.

Producer Josef Brandmaier commented on the NFT prospects of Antara, stating that “The impact that Arabian Camels will have on Hollywood is immense. This is an exciting and revolutionary move that will inject a whole new lease of life into the movie business.”

NFTs
CoinMarketCap News, June 9: Mastercard Exclusive, Musk Gets Twitter Data, Hopkins Loves NFTs
Also today, things are going from bad to worse for Terraform Labs as police scrutiny increases.
Bởi {author}
2 months ago
3m"
Crypto Basics
Who Are the Dominant Venture Capitalists in Crypto?
CoinMarketCap Alexandria takes a look at the role of venture capitalists and venture funds in crypto, and some of the top VCs in the game.
Bởi {author}
2 months ago
9m"
NFTs
Coinbase Releases First Version of NFT Marketplace — New Features and Screenshots Revealed
Beta testers for Coinbase NFT are being chosen based on their position in the waitlist. Access is going to be gradually opened, but this might take time as 2.5 million are on the list.
Bởi {author}
3 months ago
2m"
See all articles