The Beginner's Guide to Lockdrops
Содержание
What Are Lockdrops?
What Is the Difference Between Lockdrops and Airdrops?
How Do You Participate in Lockdrops?
The Three Most Popular Lockdrops in 2022
Edgeware Lockdrop
Astroport Lockdrop
Mars Protocol Lockdrop
Are Lockdrops Worth It?
Blockchain

The Beginner's Guide to Lockdrops

CoinMarketCap Alexandria explains lockdrops — how they work, why they may be better than airdrops and how you can participate in them. 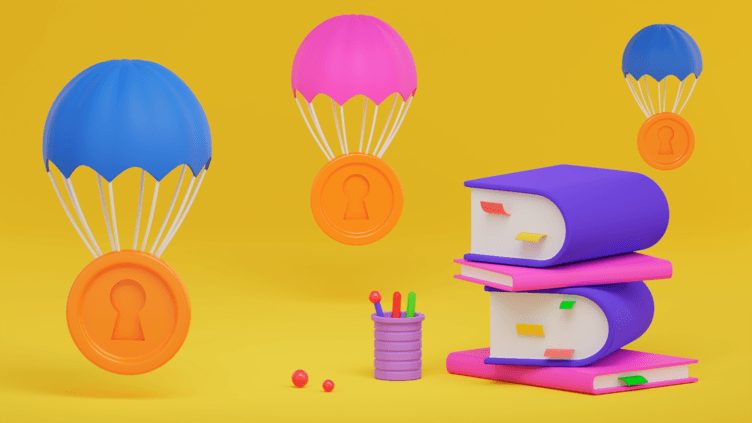 You may be familiar with airdrops, but even many crypto-savvy users have never heard of or even participated in a lockdrop.

Lockdrops are the nerdier, less popular, but more effective cousin of airdrops. This beginner's guide will explain why investors and protocols should pay more attention to lockdrops and why you could hear much more of them in the future. We will cover:

Not sure what an airdrop is? Check out our article here.

Lockdrops are modified airdrops that require some commitment from the user to receive free tokens. In a lockdrop, you stake one token for a specific time and receive your staked tokens and another token upon release. For example, you may stake ETH and receive ETH and the native token after it's released.
The duration of the staking is variable. Tokens are locked in a smart contract, and your return is determined on a pro-rata basis — the more and the longer you stake, the more you receive in return. The goal of lockdrops is to incentivize users to "put skin in the game." If users lock in some of their tokens to bootstrap network security, they will be more interested in its success.

What Is the Difference Between Lockdrops and Airdrops?

In short, this is how lockdrops and airdrops work.

Lockdrops: you lock 100 ABC tokens in a smart contract before token XYZ is released. You receive your 100 ABC tokens and some free XYZ tokens when the token XYZ launches. The longer and more ABC tokens you lock, the more XYZ tokens you receive.
Airdrops: you interact with the project by trying it on the testnet, providing liquidity, or other actions that are relevant to its use case. You receive free tokens based on those actions. You can also receive free tokens without ever having interacted with the project.
The difference is that lockdrops require a higher degree of commitment. You could receive an airdrop as a thank you for supporting the protocol, based on other tokens you hold, or by using the protocol or testnet — the monetary commitment is lower. On the other hand, for a lockdrop you have to stake your crypto with a new protocol (potentially risky) and incur an opportunity cost while it's staked.
Roughly speaking, lockdrops are more suited to building an engaged community, whereas airdrops cast a wider net in terms of marketing. The former actively incentivizes commitment while the latter can create a quick hype that can also wear off quickly. Also, airdrops often get sold quickly or even go unnoticed if the project is not high-profile.

How Do You Participate in Lockdrops?

Lockdrops have slightly different mechanisms depending on the protocol, but they all have the following steps in common:

The Three Most Popular Lockdrops in 2022

Edgeware was the first protocol to pioneer the lockdrop mechanism in 2019. It distributed 90% of its token allocation via lockdrops and only 10% went to the team. Users were able to lock ether in a dedicated "lockdrop user contract" that released the ETH collateral after three to twelve months. Users were also able to “signal” instead of locking up their ETH — which basically means they signal their intent to participate in the Edgeware network and essentially receive an airdrop. However, those users received fewer rewards and could not act as validators on the network.
From the protocol's perspective, this provided economic security and a higher degree of commitment from users. Furthermore, Edgeware maintains that its lockdrop helped achieve the protocol one of the most decentralized token distributions according to the Gini coefficient. Still, it is debatable how successful the lockdrop was compared to a regular airdrop. You can learn more about the Edgeware lockdrop in their documentation.

Astroport is a money market protocol that issued 7.5% of its token allocation via a lockdrop. In the first phase, ASTRO was airdropped to LUNA stakers. During the second phase, Terraswap liquidity providers could lock their LP tokens in Astroport to receive a share of the future ASTRO rewards. Liquidity could stay locked for up to two weeks. In the third phase, users committed their ASTRO and/or UST to the ASTRO-UST liquidity pool to bootstrap liquidity and enable price discovery.

Mars Protocol is a non-custodial lending platform on Terra. It distributed tokens with a lockdrop mechanism similar to Astroport. Users locked UST as collateral in its so-called Red Bank for 3-18 months. The longer tokens stay locked, the more boost a user receives.
After the initial seven-day participation phase, Mars Protocol ran its liquidity bootstrapping auction. Users could commit MARS and/or UST to start a MARS/UST liquidity pool and enable price discovery. After the end of this commitment phase, users' liquidity tokens were time locked for 90 days. Thus, you could utilize your MARS reward tokens despite not having access to them.

Let’s look at this question from the user’s and the protocol’s perspectives.

Users want to deploy their capital in the most profitable and least risky way. Thus, using your collateral like ETH or UST needs to outperform the yield you receive on a “risk-free” market like Curve Finance. We would need to collect much more data to establish whether that is because lockdrops have variable staking periods.
As a rule of thumb, you should participate in a protocol’s lockdrop if the protocol looks promising and you want to commit to it for the long run.
Protocols have two objectives: a more committed user base and avoiding the token dump associated with airdrops. Both are hard to assess. For instance, both Mars Protocol and Astroport have surged in price after their lockdrops closed. However, the locked collateral is yet to be released, and they benefited from a surge in the price of LUNA. Thus, it is hard to assess whether lockdrops are more effective than airdrops.
In conclusion, lockdrops are becoming more popular, with new protocols like Bastion and Retrograde launching their own versions. Our recommendation is to keep paying attention to this increasingly popular token distribution mechanism.
This article contains links to third-party websites or other content for information purposes only (“Third-Party Sites”). The Third-Party Sites are not under the control of CoinMarketCap, and CoinMarketCap is not responsible for the content of any Third-Party Site, including without limitation any link contained in a Third-Party Site, or any changes or updates to a Third-Party Site. CoinMarketCap is providing these links to you only as a convenience, and the inclusion of any link does not imply endorsement, approval or recommendation by CoinMarketCap of the site or any association with its operators. This article is intended to be used and must be used for informational purposes only. It is important to do your own research and analysis before making any material decisions related to any of the products or services described. This article is not intended as, and shall not be construed as, financial advice. The views and opinions expressed in this article are the author’s [company’s] own and do not necessarily reflect those of CoinMarketCap.
14 people liked this article

Blockchain
Explaining The FTX Collapse — Is This The End of Crypto?
CoinMarketCap Alexandria covers a full, detailed breakdown of the FTX debacle, and what lies ahead for crypto next.
Автор: Ivan Cryptoslav
2 недели назад
12м
Blockchain
The State of Crypto in Nigeria — A Special Report on Crypto Adoption Rate, CBDC and Crypto Ban.
In this special report, CoinMarketCap Alexandria venture to Nigeria — finding out how the high crypto adoption rate, 11th globally, came about and the development of the e-Naira since launch.
Автор: Ivan Cryptoslav
4 недели назад
10м
Blockchain
Musk’s Twitter Takeover Receives Helping Hand from Andreessen Horowitz
General partner Sriram Krishnan shared that he and some other “great people” are helping out at Twitter.
Автор: Ivan Cryptoslav
месяц назад
2м
Все статьи