Non-Fungible Thursdays: What Happened in NFTs This Week? [June 9, 2022]

CoinMarketCap looks at the most exciting events in the NFT space — from Kanye West filing NFT and metaverse patents despite earlier relunctance, to Nexon launching NFT games under MapleStory. 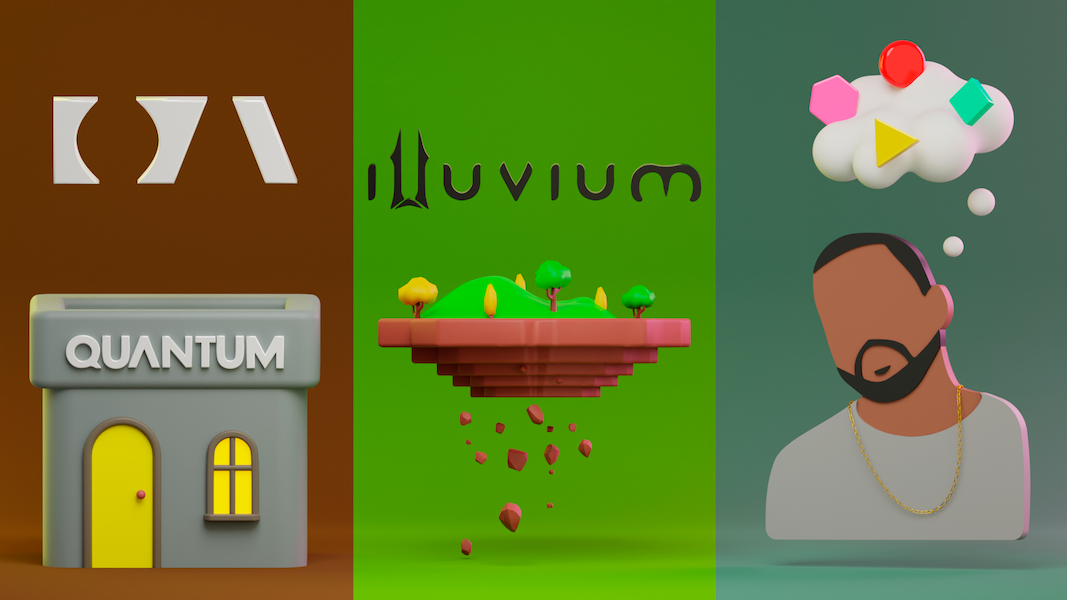 From physical NFT galleries to NFT-themed restaurants, the world of digital collectibles has continued to expand into traditional sectors. Meanwhile, rapper Kanye West, who once asked people to stop asking him about NFTs, has secretly filed several NFT and metaverse patents.

Here’s a rundown of some top non-fungible token (NFT) news over the past week.

The NFT Meta Has Shifted

During the previous run, we saw that the collections which did the best were blue chip ones such as BAYC, CloneX, Azuki and Doodles. Trading volumes hit new all time highs and these blue chips were leading the market.

However, with volumes dropping by 75% but transactions nearing all time highs, it’s clear that high end, expensive NFTs are no longer the flavor of the month. Free mints such as Goblin Town and its derivatives are stealing the show and driving most of the transactions that are happening in the market. There’s no question that the meta has shifted, the only question now is how long will this trend continue on for and what’s the next wave?

Nansen helps you stay up to date on the NFT market trends and allows you to keep an eye on what the smart NFT traders are doing. Check out this short thread from Andrew, Content Lead at Nansen, on an opportunity he found using the platform.  If you’re interested in doing your own exploring, sign up today for free!

Ethereum-based role-playing game, Illuvium, has raised over $72 million from the sales of digital land plots.

In the sale that began on Thursday and ended on Sunday, the upcoming NFT game sold nearly 20,000 digital plots to investors and prospective players. Out of the said number of plots, 29 were reserved by the dev team for future giveaways, while two Tier 5 plots will be auctioned off using a standard auction format at a later date.

The project later tweeted that about 4,018 ETH (around $7.4 million) will be redistributed to holders of the game’s ILV token that are currently staking. Furthermore, 239,388 of the game’s sILV2 tokens, valued at around $22 million, will be burned to lower the token’s total supply. "Inflation bad, deflation good," read an official release about the planned burn.

Ultimately, Illuvium will release a total of 100,000 land plots. These NFTs will give holders access to several in-game benefits, including the ability to extract fuel that can be resold to other players.

The land NFT sales tapped on Immutable X, a layer-2 scaling solution for Ethereum that allows for faster, cheaper, and more energy-efficient transactions.

Nexon To Launch NFT Games Under the MapleStory License

Nexon COO Kang Dae-Hyun revealed that the NFT-based games will be under the shared umbrella 'MapleStory Universe.'

The first title, called MapleStory N, is based on the core codes of the MapleStory but adds some elements of NFTs. Players will be able to earn in-game items that can be converted to digital collectibles and then traded with other players.

The game publisher is also releasing a sandbox-style game called MOD N. Based on the Project MOD, players will be able to create minigames using MapleStory assets. NFTs earned from playing Maple Story N, as well as non-MapleStory NFT assets can also be freely used to create custom minigames.

With NFTs being the hottest kid on the block, several notable brands have jumped into the frenzy in a bid to capture new markets. On Tuesday, the US arm of tech conglomerate Samsung announced the launch of a new Discord server to support its Web3 initiatives.

"The official Samsung US Discord server will activate on June 7 at 8:37 am ET as a virtual destination to deepen connections with consumers and cultivate a community of creators […] The Samsung US Discord server is specially designed as a fun, interactive way for fans, gamers and creators to interact and get exclusive access to products, events, non-fungible tokens (NFTs), and other Web3-based wonders," the company said in a statement.

Within 24 hours of its launch, the Discord server welcomed over 6,000 members. People that joined within the first 24 hours were rewarded with OG roles, with plans to randomly select other users for daily product giveaways between June 7 and 10.

The tech gain has been making significant efforts at entering the Web3 space. In January, Samsung Electronics America partnered with metaverse platform Decentraland. Still in January, the company announced its plans to enable NFT support on its 2022 TV lineup.

Best-known for his highly sought-after Twin Flames NFT photography collection, Aversano hopes that the physical space will encourage NFT artists to showcase their digital works. Speaking to reporters at the opening event, he said:

"Twin Flames basically gave birth to Quantum. The success of Twin Flames, the community around Twin Flames, pushed me to support other photographers […] I was able to uplift other artists with my success, which is what I love to do […] And I want to share the abundance, because that's what being an artist and a good person is about—to share the wealth."

The walls of the gallery are lined with large flat-screen televisions that display the works of several digital artists that have partnered with the startup. Photos from Aversano’s Twin Flames collection are projected onto large hanging curtains in the center of the space.

Co-founded by Aversano, Quantum Art is a photography-centric NFT platform that was launched last fall. The artist began raising funds to support his vision a while back. In February, the platform secured $7.5 million in funding, and in March, Aversano launched Quantum Keys, an NFT collection granting access to exclusive perks. Notably, holders of the NFTs can host their own events at the Quantum Space LA, in addition to the VIP areas of the NFT gallery.

According to the photographer, the Santa Monica gallery is more of an experiment. Following its success, Aversano hopes to open similar installations worldwide, starting next year. "We plan to open one a month next year," he said. "We want to have 20 to 50 spaces around the world." Each new Quantum Space location is also expected to mint its own NFT collection to ensure that each space has its own membership group.

“I'm thrilled and really interested to see how it kind of plays out, and how we could potentially change the narrative of ‘NFTs are bad’ and ‘NFTs are not eco-friendly,’' said Quantum Space LA manager and UnicornDAO’s Rebecca Lamis. “I think there's a lot of impact we can do in that capacity.”

Meanwhile, Aversano seized the Friday opening of the gallery to unveil his new NFT collection called Doppelgänger, a collection of 1,000 outtakes from Twin Flames.

Last week, the Discord server of the popular Bored Ape Yacht Club (BAYC) NFT collection was compromised, with the attacker making away with 200 ETH ($358,962) worth of NFTs. Fortunately, the BAYC quickly caught and addressed the exploit.

“Our Discord servers were briefly exploited today. The team caught and addressed it quickly. About 200 ETH worth of NFTs appear to have been impacted.”

Responding to the incident, co-founder Gordon Goner called out the popular chat app on Twitter, stating that Discord “isn’t working for Web3 communities. We need a better platform that puts security first.”

Although Yuga Labs, the company behind the NFT collection, said that it was investigating the exploit, others have said the hack was in fact the fault of BAYC Discord users and not the chat app itself.

“Don’t blame Discord for users getting socially engineered, having DMs open and clicking phishing links,” wrote analyst OKHotshot. “Use the tool correctly first before blaming it.”

Similarly, developer Cory.eth, the brain behind the NFT collection OpenAvatar, said that users “just need to use the technology better.”

The Saturday exploit is not the first time that the popular NFT collection has been hit by hackers. Last month, the collection’s official Instagram account was hacked. A phishing link was shared, allowing the malicious actors to steal a total of $2.8 million worth of collectibles from users’ wallets.
In related news, the ApeCoin DAO has voted for ApeCoin to stay on the Ethereum network. This comes after Yuga Lab’s Otherside metaverse land mint incurred millions of dollars in gas fees, prompting scaling concerns and discussions over pivoting to other chains like Avalanche. Ultimately, ApeCoin DAO voted in favor of remaining on Ethereum, barely edging out the other side with 53.62% of the votes in favor.

Popular American singer and rapper Snoop Dogg is no stranger to the Web3 space. From his collaboration with The Sandbox on his Snoopverse metaverse space to his revelation of being a prominent NFT buyer, he has continued to deepen his roots in the industry. His latest move is the launch of a new Bored Ape-themed restaurant.

Last month, a group of NFT enthusiasts and entrepreneurs banded together to launch the first eatery inspired by a Bored Ape. Now, the team behind the restaurant, Bored & Hungry, is onboarding Snoop Dogg to open its next NFT-themed eatery.

One of the interesting things about NFTs from the BAYC collection is that holders are given full commercial rights over their avatars. As a result, holders have often used their Bored Apes for products ranging from beer to apparel, movies, and even marijuana packaging.

Given the right to commercialize their NFTs, although Snoop’s Ape-themed restaurant is not an official Bored Ape restaurant from Yuga Labs, the rapper is well within his rights to use his avatar as he themes fit.

It is also worth mentioning that Snoop’s son, Cordell Broadus, is also a part of the restaurant initiative.

“Food Fighters Universe is bridging food and Web3 and blazing a trail with real-life utility for NFTs,” said Cordell, in a statement. “It’s the future of the restaurant industry, and my dad and I are thrilled to join the team and utilize their expertise to bring Dr. Bombay to life.”

Kanye West Finally Embraces NFTs and the Metaverse, Months After Ignoring Them

Back in January, rapper, producer and fashion designer Kanye West took to Instagram to caution his fans about asking him about digital collectibles. He shared an Instagram image of a handwritten note that said:

“Do not ask me to do a fucking NFT. Ask me later.”

It appears West is finally ready for the “later,” despite the apparent reticence.

The rapper is silently making plans to enter the Web3 space and last Thursday, news broke that West’s Mascotte Holdings Inc. had filed 17 trademark applications with the United States Patent and Trademark Office relating to “non-fungible assets” and “metaverse experiences.” One of the filings in particular talked about “providing an online marketplace for buyers of crypto and/digital collectibles, currencies, tokens, and assets.”

The move was discovered by trademark attorney Josh Gerben of Gerben Intellectual Property. And from all indications, the applications are centered on using the YEEZUS brand, the name of West’s 2013 album.

Filed on May 27, the applications also extend into a plethora of other products outside of the crypto space, including video games, retail stores, apparel, cosmetics, and amusement parks, amongst others. However, the applications failed to provide further details on the type of NFT and metaverse products that West has in mind.