Crypto by the Numbers

If you are wondering which blockchain made the biggest gains or how much a hacker exploited a protocol in 2021’s biggest hack, we recap 2021 by looking at the most intriguing figures. 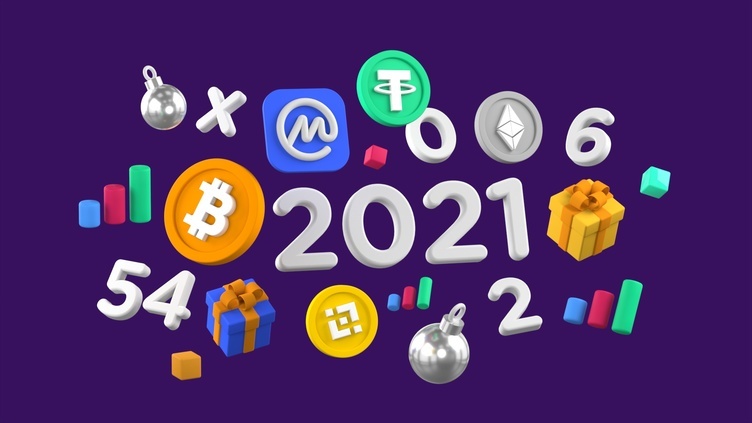 Crypto is a numbers industry. Not a day passes by that you do not get bombarded with gains, losses, TVL or some kind of other data. Easy to miss the forest for the trees this way, and not see the story behind the statistics.

That's why we at CoinMarketCap Alexandria have collected some of the most interesting numbers, dates and other statistics in our Crypto by the Numbers 2021 piece to recap this truly remarkable year for cryptocurrencies.

Lest we forget amidst a little correction in the recent weeks, Bitcoin kicked off this year around $30,000 and more than doubled its valuation to set a new all-time high at $68,530.54 in May. After a violent liquidation cascade put an end to the first part of the bull market, summer was a rather subdued period before the price rallied again to its historical all-time high of $68,780.63. Although galloping inflation had helped Bitcoin to get to this all-time high, it also proved to be a double-edged sword after a sell-off led to a 30% correction over inflation fear and tighter monetary policy on the horizon.

First of all, BTC maxis should comfort themselves with the fact that institutional crypto adoption is accelerating. The first Bitcoin Futures ETF was definitely not the last one, so prices will rise in the long term when the big boys open their big wallets. Second, Bitcoin has always been a moody lover, which is why most sellers during corrections are rightly called "weak hands."
Lastly, Bitcoin mining revenue has hit record highs this year, and with the U.S. now the leading hub for Bitcoin mining, at least that front should be rather quiet next year.

2022 may or may not be a year of subdued growth compared to 2021, but as long as Bitcoin provides the memes, we'll provide the stories.

1559: The Ethereum Improvement Proposal That Set ETH on a Deflationary Path

We could have put Ethereum's YTD growth here, but that would have been a bit too lazy. After all, the main talking point for Ethereum (and there were many) this year was EIP-1559, also known as the London hard fork.
The fork is considered an important milestone on Ethereum's road to transitioning to Ethereum 2.0, the long-awaited "scaled version" of the network. Those of us too young to remember the first half of the year recall that one of the main narratives of EIP-1559 was "smoothing" gas fees. After gas got out of control in the first months of the year (we'll get to that in a second), EIP-1559 was purported as a "betterment," albeit not a complete solution to the state of affairs on the network.
More importantly, though, Ethereum issuance turned deflationary at times, as the burned Ether in transactions outpaced miners' newly supplied Ether. That played a big role in the network's outperformance of Bitcoin this year, reaching ETH/BTC levels not seen since 2017. Ethereum bulls claim this will set the network on its path to "ultrasound money" in the future, but it will also mean that almost all DApps will have to move to scaling solutions.

373.8: Highest Fee Recorded on Ethereum in Gwei on February 23

Are gas fees now "more stable" as was promised by EIP-1559?
Uhm, stable at a high level, if you want to say so. Zhu Su, one of the biggest and most influential investors in the crypto space, is less than impressed by the ongoing problems with network congestion. Although EIP-1559 implemented the base fee and "miner tip" as a change to transaction fees, in practice not much has changed, and gas prices still shoot up violently, especially during times of NFT launches.
Though it may not console Ethereum users too much, at least in that regard Ethereum did not set an all-time high this year:

Switching gears to alternative layer-one blockchains, and Solana takes the cake here. Although it was not even the best-performing alternative layer-one — check our altcoins in 2021 review for that — it takes the cake for having the ballsiest cheerleader that is willing to stand up for it and put his money where his mouth is:
Dubbed the "fastest blockchain in the world," Solana has since retraced a bit over another distributed denial of service attack, not the only one it suffered this year. However, many see Solana continuing on its growth path in 2022, as it's well-suited to accommodate blockchain games and NFTs thanks to its speed and minuscule fees.
Currently, Solana sits fifth in terms of market capitalization, although it did briefly flip BNB for third place when trading around all-time highs. With a powerhouse like Sam Bankman-Fried in its corner, you certainly would not want to bet against Solana.

NFTs? NFTs…there was something about those, too, wasn't there?

It would have taken an even braver man to predict that someone would become a multi-millionaire with a digital painting, and that said painting would be the third-most-expensive art piece ever auctioned. That's exactly what happened in March and it's really only part of the story that NFTs wrote this year. In fact, NFTs were undoubtedly the hottest sh*t in 2021, so we dedicated an entire piece to them in our NFTs in 2021 article.

Back to Beeple. Mike Winkelmann, the artist behind the pseudonym, painted a digital picture each day for 13 and a half years. In January this year, a collage of his work was to go be auctioned, and boy, auctioned it surely was! Bidding on the piece started at $100 (!!) until it was sold 353 bids later.

According to a report, Sotheby's netted a cool $100 million in NFT auctions this year, including a collection of Bored Apes that sold for $24 million, so you can assume those guys will not want to stop any time soon.

Ahh, dogcoins, the unsung heroes of retail investors' bags. Ok, not that unsung after this year, which has seen the emergence of not only meme coins and meme stocks, but kicked off its own little niche within this strange world: dogcoins.
Dogecoin started it all by surging to an all-time high of $0.74 in May, after Elon Musk, its unofficial Chief Meme Officer responsible for its rise, unleashed a flurry of tweets in the first half of the year:
That took Dogecoin to number four in market capitalization, briefly overtaking XRP (yes, XRP was worth that much at some point in 2021) before its inevitable brutal crash over the last few months. In all fairness, Elon wasn't the only one pumping the price, with others like Snoop Dogg boarding the hype train while it was still hot. Although Elon said it was all fun and games tweeting about Dogecoin, Bitcoin investors found his market-making power less funny when Tesla withdrew its support for BTC.

Which brings us once again back to Bitcoin.

Bitcoin and China have a curious relationship. Like an on again, off again long-term lover, China repeatedly seems to "break up" with Bitcoin, but can never let go completely. And even though markets react in a knee-jerk fashion with a short-term sell-off every time, they just as reliably bounce back and surge after every "China Bitcoin ban."

According to our count, China has now "banned Bitcoin" a whopping 19 times in total. Four of these "bans" occurred in 2021, with the most significant being the crackdown on Chinese crypto mining. Another one followed in the fall when China declared Bitcoin transactions illegal.

Crypto Twitter has developed a humorous relationship to "China banning Bitcoin" at this point:

However, with mining and transactions officially declared illegal, China has given itself little room to maneuver when it comes to "banning" Bitcoin. Who knows if we'll ever get to two dozen "China bans."

9/7/2021: The Date When El Salvador Made Bitcoin Legal Tender

Bitcoin maxis had more reason to celebrate than just price appreciation in 2021. El Salvador became the first country to declare the world's biggest cryptocurrency legal tender after its President Nayib Bukele announced such plans in May at a Bitcoin conference in Miami.
The Latin American country has since become a darling of Bitcoin investors on Twitter, even though its own population seems far less convinced of the policy's viability. President Bukele has repeatedly doubled down since, buying the dip more than once.
He also has plans for a bombastic Bitcoin City in El Salvador, although environmentalists are not so sure whether this is a good idea. In fact, despite being popular among Bitcoin maxis, President Bukele has also made a remarkable amount of "enemies" by adopting Bitcoin as legal tender. Among them: the Bank of England and Vitalik Buterin (this list is far from non-exhaustive).

It remains to be seen where this undoubtedly fascinating experiment will go.

$612 Million: The Amount Stolen in the Poly Network Hack (Almost All of it Returned, Too!)

Hacks are a dime a dozen in the crypto world. Some protocols, like Cream Finance, even seem to make some sort of perverse game of chicken out of it by giving hackers the opportunity to attack them repeatedly.
Poly Network takes the cake, though, for the largest and most astonishing hack in 2021. After getting hacked for a vault-emptying $612 million, the hacker started communicating with the community on Twitter, explaining how he did it and why. He also called on the Poly Network team to get in touch with him and negotiate, which they did. Lo and behold, almost the entire sum was returned, with the hacker even being offered a job at the protocol as chief security officer! (he reportedly declined)

Although that was the biggest hack of the year, it was not the biggest all-time hack. You can check that in our Largest Crypto Hacks in History.

To cap it off, let's look at something we all need, for better or worse: a way to earn our bread.

And crypto seems to be a pretty good way to do so, and an in-demand one as well. How else to interpret data from cryptocurrencyjobs.co, announcing that crypto-related job listings have grown by 1,500% this year? The industry is booming and there probably has never been a better time than now to get involved in crypto. We’ve already looked at how the crypto boom is contributing to the job market, and with increasing mainstream adoption almost weekly, getting a crypto job early is probably even more important than investing in crypto.
However, if you decide that slaving away at a 9-to-5 is not for you, you can always try yourself at mining cryptocurrencies. Even powerful heads of state like Belarusian President Alexander Lukashenko recommend it.

We could have, of course, added many more interesting facts and figures, but you got an idea of the main narratives in the crypto space in 2021. If you liked this piece, stay tuned for more as we continue with predictions for crypto in the coming days.

Crypto News
'Enraged': John McAfee's Wife Says She Learned of His Death 'Via a DM on Twitter'
Janice McAfee also doubled down on her assertion that her husband didn't kill himself in prison.
Por Connor Sephton
11 months ago
2m
Crypto News
Weekly Wrap: What's Happening in the Metaverse This Week? [May 23, 2022]
CoinMarketCap and Nansen look at the latest happenings in the metaverse — from the first metaverse wedding in UAE held on Decentraland, to Sony outlining ambitious plans for the metaverse.
Por Andrey Sergeenkov
1 month ago
9m
Crypto News
CoinMarketCap News, May 24: Terra is Being Rebuilt... But is Investing a Bad Idea?
Also today, crypto dominates discussion at the World Economic Forum in Davos.
Por Connor Sephton
1 month ago
4m
See all articles