Crypto During a Crisis - How Is Bitcoin Helping Ukraine?
Daftar Isi
How Is Bitcoin Currently Being Used in Ukraine?
Unprecedented Donations Offered in Crypto
The Market Reaction
The Ultimate Choice
Crypto Basics

Crypto During a Crisis - How Is Bitcoin Helping Ukraine?

After thirteen years, is Bitcoin finally demonstrating its best use case during dramatic events? Find out how Bitcoin and cryptocurrencies are currently being beneficial to Ukraine. 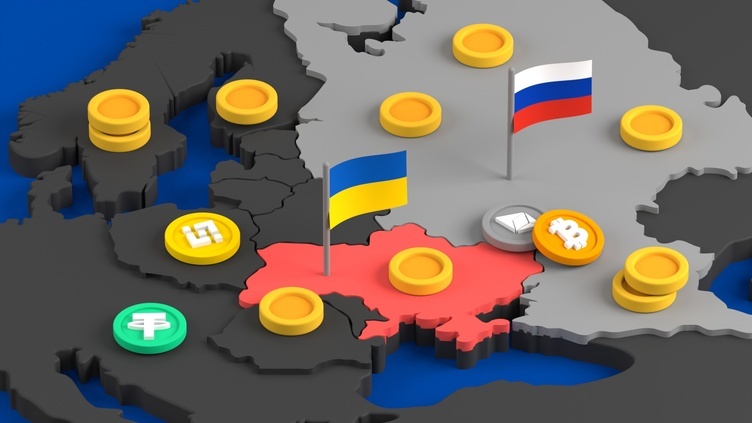 On Feb. 17, the Ukrainian parliament finally passed a law that legalizes Bitcoin and other cryptocurrencies. They became recognized as legitimate payments and a vehicle to boost the industry’s business development in the country.
The regulation does not imply that Bitcoin is to be considered legal tender like in the case of El Salvador, but it is rather accepted legally as a payment method.
The law was first drafted in September last year, but it had been put on hold because other matters had become more urgent, and creating a new regulatory authority, specifically for Bitcoin and cryptocurrency was not affordable for the country at that time.

The recent legislation could not come at a more appropriate time. Since the start of the conflict and international crisis last week, Bitcoin and other cryptocurrencies have become a strong support for the Ukrainian government and its people.

How Is Bitcoin Currently Being Used in Ukraine?

Ukraine has always been a front runner on Bitcoin and cryptocurrency usage. According to the New York Times, the country was already the world’s crypto capital before the legislation was enacted, processing more transactions in Bitcoin than its currency, the Hryvnia.
The confirmation of such a high volume of Bitcoin transactions was materialized a few days ago with the publication of BTC, ETH, and USDT addresses by the Ukrainian government, NGOs, and various volunteer groups across social media channels. They asked donations to be directed at those addresses to support the population and the military at this difficult time.
The addresses were widely shared by organizations and political leaders on social media, including Vice Prime Minister and Minister of Digital Transformation of Ukraine, Mykhailo Fedorov. They belong to a wallet set up on behalf of the government by the Ukrainian crypto exchange, Kuna.

The exchange founder declared the funds were going to be delivered to the people who were being evacuated and required basic needs. Also, petrol, food, and water were provided for the military personnel on the front line.

At the time of writing, the BTC Ukraine donation address recorded 8,407 transactions for a total of 187.89527235 BTC received (approx. $8.3M), while the ETH address recorded a total of 8,959 transactions of donations received for a balance of 2,453 ETH (approx. $7.5M). USDT accounts for a total of 5,488 transactions on the Tron blockchain.
Such cryptocurrency crowdfunding is unprecedented and still undergoing. Blockchain analytics firm Elliptic reported that as much as “$24.6 million were raised through more than 26,000 crypto asset donations since the start of the crisis. One NGO received a single Bitcoin donation worth $3 million.” The crypto assets even included a number of NFTs on top of the above-mentioned cryptos.
Recurring to such instruments in times of trouble means the cryptocurrencies are offering the best value-added use case they were designed for, providing a secure, unconfiscatable, and censorship-resistant tool to the people deprived of their primary means and their savings.

They enable fast, cross-border donations, bypassing third-party financial institutions that might block payments. Using cryptocurrencies is not the most straightforward operation and learning how to transact digital assets at the time of crisis might be more time-consuming and burdensome than ever, also due to the inevitable little reliability on the internet connection.

However, considering that the country has already been a notable user of cryptocurrencies, more people than we think might ultimately resort to them.

In the last few days, Bitcoin and the whole market have experienced a nice price surge – supported by soaring Russian and Ukrainian trade volumes – which has encouraged the local users to direct their money and savings to digital assets with no regrets.

Bitcoin has proved to be more convenient as a store of value than gold which has recorded very little increase in the seven days of the crisis, of about 1%, in contrast to Bitcoin’s surge of 16%.

Converting money into crypto is surely a better choice than storing value in the Ukrainian currency, while the country’s economy collapses under the new political situation.

On Feb. 24, the Ukrainian government imposed martial law, and banks had to suspend electronic cash transfers and digital payments through channels like Paypal and Venmo.

ATMs were soon assaulted by citizens trying to withdraw the money to pay for essential living goods or even leave the country.

Under this dramatic scenario, Ukrainians are primarily turning to Bitcoin and stablecoins to survive as it becomes the only money they can choose and trust. It helps people maintain control over their wealth during this difficult time by simply holding on to a USB drive, or a smartphone wallet, while securely storing their private key.
Demand in Ukraine has been so high in the last few days that USDT (Tether), which is pegged to the US dollar, actually broke its peg and traded at times above the dollar at $1.10.

Instead of leaving the country with no money in cash form, refugees can get through borders with cryptocurrencies without asking anyone’s permission. Even if the host country’s exchange and ATMs accounts are not easy to set up, cryptocurrencies offer users multiple options, including P2P transfers and making direct payments in shops and retailers who accept crypto.

It’s not easy to predict what the future holds for Bitcoin and if its valuable use case is confirmed by future events. At present, those who have supported the new monetary system are appreciating its outcome, and maybe, for the first time in history, people holding tight to their own savings and financial tools during a crisis is not a utopian condition anymore.

Crypto Basics
Centralized Exchange (CEX) vs Decentralized Exchange (DEX): Where Should I Trade?
This week, CMC Academy explains the difference between centralized and decentralized exchanges for crypto traders with pros and cons.
Oleh CryptoJelleNL
1 month ago
5m
Crypto Basics
“Bitcoin Is a Bubble, Has No Value, Will Disappear” — And 20 Other Examples of How They Tried to ...
Bitcoin has been declared "dead" and a "bubble" for years — let's see what prices in Bitcoin's history made people think that the biggest crypto was on its way out.
Oleh Andrey Sergeenkov
1 year ago
7m
Crypto Basics
What Is an ICO?
ICOs were all the rage back in 2017 — what do you need to know about this method of fundraising, and how can you protect yourself against bad actors?
Oleh Decentralized Dog
2 years ago
5m
See all articles