On Nayib Bukele's Twitter — followed by 3.8 million people — Bitcoin memes and laser eyes have been replaced by photographs of handcuffed gang members. 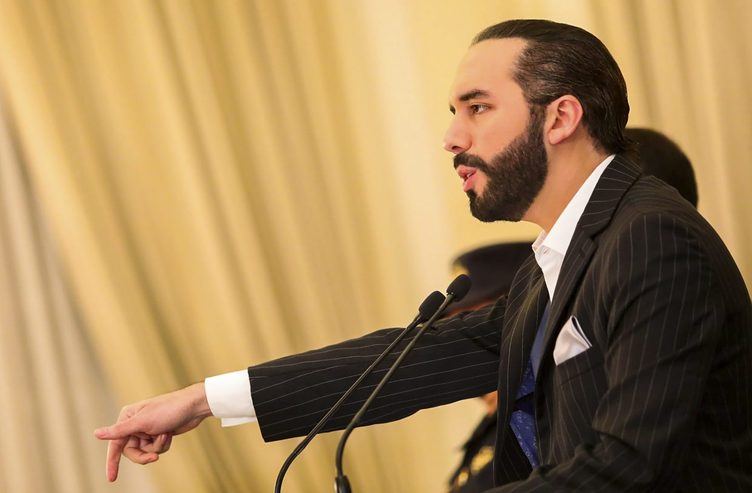 Until recently, President Nayib Bukele's Twitter account was filled with endorsements for Bitcoin — along with attacks on those who dared to criticize El Salvador's decision to make BTC legal tender.

But since being confronted with a spike in gang-related killings last month, Bukele's attention has been diverted to clamping down on the violence that's ravaging the Central American nation.

A "state of exception" was declared in the country, with some claiming these measures limit the rights of everyday Salvadorans significantly.

Now, President Bukele has confirmed that he wants this regime to be extended for another 30 days as he attempts to stamp out gangs including MS-13 and Barrio 18.

On his Twitter — followed by 3.8 million people — Bitcoin memes and laser eyes have been replaced by photographs of handcuffed gang members.

Bukele also mocked one alleged gang member who had used make-up in an attempt to conceal the tattoos on his face.

No homicides were reported in El Salvador on Saturday — and according to the president, more than 16,000 "terrorists" have now been arrested over the past 29 days.

While polls have suggested most Salvadoran citizens support Bukele's approach to tackling gangs, some human rights groups have claimed that these laws "put all Salvadorans at risk" — and mean completely innocent individuals risk being detained for no reason.

Speaking to Al Jazeera, Human Rights Watch research Juan Pappier said there had been dozens of cases where police had entered poor neighborhoods with a known gang presence — rounding up young men and sending them to prison.

The report also cited data from the Prison Policy Initiative that reveals El Salvador has the second-highest incarceration rate in the world, with the U.S. in first place.

El Salvador has regularly been championed as a forward-thinking country by Bitcoiners after elevating BTC to the same status as the U.S. dollar.

But the country's restriction of everyday freedoms, and reports of arbitrary arrests, may raise uncomfortable questions for crypto enthusiasts.

Bukele was due to attend the Bitcoin 2022 conference in Miami earlier this month — celebrating seven months since the controversial Bitcoin Law came into force.

But a day before the main conference was due to begin, the president announced he was making the "hard decision" of canceling his trip "due to unforeseen circumstances in my home country."

Last week, a former finance minister in El Salvador suggested that Bukele's Bitcoin bonds are being delayed because there's a lack of interest among investors.

Carlos Acevedo, who used to be president of the country's central bank, said:

"First they said that in January, then in March, then they said that the Digital Assets Law was not ready, then that pensions were a priority, now the issue of security; I believe that the government has realized that there is not enough interest in the markets."

Crypto News
Microsoft Asks Xbox Users Whether They Want Option to Pay with Bitcoin
It is worth noting that Microsoft has allowed Bitcoin to be used before… kind of.
Por {{autor}}
1 year ago
2m
Crypto News
Bitcoin Price: Here's What Analysts Are Saying After the Sudden Surge to $20,700
"It would not be surprising to see other coins follow in BTC’s footsteps and for this upward trajectory to be sustained into 2021.”
Por {{autor}}
1 year ago
5m
Crypto News
Bitcoin News: Chivo Wallet Use Has Plummeted in El Salvador, Report Claims
El Salvador adopted Bitcoin as legal tender back in September 2021 — eight months on, it's claimed just 20% of businesses accept BTC as a payment method.
Por {{autor}}
3 months ago
3m
See all articles