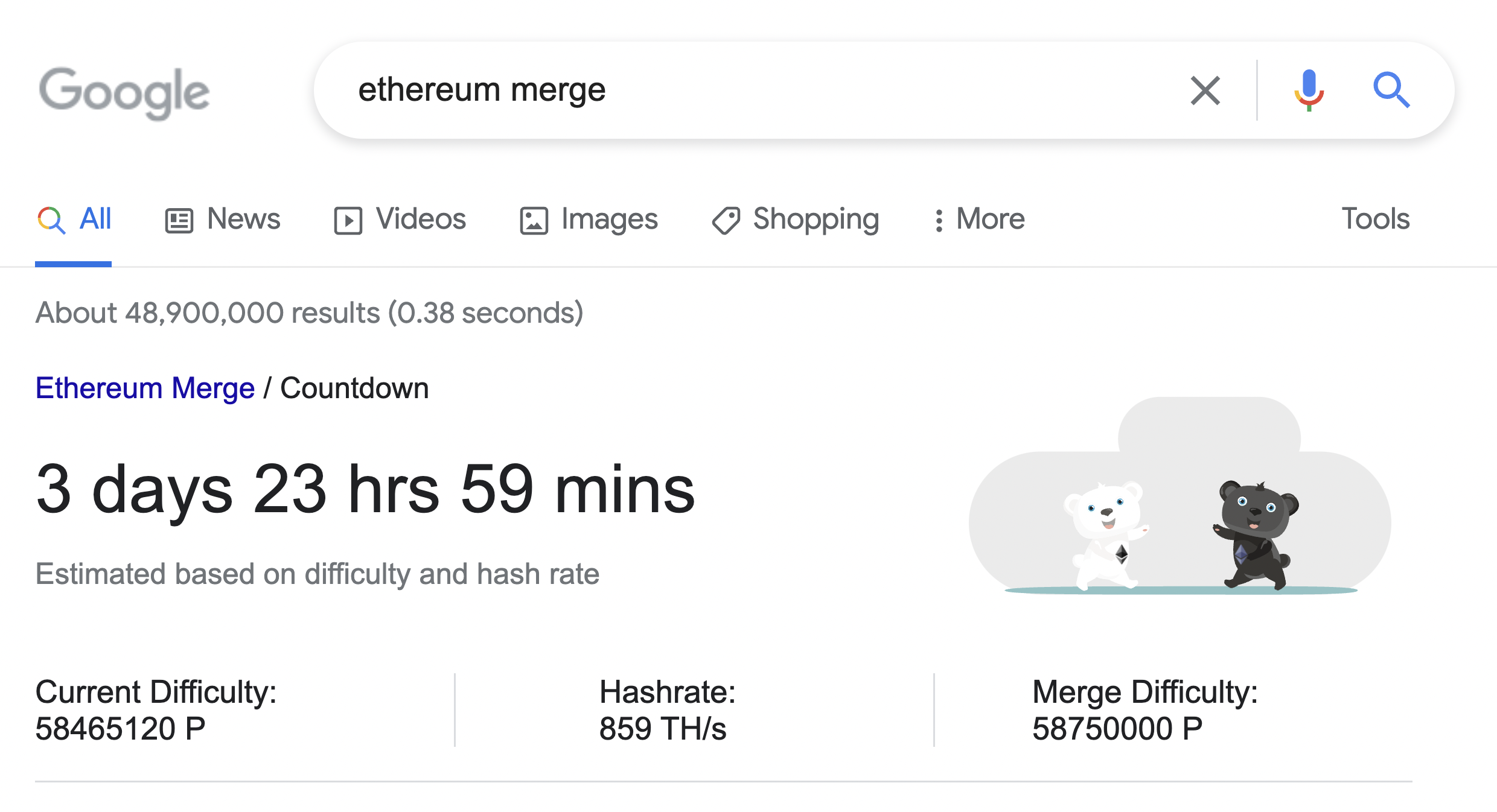 Google has added a countdown clock for The Merge to search results, as Ethereum's much-anticipated switch to a Proof-of-Stake blockchain nears.

All of this comes as the number of global searches for "Ethereum Merge" hits an all-time high — with Singapore, Luxembourg, Cyprus, China and Switzerland driving the most traffic.

Google's countdown clock shows two bears, wearing Ethereum necklaces, running toward each other for a hug — illustrating plans for the Proof-of-Work and Proof-of-Stake chains to unite.

Estimates based on difficulty and hash rate indicate that The Merge will be finalized on Thursday morning, but it's impossible to provide a precise time.

ETH's price has risen by 14% in the past week — hitting $1,764 at the time of writing — prompting some analysts to speculate that The Merge may have been priced in already.

In crypto's history, there have been countless "buy the rumor, sell the news" events that led to sharp selloffs following big milestones.

A series of dress rehearsals have been taking place in recent weeks, and a final shadow fork was successfully deployed on Friday without any issues emerging.

It's hoped Proof-of-Stake will pave the way for lower gas fees and greater levels of scalability, ensuring that transactions are both cheaper and faster in the future.

Figures from the Ethereum Foundation have previously suggested that PoS could also reduce energy consumption by a whopping 99.95%.

The environmental impact of Proof-of-Work has long been criticized, and Ethereum's newfound eco-friendly credentials could entice institutional investors and businesses.

In other developments, Vitalik Buterin has made a surprise appearance at the Kyiv Tech Summit in Ukraine — maintaining a low profile because of security concerns.

The Web3 hackathon aimed to use "the power of technology to solve real on-the-ground issues in Ukraine" — six months after Russia's invasion began.

Warning that the current situation has become dire for millions of Ukrainians, the event said:

"Outside of the humanitarian crisis and military needs required by Ukraine, there is an unprecedented need for new tools and solutions to systematically respond to the new reality of war."

The Kyiv Tech Summit said Buterin wanted to "provide his support to hackers on the ground floor building the humanitarian tools of tomorrow" — and tweeted a picture of Ethereum's co-founder speaking to attendees.

He joined minister Alex Bornyakov for a panel discussing the future of Web3 in Ukraine — and Buterin was quoted by CoinDesk as saying that he wanted to let the country know "that lots of people in the blockchain, Ethereum and crypto world really care about you guys."

Crypto News
CoinMarketCap News, Feb 3: Doge's Couch Up for Auction... But Bids Aren't Accepted in DOGE
Also today, a top rapper is going to headline a virtual Super Bowl concert in the metaverse.
By Connor Sephton
22h ago
3m
Crypto News
Podcast: Warren Buffett's Right-Hand Man Rips Into Crypto in Newspaper Article
Also today, want to buy the couch that Doge sat on in THAT picture? Now you can.
By Connor Sephton
22h ago
1m
NFTs
Mastercard's NFT Lead Quits — and Accuses Company of Harassment
Satvik Sethi has minted his resignation letter as an NFT — and has claimed that, at times, he had to "beg across the hierarchy" to get his salary.
By Connor Sephton
1d ago
2m
See all articles