Opera wants to "seamlessly onboard millions of users to Web3" in an environmentally conscious way — and embracing multiple networks helps to ensure that it remains "chain agnostic." 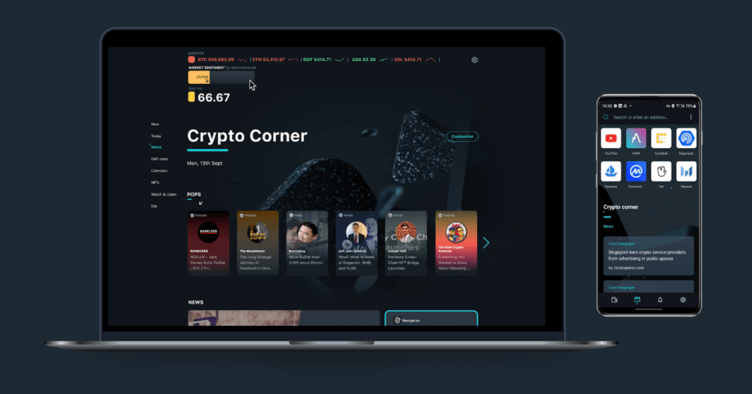 The crypto-friendly web browser Opera has announced that it is integrating eight major blockchain ecosystems — meaning tens of millions of users will find it easier to access decentralized applications.

Bitcoin, Solana, Ethereum and Polygon are among the networks that are now supported. It's also hoped a focus on Proof-of-Stake blockchains will mean users can enjoy "lower fees and faster transactions while minimizing their carbon footprint and still leveraging Ethereum's robust decentralization and security."

Opera has said that it wants to "seamlessly onboard millions of users to Web3" in an environmentally conscious way — and embracing multiple networks helps to ensure that it remains "chain agnostic."

The company's EVP for mobile, Jorgen Arnesen, says Opera has been securing partnerships with "cutting-edge" blockchain platforms and Web3 domain name providers for the past four years as part of a quest to accelerate crypto "from proof of concept towards mass adoption," adding:

"Ultimately, Web3 is on its way to becoming a mainstream web technology and users won't need to know they're interacting with it. They need to get a superior user experience and a true benefit."

This touches on something that's crucial for Web3 and crypto projects to achieve — ease of use. Many platforms have ended up offering a rather clunky and unintuitive experience for users who are accustomed to straight–forward designs in the Web2 world.

Opera singled out the integration of Polygon, which offers an antidote to "unsustainable" gas fees on the Ethereum mainnet, all while reducing the amount of electricity it takes to complete a transaction by 90%. Its announcement says the carbon footprint of minting an NFT on Polygon is equivalent to driving around 250 meters.

Pointing out how Polygon offers more than 7,000 dApps, the company said this will make it easier for users to access popular metaverses such as The Sandbox and Decentraland, as well as play-to-earn games.

Awkwardly, Opera's news release also mentions its support for the Ronin blockchain — home to the play-to-earn game Axie Infinity — describing it as "one of the runaway successes of the decentralized gaming space." Hours earlier, it was confirmed that crypto worth $614 million was stolen from Ronin in the biggest hack that the industry had ever seen.

Acknowledging that the worlds of Web3 and crypto can be a steep learning curve, Arnesen added:

"The average web user may still be hesitant to dabble with Web3, but with the integration of Solana, Polygon, and others in our mobile browser, they can now access these technologies from the safety and familiarity of the browser that provides them with a dedicated Web3 experience."

While Polygon and its array of dApps are already available through Opera's Crypto Browser Project, it may be a few months before other blockchain ecosystems make their debut. In the meantime, they can be accessed through Opera's browser for Android smartphones.

The Crypto Browser Project was unveiled back in January — with beta versions released for PCs, Macs and smartphones — as part of a push to "deliver a new web experience with Web3 at its core."

While Opera has offered an integrated crypto wallet since 2018, the company argued that a new, dedicated browser needed to be created to usher in the next era of the internet, writing in a blog post:

"Too few of the web browsing experiences offered today have been built with the intention of putting Web3 center stage and making blockchain technologies understandable and easy to use."

Opera's browser includes a native non-custodial crypto wallet that allows digital assets to be accessed directly without having to install extensions — and security is also enhanced through a clipboard that prevents addresses from being modified by malicious actors.

Crypto News
Elon Musk is Now Called 'Mr. Tweet' on Twitter... and Can't Change it Back
The Tesla founder and Twitter owner's name change comes as the social media giant launches a major brand safety campaign for skittish advertisers.
By Leo Jakobson
3h ago
2m
Crypto News
Robinhood Social Media Hacked to Tout a Fake Cryptocurrency Launch
A hacker took over trading app Robinhood's Twitter, Instagram, and Facebook accounts for a scam that netted less than $8,000.
By Leo Jakobson
3h ago
2m
NFTs
Gemini-Owned Nifty Gateway's Founders Head for Exit Amid Crypto Crisis
The Cock Foster twins are leaving the NFT marketplace they sold to Gemini in 2019, planning to take a break and then 'brainstorm' their next startup.
By Leo Jakobson
3h ago
2m
See all articles