OpenSea Discord Hacked: Users Warned NOT to Click on Any Links After YouTube Scam
Table of Contents
Yet Another Incident
Crypto News

By Connor Sephton
2m
1w ago

A suspicious link was included that directed unsuspecting Discord users to a website for the "YouTube Genesis Mint Pass." 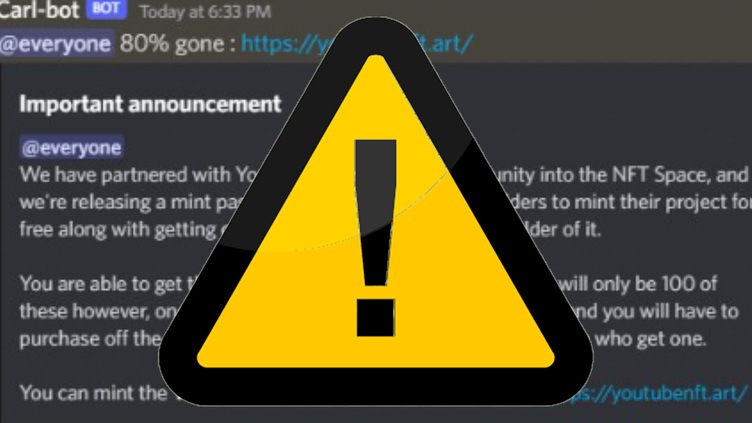 OpenSea's Discord channel has been hacked — with the NFT marketplace warning users to avoid clicking on any links.

It comes after a bot posted a message that falsely claimed OpenSea has entered into a partnership with YouTube "to bring their community into the NFT space."

The scam suggested that OpenSea was releasing a pass that would allow holders to mint NFTs for free — along with other "insane utilities" — and the message continued:

"You are able to get this mint pass below for 100% free. There will only be 100 of these however, once they are gone they won't be coming back and you will have to purchase off the OpenSea marketplace. Congratulations to those who get one."

A suspicious link was then included that directed unsuspecting Discord users to a website for the "YouTube Genesis Mint Pass."

Screenshots suggest bots were trying to pile pressure on Discord users to click on the link by inducing a fear of missing out — with one post indicating that the passes were "80% gone."

On Twitter, OpenSea initially said there was a "potential vulnerability" in its Discord channel — and later confirmed it was investigating the situation.

Worryingly, there are signs that over a dozen wallets have been compromised — with one person losing an NFT worth $9,000.

This isn't the first time that a Discord channel has been targeted in this way.

Last month, a malicious actor managed to make their way into Bored Ape Yacht Club's Discord server, which is meant to be exclusively available to those who own NFTs from the collection.

When inside, they posted a phishing link and successfully stole a Mutant Ape NFT from an unsuspecting user.

"A webhook in our Discord was briefly compromised. We caught it immediately but please know: we are not doing any April Fools stealth mints / airdrops etc. Other Discords are also being attacked right now."

Crypto News
Let's Teach Bitcoin in Schools, NYC's New Mayor Says
Eric Adams says a number of young people have stopped him on the street to ask what Bitcoin is — and jokingly argued that explaining crypto simply is even tough for experts.
By Connor Sephton
6mo ago
2m
Crypto News
Norton Crypto Feature Faces Fresh Wave of Criticism
The controversy lies in how Norton takes a 15% cut of the crypto that's generated through mining — and on top of that, users need to pay transaction fees.
By Connor Sephton
4mo ago
1m
Crypto News
Bitcoin Regulation Faces a 'Big Evolution,' Goldman Sachs CEO Predicts
The head of the banking giant also confirmed that the company is thinking about digital currency 'in a very proactive way.'
By Connor Sephton
1yr ago
1m
See all articles