Bitcoin and Energy: How the Shale Oil Boom and Flare Gas Could Transform Bitcoin Mining
Table of Contents
What Is Shale Oil and Why Is It Important?
How Bitcoin Miners Can Use Flare Gas
What Could Using Flare Gas at Scale Mean for BTC Miners?
Is it Realistic to Mine BTC at Scale With Flare Gas?
How Can Politicians Support This Process?
What Will Happen to Oil Prices and Shale Oil Production?
Conclusion
Bitcoin

Bitcoin and Energy: How the Shale Oil Boom and Flare Gas Could Transform Bitcoin Mining

What if we used the energy from flared gas to produce electricity? 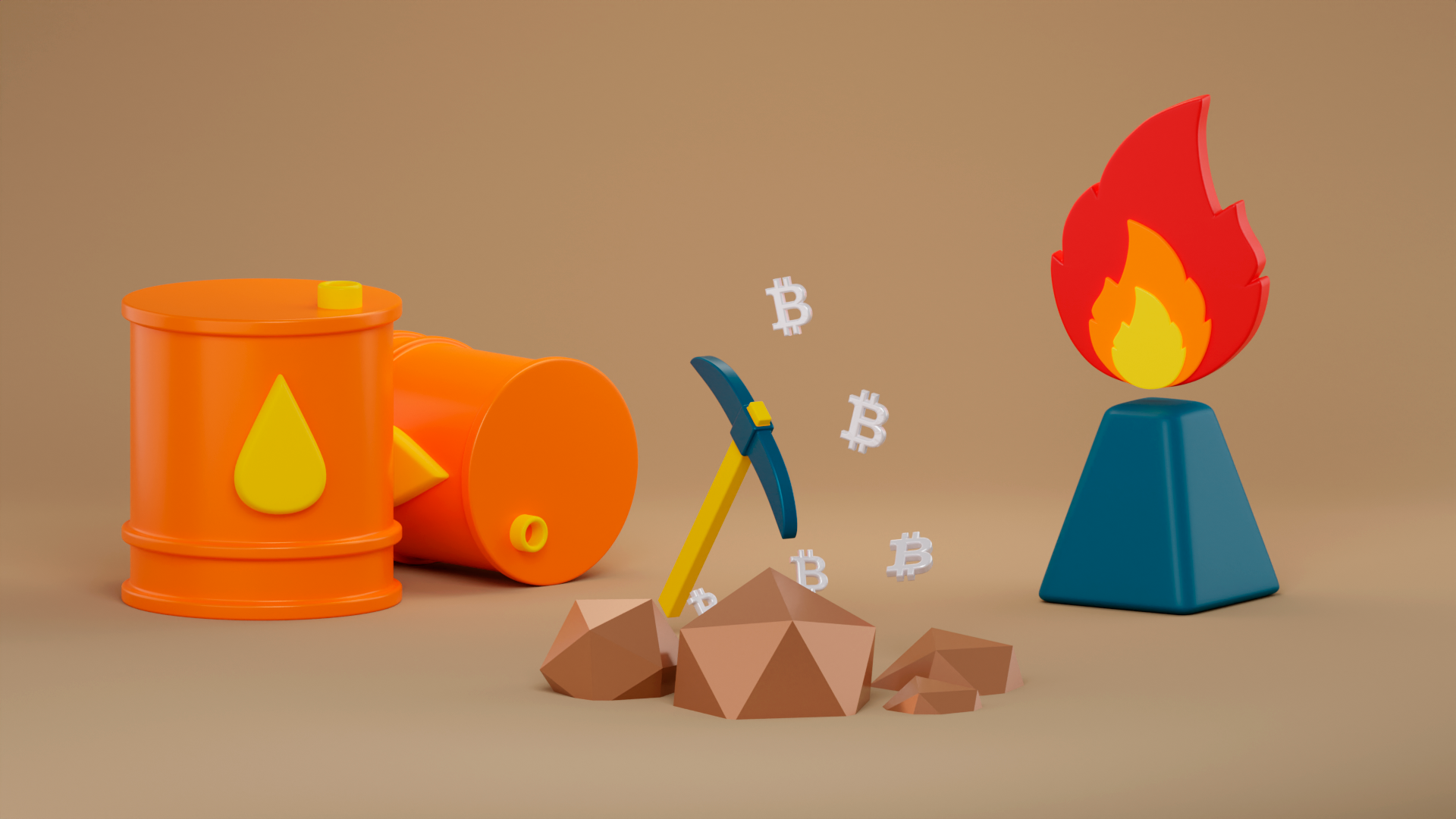 Give one pandemic, take one geopolitical standoff. If you're still hoping for things to slow down and "go back to normal" — they won't.

But all of that is okay as long as we have food on the table and gas in our tanks. And that's where we get to one of today's leading parts: shale oil. Shale oil is why Americans still pay "only" around $5 per gallon of gas and not $2 per liter like some poor Europeans.
But shale oil has also revolutionized crypto mining through something called flare gas.
Today, we're going deep, and this article will look at:
Subscribe

What Is Shale Oil and Why Is It Important?

That's when that guy was still in charge:

Some of you might be lucky to be too young to remember. The early 2000s was not only the time of U.S. presidents being attacked by pretzels but also of rising oil demand and shrinking oil supply. The world was in full globalization mode. Even a little hiccup with Islamic terrorism did little to stop the great oil rally right up until the Great Financial Crisis in 2008:
If what you produce suddenly fetches a lot more revenue, you can take more risk with your investments. Coupled with a low cost of capital (the interest rate was around 1.5% in the early 2000s), this means you are suddenly free to invest a lot more in projects you wouldn't usually invest in. That's what happened with the oil sector in the 2000s, and it shows in the spike in oil production in the 2000s:
Although shale oil was not yet produced during that boom, it laid the foundation for future production capacities. An important technical note:

Shale oil is produced by vertically drilling down into the ground and then horizontally across it. Pressurized water and sand are pumped through the drilled rocks, releasing countless tiny pockets of oil to be harvested by producers.

During this process, a byproduct is released: natural gas. Specifically (but not only) methane, which is terrible for the environment. And because we care about the environment, it should not be released into the atmosphere. Instead, it's flared (burned). That's not ideal either, and gas flaring makes up 1% of man-made carbon dioxide emissions. For comparison: evil Bitcoin mining only accounts for 0.08%.

But what if we used the energy from flared gas to produce electricity?

Turns out we can. Enter Bitcoin mining.

How Bitcoin Miners Can Use Flare Gas

The problem with flared gas is that it's not produced where it is needed. While shale oil can be pumped to any place, the gas needs to be burned right then and there, and the generated electricity transmitted to consumers. This means you need to connect the production facilities to the power grid at a sufficient scale, which is expensive since shale oil is produced in remote areas like North Dakota.

Wouldn't it be better if someone could just come there and take the generated energy off oil producers?

That is exactly what Bitcoin miners propose to do (and are already doing).
For instance, Crusoe Systems, a Denver-based firm, has developed portable and modular systems which are already connected to 20 data centers in oil fields in the U.S., with more contracts signed. The company also developed a solution to eliminate the need for flaring and instead monetize the natural gas by mining Bitcoin. It has duly raised over $350 million in a Series C valuation.
Since the emitted natural gas is a non-rivalrous energy source, it's going to be burned either way. Either no one uses the energy (in most cases), or Bitcoin miners do. Bitcoin mining simply monetizes the process or, in economic terms, puts a price on the negative externality that is flared gas.

How big is this problem then?

Big enough. According to the IEA, 142 bcm (billion cubic meters) of natural gas was flared in 2020 — roughly equivalent to the natural gas demand of Central and South America. Let's quote the IEA on what should be done:

"Many options are available to reduce flaring, but they will likely require new gas monetisation strategies, business models, and more stringent (and enforced) regulations."

Monetization eh? Sounds like you should talk to Bitcoin miners.

Since miners don't need too sophisticated of an infrastructure and can come to where the natural gas is emitted, this problem is interesting enough to draw the attention of companies like Gazprom, Russia's biggest energy company.
However, critics bemoan (mostly) two points. The first argument goes like this:

Fossil fuel companies should not get to pollute the environment, and we need to switch to green energies. Bitcoin mining is rewarding those evil oil companies!!

Nice try, but according to Peter Zeihan, an acclaimed geopolitical strategist, humanity still uses 83% fossil fuels to cover its energy needs. Since we'll need more energy in the future and not less, we should first think about how we can become more efficient with the stuff we have before we switch to more inefficient sources like renewables.
The second argument acknowledges that mining could solve a problem but:

"To be clear, the methane gas is still burned. It's just powering a crypto mining operation instead of getting dumped straight into the atmosphere. That's at least putting it to use, though whether it's being put to good use is another matter."

Basically "Bitcoin bad" all over again.

Just to repeat: mining BTC with flare gas is just putting a price on a negative externality. There is nothing inherently amoral about the Bitcoin network, even though it can and is obviously used for speculative purposes.

What Could Using Flare Gas at Scale Mean for BTC Miners?

The folks at ARK were friendly enough to research this question, so let's just quote them.

Could natural gas be used to power the Bitcoin network? Oh, you better think so. Many times over actually:

Even if we captured only the low-hanging fruit of methane emissions at well sites, it would be enough for the current Bitcoin hashrate:
Furthermore, mining with natural gas could bring down the average cost of mining:
This, in turn, opens the door for smart regulation to be implemented. Say governments put a price on those using energy sources that emit excess carbon dioxide. It would make Bitcoin mining greener since "dirty miners" are substituted with "cleaner miners." But add to that a mechanism that lets the public capture a share of the rents from mined BTC with natural gas (i.e. a tax), which would let the public benefit from mining BTC. Moreover:

ARK concludes that with correct implementation, this is a win-win situation for both miners and the general public:

Is it Realistic to Mine BTC at Scale With Flare Gas?

Precise numbers are hard to come by and it's mostly a guessing game, but the rough answer is yes, absolutely.
According to Nic Carter, co-founder of Coinmetrics, conservative estimates of flared natural gas in the U.S. in 2019 would have generated 76.9 TWh. Digicoinomist quotes the energy footprint of Bitcoin at the time of writing in August 2022 at 142.73 TWh. Even with these two figures three years apart, only flared natural gas in the U.S. would be enough to power a significant part of the Bitcoin hashrate.

Add that to ARK's estimates of only methane emissions being enough to mine BTC, and we can safely say that flared natural gas holds massive potential for BTC mining. In fact, natural gas is already making up an increasing part of the "Bitcoin energy mix:"

The increase in natural gas and decrease in hydroelectric energy is down to China officially banning mining and miners migrating from Chinese hydro to US natural gas. However, if the network managed to substitute the better part of coal-powered mining for flared gas, it would both drive miner profitability and make Bitcoin greener.

How Can Politicians Support This Process?

The full list can be found here. Bitcoin, of course, is still considered a "dirty" cryptocurrency compared to its proof-of-stake cousins. However, with the correct regulations and incentives for both miners and oil producers, mining with non-rivalrous energy could be a win-win situation.

What Will Happen to Oil Prices and Shale Oil Production?

Shale oil production is expected to rise until the end of next year. More shale oil means more potential for natural gas that can be flared. Moreover, shale oil producers will be thrilled by rising oil prices, which peaked at over $100 this year, even though the market has been cooling recently.

While though the IEA notes that the "Net-Zero Emissions by 2050 Scenario requires all non-emergency flaring to be eliminated globally by 2030," this would require a 90% reduction in flared volumes from current levels.

You be the judge of that, but mining Bitcoin and monetizing the emissions (and returning some to the public) would be a good compromise.

The price of BTC itself shows no relevant correlation to the price of oil. Moreover, BTC is mostly mined from other energy sources, so rising oil prices impact BTC only indirectly, like through an increase in production levels (possibly).
Overall, we are likely looking at the end of a structural oversupply in oil. Oil priced in gold was cheap for a few years, but with geopolitical tensions rising, this is changing:

Put simply: the more expensive oil is, the better for shale oil producers. The more shale oil is produced, the more natural gas needs to be flared. Good for Bitcoin miners that want to do that.

Mining BTC with flared natural gas is a potential gold mine for miners, with positive effects for the general public. Several big companies are looking into it, and mining with flared gas will likely only grow bigger in the future.

BTC mining is an underestimated and little explored way to monetize energy that would usually go to waste. Even the Bitcoin community itself seems to be still learning about how impactful mining really could be.

We'll look at the potential impact of BTC mining with non-rivalrous energy and its impact on the power grid in a future article.

Bitcoin
At Last! PayPal Unveils Much-Anticipated Crypto Feature
It's fair to say PayPal has been taking a slow, cautious approach to its crypto rollout — but the bear market doesn't seem to be putting the tech giant off.
By Connor Sephton
3mo ago
3m
Crypto Basics
Central Bank Digital Currencies (CBDCs) — A Map of the World
Central bank digital currencies are being talked about all over the world — CMC breaks down what exactly each country is doing (or not doing!) with their CBDCs.
By Decentralized Dog
1yr ago
26m
Crypto Basics
Newbie Catchup: The A-Z of NFTs
Yes — this is truly a guide of every big NFT project in alphabetical order.
By Daniel Phillips
11mo ago
13m
See all articles