Elon Musk Has Dig at NFTs, 'Steals' Bored Ape Picture and Says Some Users May Pay for Twitter
Table of Contents
Twitter Deal in the Works
Crypto News

Elon Musk Has Dig at NFTs, 'Steals' Bored Ape Picture and Says Some Users May Pay for Twitter

The world's richest man has changed his avatar to a collage of Bored Ape NFTs — and the image's creator wants Musk to remove it or give him a credit. 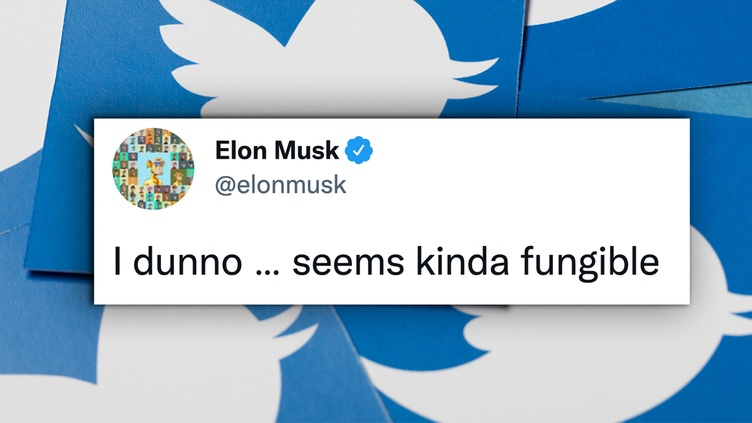 Elon Musk is tweeting cryptically once again — and this time, it appears he's having a dig at non-fungible tokens.

On Wednesday, he left his millions of followers scratching their heads with the message:

On the face of it, this suggests the world's richest man is questioning whether NFTs — which are designed to offer digital assets that are unique and provably scarce — match up to the hype.

Musk has also changed his avatar to a collage of Bored Ape NFTs — prompting a swift response from the man who created this image.

Michael Bouhanna, the co-head of digital art at the Sotheby's auction house, tweeted:

"As much as I admire your work I'd like you to remove your PFP I created for our Sotheby's sale. Or you credit me. Happy to send you the digital file minuted with the buyer approval."

While Musk's tweets once had the power to move memecoins like DOGE, the billionaire's missives are now influencing an entirely different set of altcoins.

Data from CoinMarketCap shows there was a sudden spike in the value of ApeCoin immediately after his profile picture was updated.

All of this comes as Musk's $44 billion deal to buy Twitter continues to progress.

Last night, he raised eyebrows by tweeting that, although the social network will "always be free" for casual users, he might introduce a "slight cost" for commercial and government users.

Sharing an analogy that explains his desire for charging such a subscription, he wrote:

"Ultimately, the downfall of the Freemasons was giving away their stonecutting services for nothing."

On Monday, Reuters also reported that Musk is in talks "with large investment firms and high-net-worth individuals" about securing additional financing for the acquisition — and using less of his personal wealth in the process.

Musk sold Tesla stock worth $8.5 billion last week, and is taking out a margin loan against his shares in the electric vehicle company, but he may have been spooked after $126 billion was wiped off Tesla's valuation during a single day of bruising trading on Wall Street last week.

Intriguingly, The Wall Street Journal is also reporting that Musk actually plans to make Twitter a publicly listed company once again — potentially in as little as three years.