Fewer than 150 Users Sign Up for Coinbase NFT as Marketplace Opens Up to Public
İçindekiler
Should Coinbase Be Worried?
Crypto News

Overall, the platform has just 1,276 users — rather tepid numbers considering this is one of the world's biggest crypto exchanges. 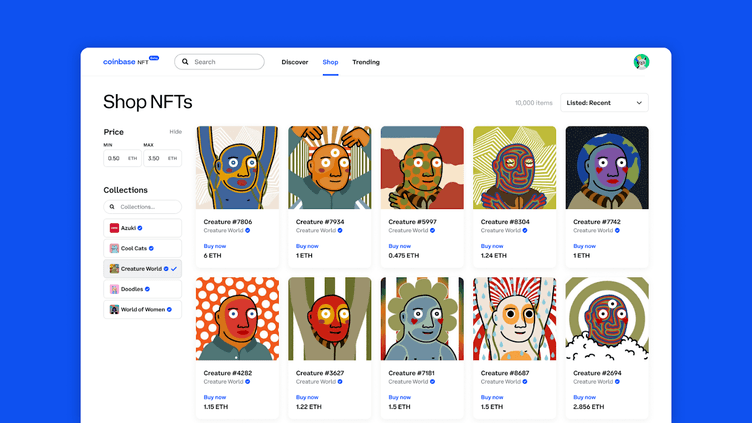 Coinbase NFT has opened up to the public — but on-chain data suggests not many people are signing up.

Figures from Dune Analytics suggest fewer than 150 people signed up for the new marketplace on Wednesday.

Overall, the platform has just 1,276 users — rather tepid numbers considering this is one of the world's biggest crypto exchanges.

Earlier this week, Coinbase had announced that the beta version of its NFT marketplace was now available for everyone.

Until that point, only a small number of people on the waitlist had been allowed to join.

Estimates have previously suggested more than four million people had joined the waitlist.

In total, 1,677 transactions have taken place since Coinbase NFT launched — with trading volumes of $612,000.

By comparison, data suggests there have been 56,000 transactions on OpenSea during the past 24 hours alone, with trading volumes nearing $105 million.

Should Coinbase Be Worried?

It's unlikely that Coinbase will be suffering sleepless nights because of these low user numbers… for now, anyway.

The company is still working on adding new features to Coinbase NFT — and a soft launch means developers can iron out any kinks without affecting too many people.

It comes amid (conflicting) reports over the health of the NFT market. While DappRadar painted a pretty rosy picture about the state of the industry in its April report, the Wall Street Journal recently ran a report that suggested sales are flatlining.

Nonetheless, the NFT industry is set to undergo an upheaval as a number of exchanges launch their own marketplaces — Coinbase and Kraken among them.

This could eat into the market share of giants such as OpenSea, especially if they offer compelling features or lower fees.

Coinbase has said that it will be offering zero fees for a limited time only. Users will also be able to create their own profile and illustrate it with the crypto art "that tells their story."

And in a nod to social networks, users will also be able to follow other profiles and post comments, as well as upvote or downvote conversations from others.

Back in January, Coinbase and Mastercard also formed a partnership to ensure NFTs can be easily purchased using credit and debit cards.