The memecoin says its posters will appear on 100 buses on the capital's streets, with 203 across the London Underground — but advertising rules mean the campaign is pretty vague. 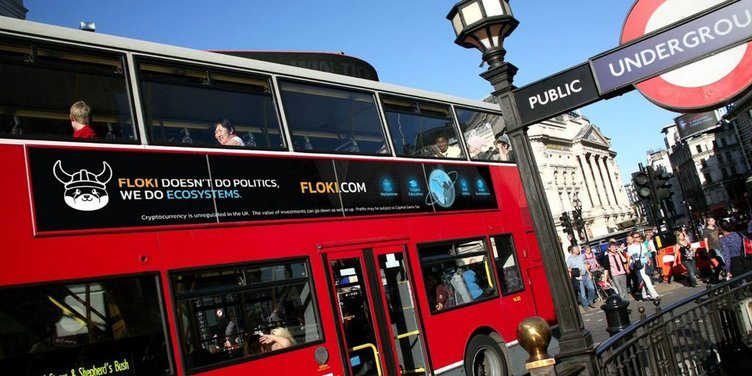 Floki Inu has begun a "new and aggressive" advertising blitz in London — less than two months after its previous campaign was banned by regulators.

The memecoin says its posters will appear on 100 buses on the capital's streets, with 203 "strategic placements" across the London Underground.

Collectively, Floki's team estimate that the ads "will be seen tens of millions of times" by commuters and tourists.

When compared with the brash "MISSED DOGE? GET FLOKI" slogan that landed the project in hot water with the Advertising Standards Authority, these ads are decidedly more vague.

One poster pictured on the side of a bus declares "Floki doesn't do politics, we do ecosystems" — a rather ambiguous line that does little to explain what the project actually does.

The same goes for a Tube poster that declares Floki is "powered by Ethereum and BSC." While name-checking these major blockchains may spark a little recognition among some consumers, there's little in the way of information as to how this altcoin differs from the many thousands of cryptocurrencies in existence.

In a nod to the ASA's concerns that previous ads failed to disclose the risks associated with crypto investments, the posters stress that digital assets are regulated in the U.K. and their value can go up and down — with profits subject to capital gains tax.

The campaign shows the challenge that crypto projects potentially face in getting their message across because of the ASA's rules — and the knock-on effect this has in educating those who know little about digital assets.

Monday's launch coincided with a 9.5% plunge in the value of Floki over the past 24 hours — an outsized loss when compared with major cryptocurrencies.

And while Floki's supporters are right that most assets have suffered a decline over the past six months, the memecoin's 93.5% fall from all-time highs of $0.0003437 set in November 2021 are far, far worse than what many cryptocurrencies have endured.

'Floki is Here to Stay'

Speaking to CoinMarketCap, the Floki Inu team says this latest campaign "is sending a strong message and making a statement that Floki is here to stay."

They also insisted that following ASA's rules hasn't been a source of frustration, adding:

"Floki is very particular about being compliant and working with regulatory bodies to ensure that our ads are in accordance with the law. The last campaign we did which generated a lot of controversy got every necessary clearance and approval from relevant bodies before it went. It wouldn't have run otherwise!"

When asked whether these ads will help everyday Londoners understand what Floki does, the project explained:

"We feel that there is a lot of misunderstanding about Floki and what it does. Many understand that Floki is a memecoin inspired by Elon Musk's shiba inu. As a result, they ignore everything else about Floki and label it as a memecoin without utility, which is not true."

They went on to point to an ecosystem that consists of a play-to-earn metaverse NFT game, a marketplace for non-fungible tokens, and philanthropic projects that include building schools around the world.

And pointing to estimates from the U.K. Financial Conduct Authority that 2.3 million Britons now invest in crypto, the project told CoinMarketCap:

"These are people who have a right to be informed and who can make crypto-related decisions by themselves without having Big Brother interfere in their ability to make their own judgements about their crypto choices... all the while ignoring obscene ads and other ads causing actual damage to people's lives."

Crypto News
Another Devastating Blow for India's Crypto Community as Ban Threat Returns
A complete ban on investing in digital assets is reportedly coming — with trading on foreign exchanges prohibited.
Автор: Decentralized Dog
год назад
2м
Crypto News
Man Who Tied Woman Up and Stole $3M in Crypto Arrested — 7,000 Miles Away from Attack
Prosecutors say Zhang Tianzhe threatened to torture the victim with a knife — and used an iPad hanging around his neck to give instructions.
Автор: Connor Sephton
2 месяца назад
2м
Crypto News
The Worst-Performing Altcoins in September
Many smaller cryptocurrencies ended up nursing double-digit losses in a brutal month for the markets — but some altcoins came up smelling of roses.
Автор: Leo Jakobson
10 месяцев назад
3м
Все статьи