He described worrying about it as "foolish" — and said, if Jeff Bezos or Mark Zuckerberg had offloaded their stock and tried to time the market over the years, they would not be billionaires. 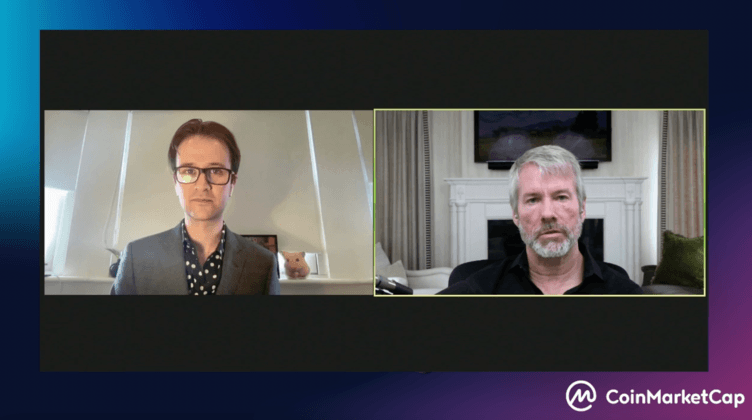 Michael Saylor has shrugged off Bitcoin's plunge from $68,800 to $29,000 — even though this has wiped $4 billion from the value of the BTC that MicroStrategy holds in reserve.

The CEO firmly believes that a single Bitcoin will be worth millions of dollars one day — meaning that, in the long term, the downturn over the past six months is a moot point.

But during CoinMarketCap's The Capital conference, he was asked whether he was daunted by the fact that MicroStrategy is now nursing an unrealized loss on its 130,000 BTC.

The business intelligence firm is currently $240 million in the red after spending $3.9 billion on its crypto stash. But back in November, its Bitcoin would have been worth $7.8 billion.

When asked whether this bothered him, his answer was simple: no.

He described such a mentality as "foolish" — and said, if Jeff Bezos or Mark Zuckerberg had offloaded their stock and tried to time the market over the years, they would not be billionaires.

"If you look at all the richest people in the world, they're not traders. I mean, Bill Gates, Jeff Bezos, Elon Musk, Mark Zuckerberg, Larry Page… name the person who traded their way to that situation. You can't really do it. Trying to time the market is ridiculous."

Crypto News
Institutional Interest in Digital Assets is Growing Fast, Fidelity Says
Institutional investors in Asia were the most likely to have already taken the plunge.
Por Leo Jakobson
1 year ago
2m
Crypto News
Will Mt. Gox Victims Finally Get 200,000 BTC?
For several months, affected customers have been able to have their say on how the funds should be distributed.
Por Connor Sephton
11 months ago
2m
Crypto News
Grubhub Offers Bitcoin Rewards for Food Deliveries
Grubhub — which allows users to order food from restaurants and get it delivered — has entered into a partnership with Lolli, a firm giving consumers free BTC for shopping at eligible stores.
Por Connor Sephton
9 months ago
2m
See all articles