Impact of ApeCoin on the Booming NFT Industry
Índice
NFT Market Valuation and Future Prospects
Investment Bank Jefferies Forecast
The Booming NFT Art Sector
How Yuga Labs and Bored Ape Yacht Club Come Into Play
The Rise of BAYC
Play-To-Earn and Metaverse Ventures
ApeCoin Launch
ApeCoin Tokenomics
Purpose of the Ecosystem
The APE Foundation and the DAO Board
Gaming and ApeCoin
Where To Buy ApeCoin?
NFTs

Impact of ApeCoin on the Booming NFT Industry

With the most valuable NFT collections under the Yuga Labs umbrella, Otherside metaverse land sales and launch of ApeCoin, what does this bring to the exponentially growing NFT space? 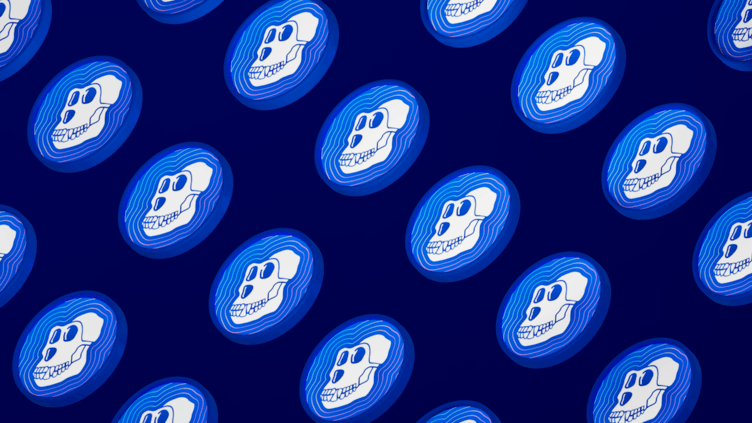 Non-fungible tokens (NFTs) have made it possible for the current state of the digital space, Web 2.0, and the relatively new generation of the internet, Web 3.0 to converge. NFTs have become increasingly popular beyond the retail crowd, as more corporations are getting onboard. These are digital tokens stored on the blockchain and can represent digital art or tokenizations of real-world assets. However, most NFTs right now consist of digital art, collectibles, photography, audio tracks and even sport trading cards.
Before tokenization, digital art or images on the internet were non-exclusive, or fungible, meaning that they can be downloaded and stored by anyone on the internet by right-clicking and saving it.

NFTs, however, make the goods unique in the sense that although anyone can have access to the pieces by downloading them or taking screenshots, they cannot be deemed as “owners” of the token. Basically, it is the certificate of ownership that one pays for, rather than the token itself. Unlike Bitcoin and other cryptocurrencies, where every coin is worth the same and one coin can be exchanged for another, each non-fungible token is one of a kind where its worth is also unique and exclusive.

According to the annual NFT market valuation report by Chainalysis, for 2021, the valuation of the NFT market was $41 billion. “So far in 2021, users have sent at least $26.9 billion worth of cryptocurrency to ERC-721 and ERC-1155 contracts, the two types of Ethereum smart contracts associated with NFT marketplaces and collections,” notes the report.

CoinDesk reported Jefferies’ forecast for the NFT industry under a team of analysts led by Stephanie Wissink. The bank raised the potential market capitalization for the NFT industry to $35 billion for 2022, and well over $80 billion for 2025.
The NFT space is a high-growth sector in terms of market capitalization and valuation forecasts, with more celebrities and influential figures hopping into the space, especially thanks to the prevalence of the metaverse. Metaverses like Decentaland and The Sandbox are seeing sales of virtual land bought by influential figures and companies in an attempt to establish their brands in the virtual world. NFTs also have a strong appeal to people not necessarily interested in cryptocurrencies, thereby helping to onboard the next wave of users to the crypto space.

According to Statista, sales of the NFT art sector peaked in September last year at over $840 million. Since then, sales have dipped to around $37 million in March, the lowest since July 2021. However, the digital art world has been stagnant since the inception of the internet, in spite of its popularity on social media. Unlike the art space in the real world which has real-life auctions and art gatherings, the digital art world was limited to independent artists taking commissions for the most part. The value of digital art pieces, therefore, never reached the levels of pieces by popular real-life artists.

NFTs solved that issue by turning digital art into a luxury that can be owned exclusively, and more importantly, shown off. As most real-life art, and luxury goods for that matter, is often bought as a signal of social status, tokenized digital artwork is also purchased primarily for the ownership that it offers. Some NFTs also act as a token to a gated digital community of other holders — and one of the most popular communities is the Bored Ape Yacht Club (BAYC).

Yuga Labs, the creators of BAYC, is a Web3 native company that also owns the IP of the other top collections such as CryptoPunks and Meebits. BAYC is a collection featuring JPEGs of apes that appear bored, although it is more than just a profile pic (PFP) collection. It acts as a gateway to the BAYC community, which features real-life events like meetups, parties and even a BAYC-themed restaurant in California.

The Rise of BAYC

These apes quickly took over social media as many influential celebrities in the entertainment industry, such as Paris Hilton (BAYC #1294), Jimmy Fallon (BAYC #599), and Eminem (BAYC #9055), athletes such as Neymar Jr. (BAYC #6633), Shaquille O’Neal (BAYC #14452), and Steph Curry (BAYC #7990), social media influencers such as Logan Paul (BAYC #1442) and corporate tycoons such as Mark Cuban (BAYC #1597) and Adam Draper (BAYC #9132) purchased a unique ape with special characteristics. Many celebrities switched their Twitter avatars to JPEGs of Bored Apes that they bought, adding to the popularity and hype around BAYC.

After launching in April 2021 with a mint price of 0.08 ETH and gaining popularity throughout the year, BAYC still hasn’t lost its steady footing in the first quarter of 2022. BAYC managed to flip CryptoPunks, which launched in June 2017, to become the most valuable NFT collection by market capitalization. Currently, the least priced collectible from Yuga Labs’ BAYC is valued at over $320K, or a floor price of 115 ETH. The collection consists of 10,000 NFTs in total, with a market cap of 1.46M ETH.

With an estimated worth of $5 billion, Yuga Labs just launched ApeCoin that would enable play-to-earn (P2E) gaming built based on the token. The token launch was highly anticipated and has been hyped by Yuga Labs for quite some time now. However, while the launch was coordinated by Yuga Labs, the strategic direction and distribution of ecosystem funds will be governed by the ApeCoin DAO.

In March 2022, Yuga Labs shocked the NFT world by acquiring the Meebits and Cryptopunks collection from Larva Labs, both the top 10 most valuable NFT collections. The future plans include a metaverse built around the IP owned by Yuga Labs. However, it also requires heavy regulatory maneuvers, considering how The Securities and Exchange Council (SEC) stance over NFTs as financial assets is still uncertain.

ApeCoin, released on 17th March 2022, is the “primary token for any future products and services” launched by Yuga Labs. The token is built on the Ethereum ERC-20 standard token. Alongside providing governance services, the token also offers utilities to holders within the Yuga’s extended universe. The token will expand the company’s Web 3.0 ventures in many social, commerce and gaming services, including the P2E  games and metaverse initiatives that the company is shifting towards.

ApeCoin (APE) has a fixed total supply of 1 billion tokens. The supply of APE is distributed as follows:

Purpose of the Ecosystem

The ecosystem has an open source protocol layer that serves to incentivize, govern and provide accessibility to the developers and holders. The developers can introduce their own apps and products in the ecosystem through APE. The holders will be allowed participation in the DAO and exclusive sectors such as merchandise and special events will be available to them. APE also cuts back on the participatory intermediates, offering a decentralized system.

The APE Foundation and the DAO Board

The APE Foundation was formed to support the running of the ApeCoin DAO.

"The Foundation facilitates decentralized and community-led governance and is designed to become more decentralized over time. It is tasked with administering the decisions of the ApeCoin DAO  and is responsible for day-to-day administration, bookkeeping, project management, and other tasks to ensure the DAO community’s ideas have the support they need to become a reality."

The members of the ApeCoin DAO council include big names such as FTX’s Amy Wu, Sound Ventures’ Maria Bajwa, Reddit founder Alexis Ohanian, Horizon Labs’ Dean Steinbeck, and Animoca’s Yat Siu. Everyone that owns a token will get voting abilities to the DAO, the decisions of the referendum being carried out by a council made specifically to “carry out the decisions of the community,” according to a spokesperson.

As mentioned prior, the token will not be launched by Yuga Labs itself, however, the ownership of close to a quarter of the tokens will go to Yuga and the BAYC founders. Members of the board can have the final say in the ecosystem funds, partnerships, future ventures, proposals and many more.

The ApeCoin token has numerous services, as mentioned previously, however, its full potential is still unknown as it is still in its early stages. One thing that the company was very certain about was that ApeCoin would feature heavily in new gaming ventures that Yuga Labs is working on.

Following the leak of Yuga Labs’ gaming projects by Twitter user @LeonidasNFT, many details about Yuga Labs’ expansion of the BAYC universe came to light. This would be done by the creation of MetaRPG, which is a gaming metaverse. Users of the MetaRPG will be allowed to use their own assets in the game.

Yuga Labs CEO Nicole Muniz has yet to give a statement either affirming or declining the legitimacy of the supposed pitch deck. In an interview, Muniz did, however, gave a general statement, saying:

“I don’t know how big Bored Ape Yacht Club can be, that’s not to say that I don’t imagine it to be big, but I think — I hope — Yuga will be big and that we will be able to create lots of things that are unique and special and speak to the greater community in different ways.”

Many titles are currently in the works for gaming, one unannounced title being in development with nWay (NWAY), a gaming studio based in San Francisco. nWay has had projects with licensing IPs from big names such as Power Rangers and WWE. The play-to-earn mechanism will allow users to play the game to unlock free tokens as rewards for their time spent playing the game. Another play-to-earn title that Yuga Labs is working on is with the partnership of Animoca brands, in which ApeCoin will provide services. It has been confirmed that ApeCoin will be launched in Benji Bananas, a mobile P2E game by Animoca.

On May 1, 2022, land sales for Otherside went live; the highly anticipated launch caused gas prices on the Ethereum network to spike and resulted in transaction fees of over $4,000. Yuga Labs’ metaverse project consists of 200K plots of land, which the Genesis drop will take half of. 70% of the plots will go public, while 30% goes to holders of the BAYC and Mutant Ape Yacht Club (MAYC). A new species of creatures known as Kodas will be inhabiting 10% of the metaverse lands, although users are still unsure of what utility Kodas will bring.

Where To Buy ApeCoin?

The APE token is to be available for trading on many major exchanges such as Binance, Coinbase, FTX, Kraken, Gemini, OKX and Binance US. Currently, the share of liquidity resides on Binance, in the trading pairs of APE/USDT and APE/BUSD.

Tech Deep Dives
What Is BitDAO (BIT)?
CoinMarketCap takes a deep dive into BitDAO (BIT), a project owned by BIT holders. It aims to make contributions towards the growth of the DeFi ecosystem.
Por Hassan Shafiq
11 months ago
5m
Tech Deep Dives
What Is Splinterlands & How Do You Play?
CoinMarketCap takes a deep dive into Splinterlands, a collectible card game built on the Hive blockchain where players can trade, buy or sell digital assets to gain in-game rewards.
Por Hassan Shafiq
11 months ago
6m
NFTs
Non-Fungible Thursdays: What Happened in NFTs This Week? [June 16, 2022]
CoinMarketCap and Nansen look at the most exciting events in the NFT space — from Seth Green paying $300K for his stolen BAYC #8398, to Netflix's 'Stranger Things' NFT plans facing backlash.
Por Andrey Sergeenkov
1 month ago
9m
See all articles