Crypto Adoption in Pakistan Is Growing Rapidly Despite Ban

Despite high inflation rates and mass adoption of crypto in the country, Pakistani authorities are still not sure how to deal with one of the biggest asset classes. 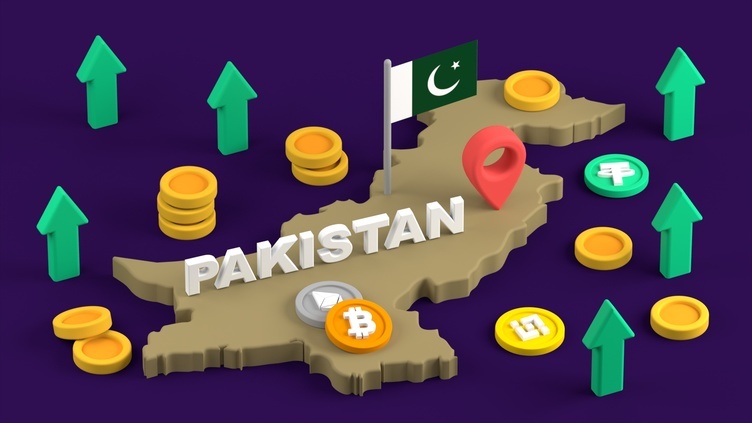 Being the third country on the list of global crypto adoption hasn’t helped the case of crypto in Pakistan. Pakistan's central bank proposed a ban on the trading of cryptocurrencies a month ago - a directive that hasn’t been acted upon.

Questions are being asked left and right as to why the Pakistani Govt. is hesitant towards the legalization of cryptocurrencies, a sector that has more holdings than its central bank’s foreign reserves.
The same concern of crypto legalization was shared by Pakistan’s neighboring country India, however, the South-Asian country changed its stance by presenting crypto laws in the parliament (and imposing a 30% {unwelcoming} tax on local crypto accounts). This decision can serve as an exhibit for Pakistan to follow and not only ‘legalize’ crypto but also present laws that help its economy in the long run, seeing that the world is now realizing the importance of crypto, amid the ongoing situation between Russia and Ukraine.

To understand why Pakistan is hesitant towards legalizing crypto, let’s dive into history and explore the timelines which the Pakistan Govt. shared with crypto.

2017 will always be remembered as one of the massive bull runs of the crypto market. After all, it is the year when Bitcoin jumped from $900 to $20,000, along with many altcoins that followed their leader and made many people rich in a short span of time.
The govt. of Pakistan imposed a ban on the trading of cryptocurrencies which is why Pakistani users failed to benefit from this amazing run. The Federal Investigation Agency (FIA) launched investigations against Bitcoin and cryptocurrency holders to demotivate the use of digital currencies, as per the directive of the State Bank of Pakistan (SBP) who refused to recognize any form of digital currency.

Bitcoin slumped to the $3000s in 2018, as the world became suspicious of it as a reliable investment asset due to the volatility surrounding BTC and the world of cryptocurrencies.

Meanwhile, things remained the same for crypto enthusiasts in Pakistan as the state bank issued a circular on the “prohibition of dealing in virtual currencies”.

A circular issued by one of the biggest commercial banks in Pakistan, Meezan Bank Limited.

All the banks of Pakistan were instructed to report any 'suspicious' crypto transactions to the Financial Monitoring Unit (FMU). Did these measures end up discouraging the use of cryptocurrencies in Pakistan? The answer is a solid “NO”. On the contrary, people became more curious and crypto trading continued through other ways, some of which have been outlined in our guide on how to buy Bitcoin in Pakistan.

Bitcoin made a comeback and reached the level of $13,000 in 2019, as the cryptocurrency lovers had a reason to believe in the digital currencies again.

In Pakistan, however, the crackdown against cryptocurrencies worsened as the country shut down nine firms dealing with cryptocurrency. However, this is also when a ray of hope was witnessed by crypto lovers in Pakistan because the country announced to launch a new digital currency following FAFTA's request. While this 'digital currency' was never launched, it did give a sigh of relief to crypto holders in Pakistan that the authorities are opening up to the world of virtual currencies.

2020 marked the year when most of us were introduced to the world of cryptocurrencies. The reason: Bitcoin rocketed past $20,000, shocking the entire world.

In Pakistan, this move didn't go unnoticed as Pakistan's SEC discussed the cryptocurrency regulation and to the surprise of everyone, the central bank of Pakistan came clean by announcing that it never imposed any ban on cryptocurrencies. It was all Pakistani media's false reports. However, the circular issued on the official website of the State Bank of Pakistan says otherwise (image attached below).

Whales (or the more appropriate term: institutional investors) were in no mood of pausing the bull run in 2020. BTC continued to rise until it touched the $60,000 mark before falling back to $30,000 only to go up and hit $69,000.
Owing to this massive rise of crypto, a high court in Pakistan approved a committee to explore the viability of making cryptocurrencies legal in Pakistan. However, criticism was made when committee member, Ali Farid Khwaja, a partner at Oxford Frontier Capital and chairman of KASB Securities, said:

"Half the members had no clue what it was and didn't even want to understand it".

This statement explained why in 2021, there was no move by the Pakistani authorities towards legalizing crypto and encouraging people to invest in the world of virtual currencies.

Bitcoin is recovering swiftly after suffering a major hit in what most experts are calling a ‘small bear trend. It is now ranging in the $40,000 zone and other cryptocurrencies are also moving back up.

In 2022, Pakistan’s neighboring country, India, legalized crypto and imposed a 30% tax on digital currencies. However, Pakistan’s central bank again made the headlines as news started floating that it is planning to ban Bitcoin. It is March 2022 and this hasn’t happened, however, the attitude of the Pakistani government towards crypto remains non-serious and laughable.

Yes, critics may argue that the Science Ministry has partnered with the Binance, the biggest crypto exchange, for Future Fest 2022 (a tweet that was later deleted), however, the stance of the government is still ambiguous on this matter

Making a case for crypto in Pakistan is easy, the country ranks third when it comes to global crypto adoption, mostly due to the high inflation rates. The rate of inflation rose to 13% in January 2022 and is still rising.

Many countries in the world are moving towards the legalization of cryptocurrencies, considering the opportunities it provides, especially to developing countries. The government of Pakistan may call cryptocurrency the “magic money” that should be discouraged (or banned repeatedly as evident in the timeline), but the youth of the country is clearly not on board with its decision, as can be seen in the crypto adoption index chart.

Crypto Basics
Week in DeFi: Lending Protocols Ship, a Bustling Cosmos and Proof-of-Innocence
Check out our weekly roundup packed full of DeFi tweets, news and alpha you don't want to miss out on — as protocols continue to ship amidst the consolidation of the recent rally.
Por 0xKira
15 hours ago
5m
Crypto Basics
Week in DeFi: Frax Leads LSD Race, MetaMask Hops on the Bandwagon
Another exciting week in DeFi as markets rally and the LSD narrative heats up — check out our weekly roundup of the most important DeFi tweets, news and alpha you can't miss out.
Por 0xKira
5 days ago
4m
Crypto Basics
What Are Cryptocurrency Hedge Funds?
Cryptocurrency hedge funds work much like traditional hedge funds in that they allow individual investors to contribute to an expert-managed investment pot.
Por Daniel Phillips
1 week ago
6m
See all articles