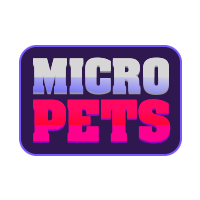 If you would like to know where to buy MicroPets at the current rate, the top cryptocurrency exchange for trading in MicroPets stock is currently PancakeSwap (V2). You can find others listed on our crypto exchanges page.

The team has taken a high-end approach that eclipses most other projects in this space. For example, they chose Certik with Skynet for their audit over less-expensive options. This sent a clear signal to their early supporters that the team emphasizes quality in everything they do. Furthermore, they announced just two weeks into their project they were partnering with a major game development company, Cubix, on their custom-built P2E game-MicroPets Runner. Finally, the team announced their future strategic vision of developing towards the Metaverse (Petropolis), ensuring MicroPets remains a forward-thinking and innovative project.

Users can stake their NFT's in the MicroPets staking pool, earning rewards based on the rarity and staking power of their pet. There are several different rankings of MicroPets: Common, Uncommon, Rare, Epic, Legendary and Mythic. Based on this rarity, users have a staking power of 1X to 5X, further amplifying their MicroPets earnings. Users can stake or sell their pets in a stack, which is extremely unique for the space.