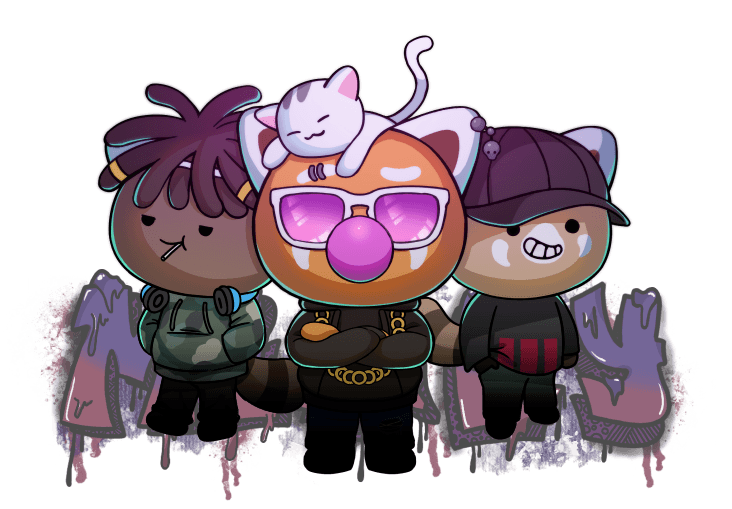 Mikey is a badass Red Panda with a dream: to connect passionate outsiders from around the world and build a community that shares in success together. As Mikey grows in popularity, the holders receive increased benefits.

Staking your Mikey gives your access to PlayDapp exclusive properties and can help you earn $PLA, PlayDapp’s token available on all major trading nets. When Mikey reaches Superstar Status, they take you along for the ride.

Mikey is all about connecting people through the power of music.

As a rebellious teenage hipster, his career as an up-and-coming Underground Mikey has just started. He knows he’s got the starpower to take him and his friends to the top. As he drops more beats, he builds a bigger following and earns more spots as the Rising Star Mikey people line up to see.

But he’s got his eyes on the world stage. He’ll keep spinning his tracks ‘til he’s reached Superstar Mikey status, and has the whole planet grooving together.

PlayDapp always has exciting news coming around the corner. Stay tuned for updates about Membership benefits in the future.

$PLA is an ERC-20 token on the Ethereum blockchain and PlayDapp’s native utility token. $PLA is used to buy, sell, and trade game items and NFTs on the PlayDapp Marketplace. $PLA is accepted on all major exchanges, including Binance, Coinbase, and more. $PLA can be sold for its equal value in fiat currency.

PlayDapp plans to airdrop a total of 10,000 additional Mikeys to enrich the member’s ecosystem in line with the expansion of services and benefits (Including 2% of marketing volume). Mikey NFT holders can use their Mikeys on a new P2E game which will be launched this month! (December 2022)

Among the 10,000 additional Mikey NFTs, there will be 5 Rising Star Mikeys!  The remaining 9,995 Underground Mikeys will be provided randomly. Here is how users can get their Mikeys.

Challenge your luck with the new minting experience of getting NFTs through the PlayDapp Land, visualized in 3D, plus a new grade of Members+ Rising Star Mikey collection will be given to only 5 wallets!

All existing Underground Mikey NFT Stakers with Mikey number 1-10,000, who staked their NFTs by December 12th at 12:12 PM (UTC+0), are qualified for a ‘Bamboo Juice’ NFT. The ‘Bamboo Juice’ airdrop for the relevant wallets will be sent directly to the user’s wallet in December (dates will be announced on PlayDapp’s official Twitter, Discord & Medium Accounts).

Follow us on social media to get the latest news!

These 5 altcoins are presenting long trade opportunities during a time when the rest of the crypto market has seen prices fall. Read more.

Chief Economist Peter Schiff stated that there was more downside to Bitcoin than just the 70%. BTC’s predicted fall to $5,000 is overpriced.