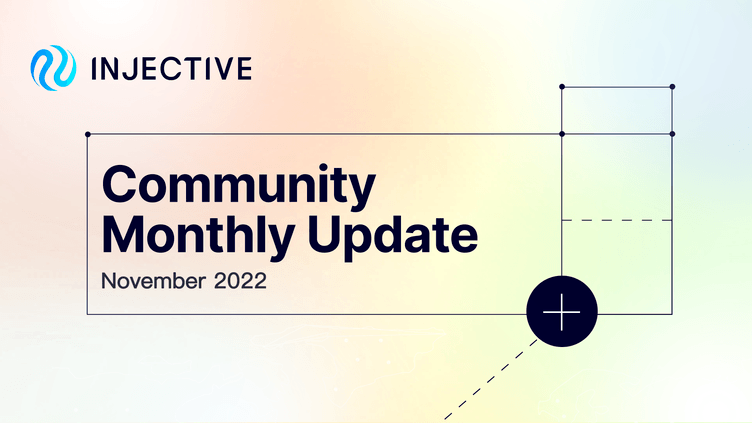 November was a memorable month for Injective as it celebrated its one year anniversary of mainnet. As the first sector-specific blockchain optimized for building DeFi applications, Injective has reached a number of significant milestones since the mainnet launch and ushered in a new era for all of Web3.

During the past month, Injective’s ecosystem of dApps, integrations, validators and institutions continued to grow. As it enters its second year, Injective continues on its mission to democratize finance through decentralization.

For a recap of November, check out this highlight reel 👇

On November 8th, 2021, Injective’s mainnet went live. Since then, Injective has launched an interchain smart contracts layer, processed over 130 million transactions, implemented an innovative token burn model and completed one of the largest capital raises in the industry from leading institutions. It also became one of the leading Cosmos IBC zones, integrated with prominent projects to increase interoperability, introduced some of the fastest growing dApps and much more.

The Injective community has accomplished a great deal in just its first year since mainnet, and there is far more in store for the upcoming year as Injective seeks to become bigger than ever before!

Fiat on-ramp to Injective is now complete thanks to the integration with Kado! Any dApp built on Injective can now onboard mainstream users using fiat from bank accounts in 150+ countries, with one instant transaction.

Binance Custody has integrated Injective and the native INJ token in order to enable unprecedented institutional access for the Injective ecosystem. With this integration, Binance Custody also introduces its first-ever staking feature by enabling staking support for the INJ token.

The Binance ecosystem has been a leading supporter of Injective since day one. Injective was originally incubated by Binance Labs and later went on to Binance launchpad. This integration further expands Injective’s global presence by providing a gateway for institutional onboarding.

The Project X Private Beta is now here and early access is open only to Ninja Pass holders.
First unveiled during Cosmoverse 2022, Project X will revolutionize the way in which both developers and users can access finance to bring true mass adoption. Project X is a combination of strategy vaults for passive yield generation, AMMs with impermanent loss (IL) protection and a one-click launchpad.

Ninja Pass holders will be able to view, test and engage with the protocol before anyone else in the community.

If you are a lucky holder of Ninja Pass, please fill out this form to gain access to the private beta.

Qwerty Exchange, one of the exchange dApps built on Injective, enabled automatic signing, made possible by Injective’s AuthZ module. Users can choose their sign modes by specifying the time that they want to grant access to the wallet.
Qwerty is also working on a mobile application. Stay tuned!

With the 2022 World Cup underway, Frontrunner’s World Cup prediction markets are now live! Now it is the perfect time to stand behind your team and test the best sports prediction app on the market 👇

The Coin98 Super App has integrated Injective to bring forth a new age of interconnected finance. Users can access novel dApps built on Injective via the Coin98 wallet app or browser extension. This means prominent DeFi applications, such as Helix or Frontrunner, can be accessed directly from Coin98, enabling millions of new users to access the Injective ecosystem.

The Camelot mainnet upgrade was completed on November 22nd. The upgrade included:

This month, Informal Staking onboarded to Injective as a new validator, joining a network of 40 active validators. Users can delegate tokens and check validators status on the Injective Hub.

As Injective continues to grow, and more transactions are made on its blockchain, validators help to speed up transaction times and provide more security to the network.

*Current data shows Injective has achieved an average block time of 1 second, making Injective one of the fastest blockchains in the industry.

With the media focusing in on the recent news surrounding FTX, Injective Labs CEO and Co-Founder, Eric Chen, provided commentary to major publications on the fallout and potential further impact to the larger crypto industry.

Eric also shared insights to the press for educational pieces, providing further clarification on the difference between centralized and decentralized finance.

Eric provided commentary to CoinTelegraph on what lies ahead for crypto after the FTX downfall.

“We are likely only in the initial innings of the eventual contagion that will come to light for centralized platforms,” said Eric Chen, chief executive of Injective Labs.

Eric spoke to Reuters on the recent FTX crash and what it means for the world of decentralized finance moving forward.

CEO and co-founder of Injective Labs, Eric Chen, was interviewed by The Street Crypto on the recent midterm elections and its potential impact on the crypto industry.

Showcasing the importance of education, Eric spoke to Bankrate to provide further context on the crypto industry and why not all crypto is built the same.

Eric also spoke to Fintech Times in an educational piece, with remarks included in a roundup on “What Are Smart Contracts Replacing And Why Are They So Revolutionary”.

Helix was featured on one of the most popular crypto newsletter Milk Road Dailyread by over 225,000 members.

The Injective Labs team joined multiple Twitter Spaces during the month of November to discuss the latest contributions to Injective, speak to ecosystem partners and provide commentary on the current industry.

Here is a roundup of the shows and Twitter Spaces from this month:

🥳 Keep track of future updates on the Injective Discord, Twitter and Telegram.

Injective is a lightning fast interoperable layer one blockchain that brings Cosmos and ethereum interoperability to the premier finance applications. Injective provides developers with powerful modules for building exchange, DeFi, derivatives & Web3 apps. INJ is the native deflationary scarce asset that powers the Injective Protocol and its rapidly growing ecosystem. Injective is incubated by Binance and is backed by prominent investors such as Jump Crypto, Pantera and Mark Cuban.

Are We Losing The Base Of Crypto Decentralization?