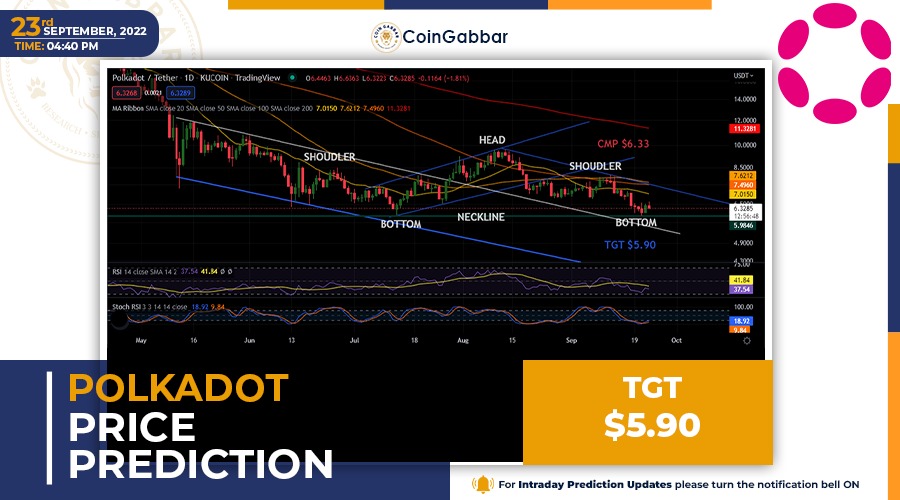 The coin's current price is about $6.38, with a total loss of 0.94% during the intraday trading session.

The bears have taken control of the Polkadot market. Polkadot's price drop is a significant success for the bears. Given how successfully the bears are executing each strategy and the price's continuous slide, it appears that the bulls have given up for the day. Because the bull isn't moving, the bears are making significant progress toward their targets and attaining them rapidly.

The bears' efforts have now come out, giving investors a cost effective investment. Investors are hoping for a downward trend now that the coin has started a negative trend. Now we must wait and see what the bulls do next.

Polkadot price analysis on the 4-hour price chart shows that the coin has dropped for the day as the price is decreasing, but bulls are also attempting to make a comeback, Nonetheless, the price has not yet been raised; a very little green candlestick can be seen on the chart, which is a positive indicator; however, breaking out of the bearish cycle remains difficult due to the slow price oscillations. If the selling pressure continues, the last green candlestick may turn red.

DOT is behind by a daily moving average of 20, 50, 100, and 200 days. The fall of the exponential moving averages of 20 and 50 days generated a negative cross. The decline in volume reflects the increasing selling pressure.

The one-day and four-hour Polkadot price analysis indicates that the cryptocurrency is on a downward trend, with bears in control. The bears have managed to reduce the coin's value to $6.38. The currency is predicted to fall in value since market selling activity is severe, and technical indicators are also pointing in the bears' favour.

If DOT fails to break through the $6.60 resistance level it may begin a new fall. On the downside, The